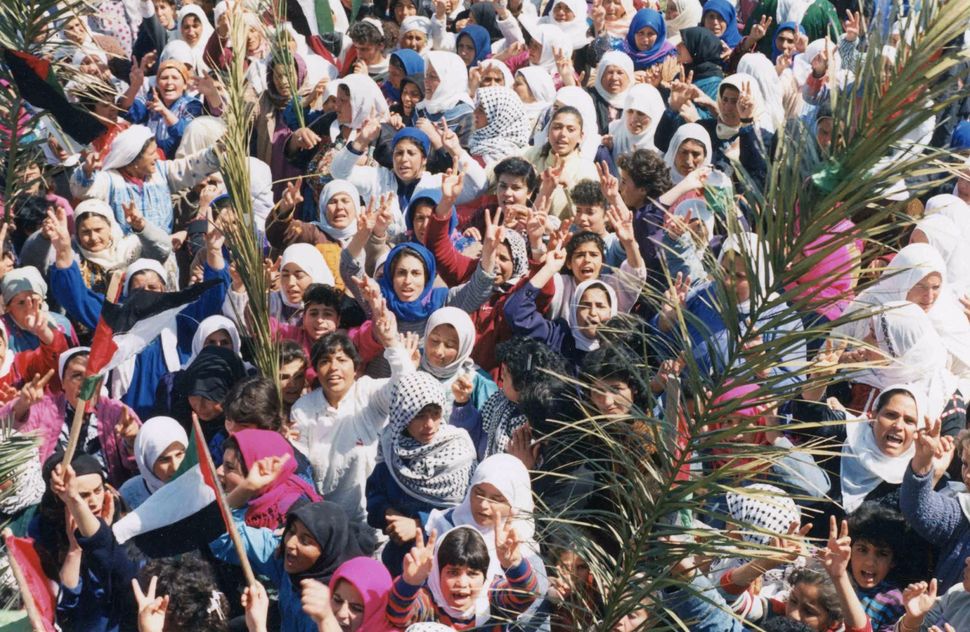 Thirty years ago, the Occupied Palestinian Territories erupted in a years-long uprising, which we would come to know as the First Intifada. Those old enough to remember it likely have a few dominant images seared into their memories: stones and Molotov cocktails hurled at soldiers; burning tires; military operations. And at the end of it all, a groundbreaking handshake on the White House lawn between then PLO Chairman Yasser Arafat and Israeli Prime Minister Yitzhak Rabin.

Today, on the thirtieth anniversary of the First Intifada, it’s time to ask, did we get the story right? This critical reflection is all the more relevant as protests take place across the Occupied Palestinian Territories in the wake of Trump’s recent decision to recognize Jerusalem as the capital of Israel and move the US embassy there.

And the answer is, we did not get it right.

Unlike the imagery we associate with it, the vast majority of the uprising was in fact characterized by incredible, highly effective and sustained grassroots organizing, with even the Israeli army citing 99% of the uprising’s activities in the first 18-months as unarmed.

Most surprising — and most ignored — is the fact that women made up the backbone of the uprising.

Having spent many years researching the First Intifada and subsequent struggles for dignity and equality in Israel and Palestine, I’m acutely aware of the danger that the dominant imagery of that time represents: it’s an incomplete picture that leaves out crucial details and context. If we don’t fill in the blanks, we will continue to reinforce an inaccurate narrative that makes peace with justice, equality, and dignity an even more remote possibility. So let’s correct the record.

Naila Ayesh, for example, was one of the founders of the Intifada’s unified leadership, drafting and distributing communiqués that outlined and implemented all manner of political activities, from strikes to boycotts to demonstrations. Another woman, Rabeha Diab, headed up Fatah (the largest Palestinian political faction) for over a year, making pivotal decisions that mobilized large cross-sections of the population. Zahira Kamal worked at the grassroots but spoke on the world stage to articulate a political vision, advocating for Palestinian self-determination. Their stories are chronicled in the latest film created by Just Vision, the organization for which I serve as Executive Director: “Naila and the Uprising”.

These women, and countless others, stepped into leadership positions when thousands of men were arrested, deported or killed during Israel’s repression of the uprising. Women organized economic cooperatives, mobile health clinics, underground schools, and more, sustaining and strengthening the insurrection.

Their prominence did not arrive out of the blue. In fact, Palestinian women had been organizing for decades.

“Publicly, the women’s committees were known for their social work,” explained Gazan activist Naima Al-Sheikh. “But in reality and covertly, it was all political organizing.”

When the uprising broke out, sewing groups organically became underground political committees, stitching the outlawed Palestinian flag. Women-led farming cooperatives grew victory gardens, planting vegetables and milking cows to enable the strategic boycott of Israeli goods. And when the Intifada’s sustained collective civil resistance forced Israel to the negotiating table in 1991 in Madrid, women such as Zahira Kamal, Hanan Ashrawi, and Suad Amiry played a central role in the Palestinian delegation, ensuring that their sacrifices were not in vain.

Women’s grassroots leadership during the First Intifada is remarkable enough, considering that it developed under a brutal military occupation and within a constricting patriarchal society. What is even more remarkable is that they utilized all the hallmarks of nonviolent civil resistance using the very same tactics we’ve seen from the U.S. civil rights movement, to South Africa’s anti-Apartheid movement, to India’s struggle for independence. The unified leadership of the uprising in which women were prominent was fiercely committed to a united, disciplined and strategic path to freedom.

But thirty years later, this entire narrative has been occluded. We’re still seeing the First Intifada through a “law-and order” framework, erasing nonviolent civil disobedience and the legitimate demands and concerns of Palestinian communities on the ground, as well as the crucial contributions of these female leaders. We recall Molotov cocktails, but not the victory gardens. We see burning tires, but not strikes and boycotts. We remember not the bold leadership of Naila, Zahira and Rabeha, but Arafat and Rabin’s handshake on the White House lawn.

That handshake represents what many women leaders of the First Intifada, among others, now consider a betrayal of their achievements. When the PLO conducted the back-channel negotiations with Israel that culminated in the Oslo Accords, they left women out of the negotiating process, and when the Palestinian Authority was established, women were largely excluded from the political transition.

That handshake was a wholesale erasure of their many accomplishments, not only at the negotiating table in Madrid, but also within the society that they had begun to revolutionize. The dozens of women activists we interviewed stressed that theirs had been a double struggle.

As Naila Ayesh said at the time, “Defending our rights means that we defend our right to continue participation in the struggle to end the occupation. It also means we defend equal rights and duties rather than exclusion and discrimination.”

The misleading narrative that erases the civil disobedience of women leaders is not simply incomplete; it is damaging, too, with high stakes ramifications. How we tell the story of the First Intifada, of unarmed organizing of communities on the ground today, and of countless other movements for freedom, dignity and equality the world over, has profound consequences.

For the actors – the thousands of Palestinians and Israelis engaging in nonviolent civil resistance – it could determine whether they can maintain and grow their efforts. Nonviolent resistance is incredibly difficult to sustain. Movement leaders depend on frequent victories to convince their constituents that civil disobedience – which comes at a high personal cost, often in the face of brutal repression – is a viable strategy. Victories come more often when international audiences, people like you and me, take note and offer our support.

Moreover, when women are erased from the narrative, it is that much easier to also erase them from political processes.

Women’s participation in resistance movements, in peace negotiations, and in leadership matters a great deal. According to research by the United Nations and the United States Institute for Peace among others, women’s participation impacts whether or not movements adopt nonviolent strategies. Their role helps determine whether movements are successful at achieving their goals. And women’s involvement in peace negotiations has been linked to the longevity of agreements reached.

Yet women are still largely erased from these processes. “We represent 50% and occasionally more in society,” Naima Al-Sheikh said. “So if 50% of the population isn’t participating in the decisions, it means it’s a society that is half-paralyzed.”

Equally important, at a time when Palestinians, Israelis and communities around the world are in dire need of inspiring role models and new paradigms, we risk losing the rich, timeless and powerful lessons that veteran activists like Naila, Rabeha, Naima and Zahira offer.

We may have missed the true story of the First Intifada in real time. But we can correct that narrative today, both by filling in the historical gaps and by refusing to let those gaps persist – whether in Jerusalem, Standing Rock, Ferguson, or beyond.

We must, each of us, look behind the headlines and toward the women organizers and activists in the movements struggling nonviolently for their rights. We must amplify their stories and their struggles in editorials and letters to the editor. And, when oppressing governments (or patriarchal forces within movements) delegitimize or silence women’s leadership, we must call them out in every public space available.

We must do this not only because we care about accuracy, but because when we amplify women’s roles in grassroots movements, we are supporting those movements’ ability to achieve their goals. We are helping the chances of peace agreements being reached, and of them lasting.

And in holding up women’s leadership in movement building, we’re holding up bold and powerful models for our ongoing struggles for freedom, dignity and equality — models that all of us need so deeply across the globe.

Suhad Babaa is a media strategist, a human rights advocate and the Executive Director of Just Vision.