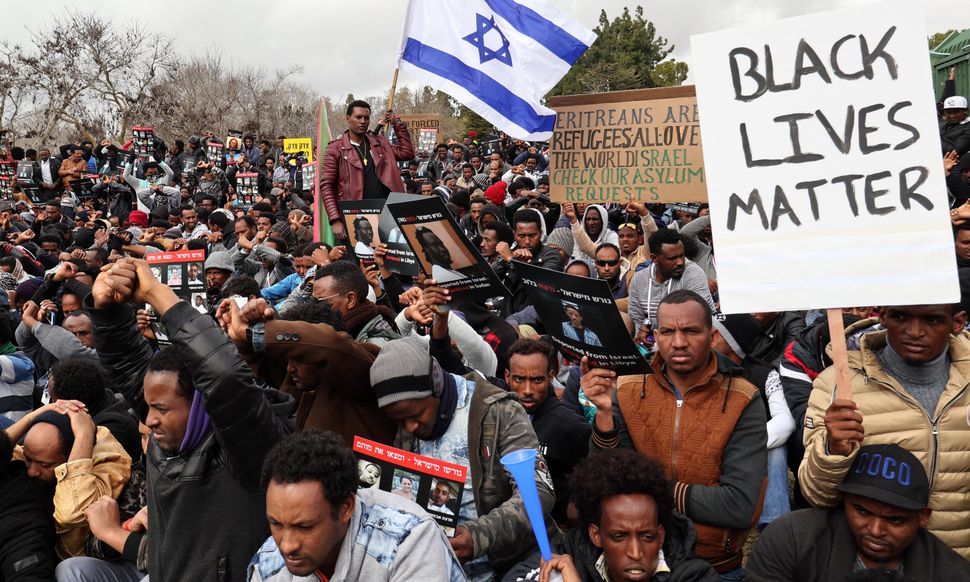 Whenever the kids on my block used to see a white person in our neighborhood on the South Side of Chicago, they would always yell out, “Tamar, someone’s looking for you!”

In a place where the only white people the kids saw were either teachers or police, it was strange to see random white people coming around just to hang out.

These days, though, no one looks twice anymore when the white moms and dads come down to eat dinner, play games, gossip and just hang out with us. I didn’t understand how much I valued all of my new friendships until yesterday, when I realized that I couldn’t count the number of my white friends anymore; there are simply too many of them.

Or there were, until I, a Black Jew, dared to criticize Israel.

In an op ed in these pages, I wrote about how Israel is not my Promised Land. From its treatment of Ethiopians to its treatment of African migrants to the treatment of the Hebrew Israelites, all the images of black people coming out of Israel horrify me. I wrote that I would not be visiting Israel anytime soon, despite childhood longings to do so.

It was their reaction that shocked me the most. These were the people who never hesitated to let me know that they had marched with Dr. King, voted twice for Obama and watched every episode of The Wire. It hurt me to know that they felt as if I needed their permission to feel what I was feeling. We could fight hate together, as long as we agree that Israel is off limits, especially to me.

It was startling. My opinions were so black that in the eyes of many they rendered me un-Jewish. How could that even be? And most importantly, why? When white Jews of different denominations disagree, or even criticize the Israeli government like I did, they’re called self hating Jews at worst. However, because of my opinion, my very identity as a Jew and its validity is now being questioned. It’s as though I can’t be a self hating Jew because I’m not a Jew at all anymore.

Instead of other Jews saying, “Let’s put our heads together and see how we can change the reality there,” there was a herculean effort to change me for pointing it out. I was the problem. Even though I wasn’t the one who made the decision to deport Africans. I wasn’t the one who called a Kenyan Jew a Goy. I was simply the one reacting to it.

All I said was that I’m not going to Israel, but many of my good Jewish friends said so much more about both me and them. They felt they had to protect Israel from me, much the way Israel is currently protecting itself from other opinionated Africans.

In response to my piece, many of my white Jewish friends started listing their black friends who really love Israel. I know that they meant well, that they were just trying to change my views on the treatment of Africans in Israel, but they actually managed to do just the opposite.

Perhaps if they had told me the stories of how much all of their friends, irrespective of their color, loved Israel, it would have made a difference. Why should I care more about the opinions of their other black friends with regards to Israel than I would about anyone else’s? Do all white Jews think the same way about Israel? Of course they don’t, and no one would even ask such a question.

Well, black Jews are no different. When white people tell me that they’d like to come to the block and see the work that my organization does there but they’re too scared because it’s in a “dangerous neighborhood,” I don’t tell them about all my white friends who have had wonderful experiences there; I tell them to develop an opinion based on facts rather than fears. This is exactly what I have done regarding Israel.

It’s unbelievably disappointing and saddening to see my white Jewish friends hold up their “other black friends” as examples of what good black folks could be. Of what I could be if I just gave Israel a chance. They presume those black people could completely ignore the treatment of other people who are just like them. To think that it doesn’t matter that they were “just” African refugees, and not Jews being deported and discriminated against. Yet no thinking person of African descent could ever be okay seeing these scenes; to me, they conjure up images of the Jim Crow south or of Apartheid-era South Africa.

I refuse to keep silent about the injustices that I see in the world, even when they are being committed by the government of Israel. For that I have been called everything but a child of G-d because I said I don’t want to go to a place where it’s clear to me I am not wanted.

Tamar Manasseh is the founder and president of Mothers Against Senseless Killings. Follow her on Twitter, @TamarManasseh