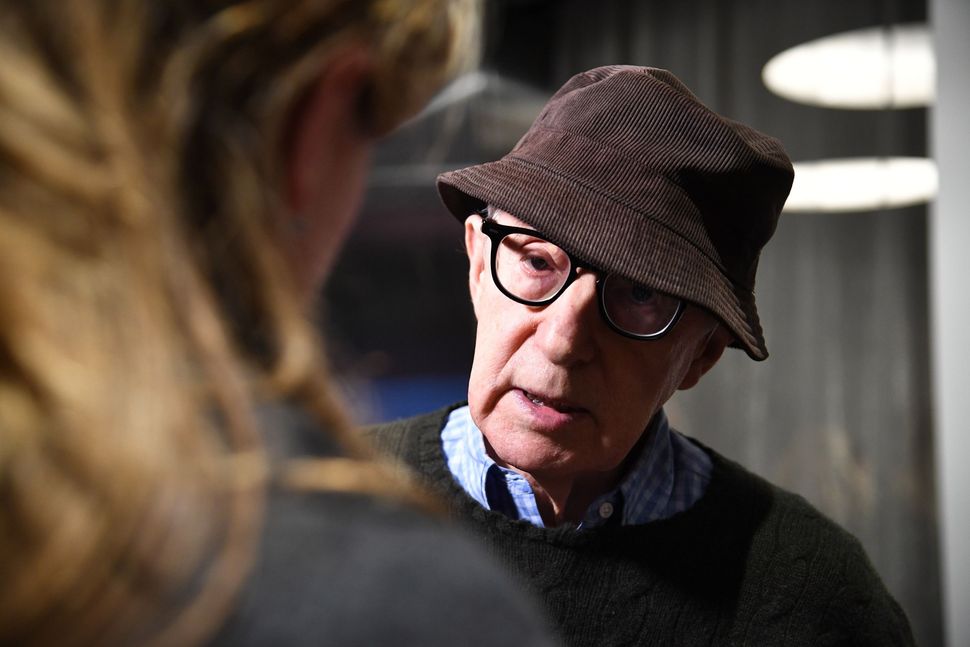 It seems the #MeToo wrecking ball is finally catching up with Woody Allen.

The 82-year-old actor and filmmaker has long been haunted by allegations that he molested his adopted daughter, Dylan Farrow, more than a quarter-century ago, when she was just seven years old. In 2014, Farrow wrote an open letter with the accusation, and yet the controversy quickly settled down, leaving Allen largely unscathed.

But now it’s 2018, and we live in a different world. Mira Sorvino, Greta Gerwig, Colin Firth and other actors who have worked with Allen have been lining up to repudiate him, especially after Farrow’s December op-ed chiding #MeToo supporters who let Allen off the hook. As attacks in the media multiply, Allen’s future in Hollywood—including the release of his almost-completed film, “A Rainy Day in New York”—is increasingly in doubt.

Some see see Allen’s public immolation as belated justice; in this version, the avenging angel is Allen’s estranged son, Ronan Farrow, the journalist who played a pivotal role in taking down Harvey Weinstein.

But from another point of view — the one that I think is correct — Allen’s predicament validates concerns about the #MeToo movement that Allen himself ironically expressed early in the Weinstein scandal: that the national reckoning on sexual abuse could easily become a witch-hunt.

For starters, I don’t think it’s wrong to be skeptical of Dylan Farrow’s allegations, especially given that they surfaced amidst Allen’s hellishly nasty breakup with Mia Farrow. While the notion that innocent men are routinely accused of child molestation by vengeful exes is a myth, it happens more often than Allen foes allow. Thus, in a 2003 Canadian sample, sexual abuse allegations linked to custody disputes were quite rare (just 69 cases out of more than 11,000 child abuse and neglect reports) but also quite unreliable: 18% of such allegations were classified as deliberately fabricated, 36% as unfounded albeit made in good faith. In a 2005 survey of (mostly female) American child welfare workers, four out of five said they had seen cases in which a child was coached to make false claims of sexual abuse, usually as part of a custody fight.

Obviously, none of this proves Allen is innocent. But it does leave plenty of room for doubt.

Much has been written on the 1992-93 Allen/Farrow saga, which began when Farrow discovered that Allen, her partner of 12 years, was sleeping with her 21-year-old adopted daughter Soon-Yi Previn (currently his wife). Dueling articles have marshaled the evidence for and against Allen.

On the anti-Allen side, there is the 1993 statement by Connecticut prosecutor Frank Maco that he had probable cause to charge Allen but chose to spare Dylan the trauma. (Later, an ethics panel harshly criticized Maco’s comments.) There is also the scathing decision in the Allen-Farrow custody case by Judge Elliott Wilk, who excoriated Allen for his conduct with Dylan and the other children. While he stopped short of saying that he believed Allen had molested his daughter, he stated that he saw no evidence Farrow had coached her.

On the pro-Allen side, there’s a report by a team from the Yale-New Haven Hospital Child Sex Abuse Clinic, brought in by the Connecticut State Police, which determined that Dylan had not been sexually abused and suggested there may have been coaching by Farrow. The New York State Department of Social Services also found no credible evidence of molestation.

Sorting through these materials is a daunting, depressing task. The weight of the Yale-New Haven report exonerating Allen is somewhat diminished by the fact that none of the notes or records from the six-month inquiry were preserved; there is only a two-page summary. Judge Wilk’s conclusions are skewed by barely concealed revulsion toward Allen. (While his distaste for Allen’s affair with his partner’s daughter was fully justified, his appraisal of Farrow’s conduct glossed over her physical assault on Soon-Yi and treated a horrifying Valentine card Mia gave Allen — of a group family photo pierced with skewers and a steak knife — as an understandable expression of anger.) It may also be worth noting that Wilk was married to an attorney who passionately advocates for abused women and children.

Other ambiguities abound, muddying the waters and making it harder to arrive at a definitive conclusion. For example, some time before the Soon Yi implosion, a Farrow family doctor had recommended counseling because of Allen’s “inappropriate” behavior toward Dylan. The main concern was Allen’s intense affection for Dylan to the exclusion of the other children. He was also criticized for taking Dylan into his bed, sometimes while wearing only undershorts, and for letting her suck on his thumb.

But is this incriminating behavior, or the innocent affections of a doting father? Is there gender bias in reading sexual overtones into something that, with the genders reversed, would likely be seen as maternal loving?

The only new evidence to have emerged since 1993 is two testimonies from two of Farrow’s and Allen’s now-grown adopted children — testimonies that contradict each other. On the one hand you have Dylan Farrow, who has publicly maintained that she was molested by Allen and clearly remembers the assault. On the other hand, you have Moses Farrow, who was adopted by Mia Farrow in 1980 and then by Allen in 1991. Initially hostile to Allen in the first years after Allen/Farrow split, Moses has since come forward to speak on Allen’s behalf. Now 39, Moses claims that Mia Farrow was physically abusive to him and her other adopted children and that she coerced and bribed Dylan into accusing Allen of the assault. He also disputes some of the specifics of his sister’s account, such as her description of a toy train set in the attic crawl space where the assault allegedly took place.

Here’s why I am strongly inclined to believe that Allen did not molest Dylan.

One, the alleged assault took place several months after the breakup, when Allen was visiting the children at Mia Farrow’s house in Connecticut. This would have been two days before he and Farrow were scheduled to sign a child support and custody agreement they had been negotiating. Most of the Farrow children, who were angry and resentful over the Soon-Yi affair, were in the house; so were two nannies. For Allen to choose that particular time and place to take Dylan to the attic and molest her would have been suicidally reckless.

Two, no other sex abuse allegations about Allen have ever surfaced; even Dylan confirms in her first television interview that she is alleging only a one-time sexual act. This seems unusual (one federal study of sex offenders found that those who targeted young girls in their family circle had committed an average of 81 assaults). And if Allen had sexually assaulted other underage girls, how likely is it that not one victim would have come forward by now — not four years ago when Dylan made her accusation, not in the past four months on the wave of the other #MeToo disclosures?

Given what we know, it seems more likely to me than not that Allen did not molest Dylan. And yet, in the eyes of the world, he is guilty.

That Allen is being branded a child molester based on such shaky evidence is troubling. It is perhaps equally troubling that the attacks on him often conflate child sexual abuse with other issues, from the morality of his relationship with Soon-Yi to general sexism.

Thus, Washington Post freelance writer Richard Morgan, who studied Allen’s personal archives, excoriates him for “repetitious misogyny” because of his frequent references, some clearly facetious, to older men attracted to beautiful young women. Along the way, Morgan misleadingly insinuates that Mariel Hemingway, who played the teenage girlfriend of Allen’s character in “Manhattan,” felt abused when filming a make-out scene with him (in fact, she talked about being nervous).

In a column for The Cut, New York magazine’s women’s blog, Mimi Kramer sees an underhanded misogynist attack in Allen’s humorously insulting tribute to Diane Keaton when he presented her with the American Film Institute life achievement award last June. (Never mind the misogyny of treating Keaton—who laughed heartily at the roast and still considers Allen a friend—as a doormat who defends her abuser.)

On the left-wing site Jewish Currents, writer David Klion asserts that Allen deserves professional destruction even if he did not molest Dylan Farrow. On his list of Allen’s hanging offenses: the relationship with Soon-Yi Previn and the pain it caused Mia Farrow and her other children; other relationships with young women (including supposed “implied dalliances” with minors); “refusal to seriously reckon with any of the allegations against him” (apparently even if those allegations are false); and “disturbing portrayals of younger women” in his movies.

There are, of course, plenty of reasons to criticize Allen. His relationship with his partner’s adult daughter — his children’s older sibling — was sordid, thoughtless and self-centered. But it does not make him a sexual predator, as is often claimed, and it certainly doesn’t point to pedophilic tendencies.

One can see the same streak of self-absorption in much of Allen’s work, though it goes hand in hand with self-mockery and self-deprecation. While some recent critiques reduce his films to an endless parade of lecherous men with beautiful nubile conquests, this is an absurd oversimplification; Allen’s alter-ego characters are at least as likely to experience sexual humiliation as sexual success, and most of his love interests are hardly nubile. (From 1982 to 1992, most of them were played by Farrow, then aged 37 to 47.) Even Klion praises the 1977 romantic comedy “Annie Hall,” co-starring Allen and Keaton, for its smart, interesting, three-dimensional heroine and complex, grown-up relationship, though he ultimately decides it’s all hopelessly tarnished by Allen’s alleged crimes against womanhood.

There’s a big difference between criticism and calls for ostracism. If every artist who has ever behaved selfishly and hurt others, or whose work can be branded “problematic,” is to be banished to pariah status, not many people will be left standing—male or female.

People have every right to be deeply troubled by Dylan Farrow’s account and to conclude for themselves that Allen is probably guilty. They can also sympathize with Dylan (and with Moses Farrow) but conclude that Allen, whatever his faults, did not sexually abuse anyone.

Yet in the current climate, denouncing Allen is less a moral choice than a result of intense social pressure, and those who defend him, from Keaton to Alec Baldwin, are themselves being attacked as thought criminals.

This is not justice; it is mob mentality. And it’s the future of the #MeToo movement if it doesn’t correct its course.