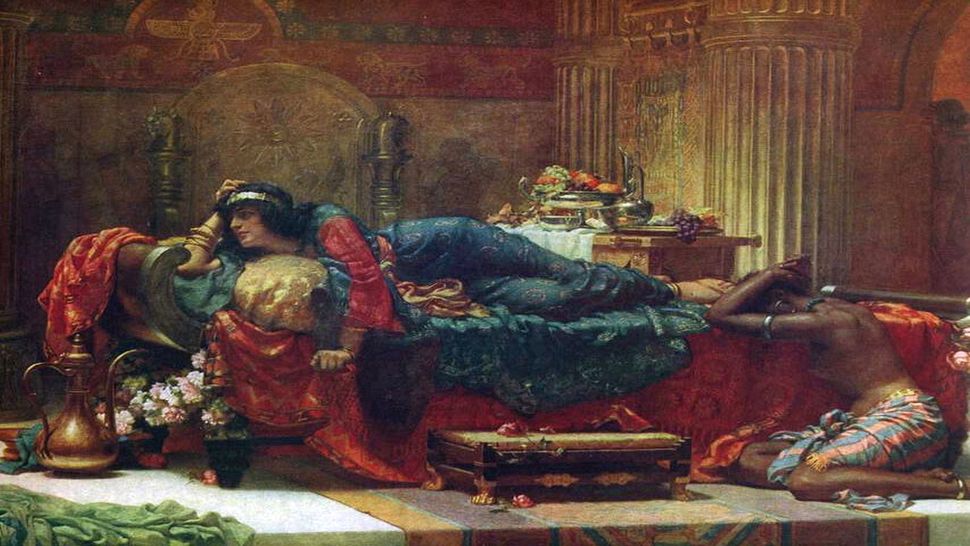 If Mordechai and Esther saw what 2018 had done to Purim, I like to think they’d be satisfied. The day is commemorated across Jewish denominations with celebration, exchanging of gifts, donations to the poor, and public Megillah readings—just as they requested. King Achashverosh, perhaps, would be less amused with how history remembered his reign.

But Vashti? She’d be dumbfounded. Because it’s not every day ostensibly progressive folk reclaim a vicious anti-Semite and serial abuser of women, crowning her a liberated icon.

The truth is that Queen Vashti was a sexual predator who used her position to abuse Jewish women. She’s no feminist.

And yet, you’ve probably heard the Vashti-feminist theory. It’s a tired trope that haunts the pews of liberal synagogues each Adar. In this rendition, Vashti was a queen who, even in the ancient world, had no qualms about putting her husband in his place. When the king asked her to dance naked at a party she defied him, knowing it could cost her both crown and head.

But that simple reading ignores an entire corpus of Jewish thought and, indeed, a rich oral history that describes the details of how our people suffered at Vashti’s hands. The Talmud tells us that Vashti was known for dancing naked at parties, and was notorious for sexual impropriety; her reticence to dance before the king was due not to virtue but to her humiliation at having developed a skin condition.

And Vashti was no champion of women’s rights. She would summon Jewish women, force them to undress, and demand they work for her on Shabbat. In other words, Queen Vashti used her unchecked power to sexually harass her female employees.

Sound familiar? If Vashti is a feminist icon, so are Harvey Weinstein, Bill Cosby, and Matt Lauer.

Now, you may wish to dismiss the Talmud’s account of Vashti’s crimes. But you should trust it. For starters, the Talmud’s account of Vashti’s sexual crimes reflects a Jewish consensus that remained unchallenged for two millennia. And you should trust it for the same reason you would trust any victim of sexual assault who points a finger at a powerful foe; indeed, this is the central lesson of #MeToo. It’s rotten form to reject a victim’s account out of hand, and something far worse than mere rotten form for the descendants of those victims to put that powerful foe on a pedestal.

The victims are telling us Vashti hurt them. Thus, calling her a feminist is insulting.

To really understand the insult, let’s take Al Franken as an example. Franken resigned from the Senate in early 2018. On paper, that’s the whole story. Now, we have a rich oral tradition regarding why he resigned: He abused his position of power to aggressively kiss and lewdly touch several women. And we culled this tradition, published in newspapers and online, from victims’ accounts. But there’s no telling whether, two millennia from now, revisionists will ignore media reports — our culture’s Talmud, if you will — and maintain that Franken never officially did anything wrong.

If that sounds unlikely, consider Vashti. Even after her victims came forward, and even after our scholarly “journalists” recorded those crimes in the Talmud, some consider her a hero. The Megillah itself, after all, merely mentions her resignation. Her victims are swept under the rug.

Sure, there’s still creeping doubt. Ask Vashti advocates about her questionable record, and they’ll respond that the authors of the Talmud slandered Vashti because they saw an assertive Gentile woman and elected to take her down a peg. But any serious student of the Talmud knows that its authors had no qualms defending biblical women and Gentiles on principle. Look at how the rabbis dealt with Potifar’s wife, another assertive Gentile woman in the bible. Potifar’s wife tried to force herself on Joseph and, when he refused, had him thrown in a dungeon. And yet the rabbis maintain that she “acted for the sake of heaven.” Or take Rahab, a Gentile prostitute who lived in Jericho during the first conquest of Israel. The Talmud writes that she repented and married Joshua, and that eight prophets are descended from her.

The Talmud calls Vashti a predator because she was one.

The valorization of Vashti is especially insulting because it’s not like the Jewish canon lacks worthy female icons for modern feminist audiences. There’s the warrior prophetess Devorah, spiritual leader of her generation. There’s Yael and Yehudit, two women who used their guile to slay Israel’s tormentors. Or the daughters of Tzelofchad, five women who challenged Moses himself, and won. Heck, there’s Queen Esther, another victim of sexual assault in the Purim story, but one who found the internal will to carry on and save the Jewish people. And unlike her predecessor Vashti, Esther not only defied her husband. She actively manipulated him into executing his prime minister, rescinding a royal decree, and allowing her coreligionists to wage war against the king’s very subjects.

It’s time to retire the Vashti-Feminist myth. She was a powerful executive who used her throne to discriminate against minorities and commit sexual assault with impunity.

If there’s one thing #MeToo taught us this Adar, it’s that we have a moral obligation to listen to victims. And when it comes to Purim, the victims have kept their story straight for two thousand years.

Joshua Krisch is the Chabad rabbi at Ithaca College in upstate New York. He is currently the staff science editor at Fatherly.