Leave Jeremy Corbyn Alone. He’s The Leader We Young Jews Have Waited For. 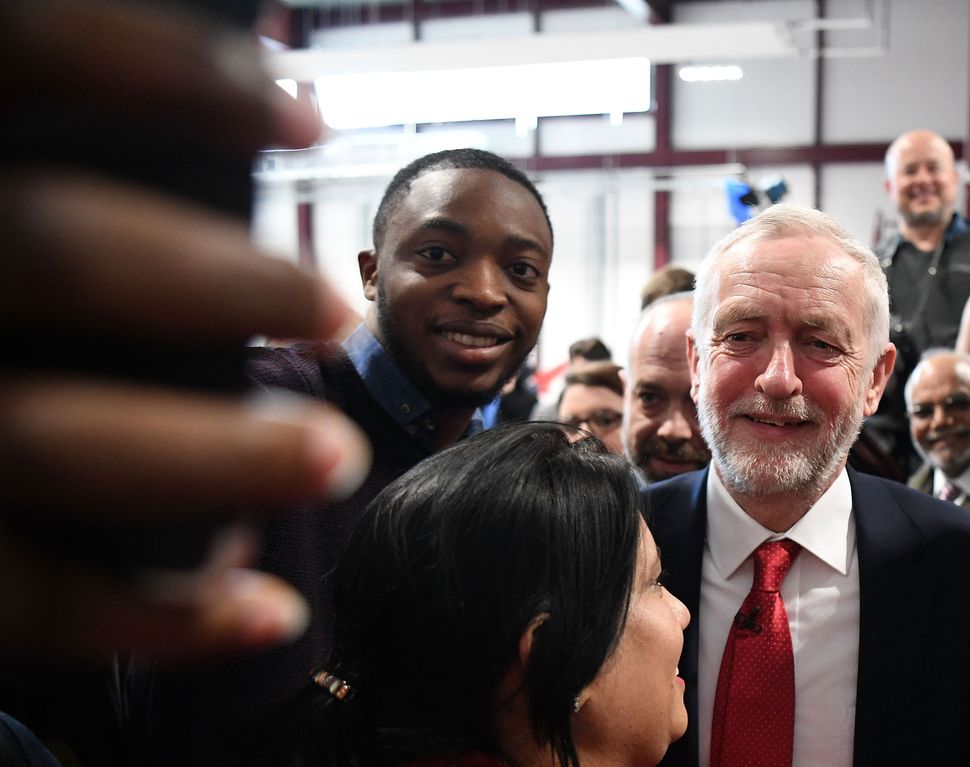 I first voted in a UK General Election in 2005, the year after I left school. I remember various adults telling me grand things about democracy and its history in this great liberal nation. I remember walking into my local voting station, feeling very grown up, putting my X on the ballot paper and checking several times that I’d done it right before putting it into one of the boxes. What I don’t remember is who I voted for.

Since then, I have become increasingly politically active. I’ve been on and even organised more demonstrations than I can count. I’m in a union. I’ve disrupted racist events. I’ve volunteered and organised fundraisers. I am deeply involved in left wing political groups.

But when it comes to exercising my democratic rights at the ballot box — feh. As a socialist, my instinct has always been to vote Labour. But under New Labour, I witnessed a financial crisis caused by the rich and that left the poorest to battle with years of austerity. I saw the government go to war with Iraq despite the millions who protested against it. And when I became seriously ill, I experienced first hand a healthcare system being privatised in all but name.

I don’t have much faith in our political system. And I am not alone. During every election in my memory, a running line of commentary has been that “young people don’t vote.” Whether out of apathy, or, like me, deciding to put their energy elsewhere, young voter turnout has been a recurrent issue here in the UK.

The General Election last year saw a surge in youth turnout the likes of which hadn’t been seen in a quarter of a century. The reason was an ageing, bearded activist who wears brown suits and grows his own vegetables.

Jeremy Corbyn has defied all predictions. And like Bernie Sanders in the U.S., he is particularly popular among Britain’s disenchanted youth.

Corbyn is the first political leader in our living memory who we’ve heard say anything real, with policies that go beyond buzzwords, that might actually change the future we are facing. Corbyn and Shadow Chancellor John McDonnell are the only MPs who have actually listened to my concerns, and responded to them. Last year, many of my friends who had never before shown any interest in electoral politics not only turned out and voted, but actually campaigned on the streets for the Labour party.

It may surprise you to learn that of those of us who voted Labour last year, many were Jewish. Many of us have met Corbyn through our own activism, and some of us, along with others in the Jewish community, have criticised him for some of his past associations.

But none of us have witnessed him saying or doing anything anti-Semitic.

And yet, I and the rest of Corbyn’s Jewish supporters have watched aghast as the first politician in our lifetimes who has actually promised us meaningful change has come under increasing attack from the supposed representatives of our community.

Of course, anti-Semitism on the Left is a problem. As a Jew who is very much on the Left, it is something I have experienced and battled against for years. In purely ideological terms, it is easy to say Anti-Zionism and anti-Semitism are not the same thing, but in practice they are not always so easy to separate. As this whole two-year Labour-party-anti-Semitism-meshugas has proven, inappropriate Holocaust analogies are still far too popular among some Labour supporters, and too often glossed over, particularly when Israel is their focus.

What upset me the most about former Labour MP Ken Livingstone’s now famous inability to stop talking about Hitler was not his comments themselves, but the number of people who indignantly defended him. There is a fine line between opposing the state of Israel, opposing Zionism, and starting to refer to both Israel and Zionism in terms reminiscent of old antisemitic tropes, portraying Israeli leaders with horns, or using the word ‘Zio,’ a racist term borrowed from neo-Nazis.

Even when this line is not crossed, there is often a general lack of understanding in the Palestine movement that Jewish support for Israel is not simply settler colonialism, that most Jews have far deeper connections to the country, and opposing its actions is not always easy.

At the same time, dealing with these issues must not, in my belief, detract from the important work of fighting for the freedom of Palestinians still living under horrendous conditions. In the UK too, while anti-Semitism may still be a serious problem, it is one we must keep in context as people of other minority ethnic groups still face violence and persecution on a scale that Jews have not known in this country for decades.

Corbyn’s critics, including much of the Jewish leadership in the UK are also guilty of misusing the Holocaust and our awful history for their own ends. Over the past two years, Corbyn and the Labour party have frequently been pushed to the centre of Jewish fears that the kind of hate we have experienced in the past might be rearing up again. To me, such comparisons and manipulations of Jewish history are just as disgusting when made by Jewish leadership as they are when made by Ken Livingstone.

The fears of course are valid, and genuine. There are far too many aspects of today’s world that smack of the 1930s and remind us that despite saying “Never Again,” the political system we live under is still the one in which fascists seized power and the Holocaust was allowed to happen. The festering presence of anti-Semitism in the political establishment is one of them.

But so, too, is the migrant crisis, the UK’s hostile environment, and the election of a US President with known far-right associations (who the British Board of Deputies hypocritically congratulated, as many have been quick to remind them).

In the context of Labour and the wider UK Left, where false accusations of anti-Semitism have frequently been used to shut down protest against Israel, the first and most important step is to get people to acknowledge that anti-Semitism is still a problem, and one that cannot be swept under the carpet by quoting your anti-racist record, or crew of Jewish friends. A full throttled and blatantly ideological attack on one particular party and one particular politician, manipulating every tiny bit of circumstantial and even Facebook evidence, is not the way to achieve this, particularly as Corbyn has acknowledged the need for action.

Yesterday, in an almost farcical display of Jewish politics, two Jewish demonstrations faced off outside Parliament, one protesting Corbyn under the slogan “Enough Is Enough,” the other defending him and feeling the slogan was a better fit for the Jewish Board of Deputies. Many of those standing by Corbyn were non- or anti-Zionists, and there was the usual name calling — “self hating Jews” and “kapos” from the other side.

If the Board of Deputies really wants to tackle anti-Semitism, it would do well to spend some time focusing on the conversations that need to be had in our own community, and working to include non-Zionist voices.

Jeremy Corbyn has apologised for the mistakes he has made previously and the hurt they have caused, and once again re-stated his commitment to tackle anti-Semitism. He has taken firm action against anti-Semitic incidents on numerous occasions. He has even, in a move that disappointed many of his supporters, including myself and other Jews, publicly spoken against BDS.

Difficult conversations need to be had, and at the moment, Jeremy Corbyn seems far more willing and capable of having those conversations than many of the organizations claiming to represent the Jewish community.

Leave Jeremy Corbyn Alone. He’s The Leader We Young Jews Have Waited For.