What If It Were Your Child Killed In Gaza? 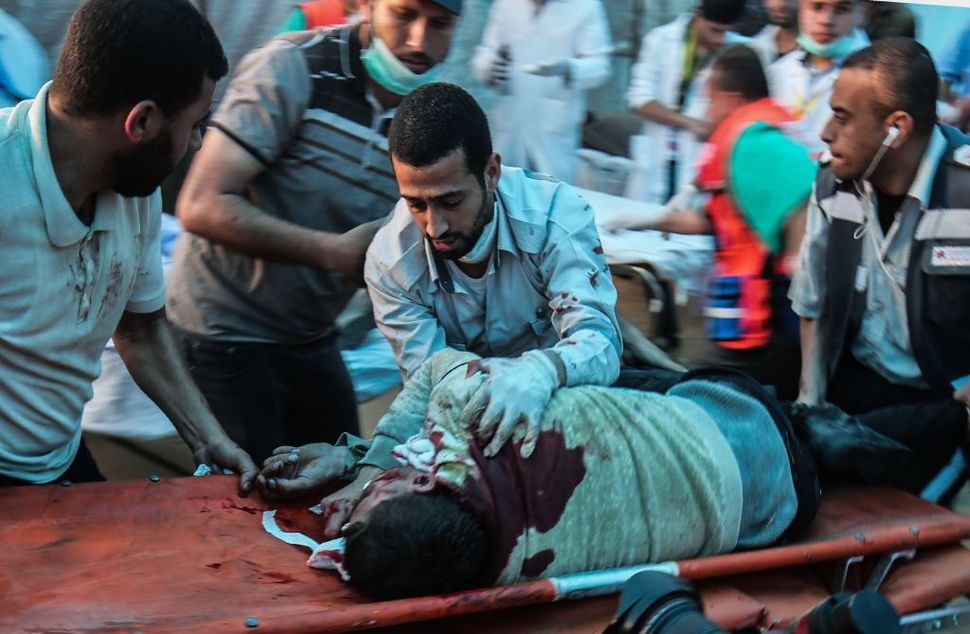 My mother started to scream on Friday, when she learned that my 18-year-old brother went to the Gaza border protests without telling her. She cried on and off all day long, in a state of hysterical panic until he returned back home safely late at night.

She asked him why he went even though she had begged him not to go.

“I’ll show up every day until I break free or die,” he told her. What was life anyway, behind the blockade?

My mother had tried everything to stop him from going, and she’d tried even harder to get him out of Gaza, to get an urgent eye operation he needs, and maybe even an education abroad.

But she had failed, and now he was even more determined to stand up against his slow death and walk towards extreme danger, unarmed and bare-chested. What does he have left to lose?

Today, only divine intervention shielded him from becoming the next “martyr,” or permanently losing his leg, shot by IDF snipers with internationally-prohibited butterfly live-bullets that rain down on civilian protestors.

He told me that contrary to what the army says, those who stand a meter closer to the fence, or hundreds of meters away, their chances at being shot are equal. People running away from the protest were shot, as were others who were praying. Some were on crutches or wheelchairs when they were killed. Even journalists in vivid-blue bulletproof press vests marked “PRESS” were targeted.

One of today’s victims was 15-year-old boy named Mohammed Ayoub. Shocking footage shows him running with other same-aged kids in a panic, and a second later, he was a cold corpse lying on dirt with a hole in his head.

What possibly could be the last thought passing through the sniper’s head before pulling the trigger? Was he joining his fellow soldier who recorded and cheered himself killing a motionless, unarmed Palestinian? Or was the IDF sniper merely following the advice of major general Oren Shachor, who said that “If we kill their families, that will frighten them.” Or was it merely that the solider knew there would be no consequences?

The Israeli government will probably conduct an internal investigation, which will conclude as did earlier investigations. “The boy was affiliated with Hamas!” we will learn. Or, as it was even better stated by Defense minister Avigdor Lieberman, “There are no innocents in Gaza.”

Hamas leader Yahia Sinwar was within the snipers’ sight as he stood only 300 meters away from the fence and shouted in a crowd “a revolution until we break free!” Why did the IDF soldiers avoid him and choose young Mohammed instead?

Any human watching will be devastated by the footage of the boy’s mother at the hospital. She dropped to her knees, weeping, as she hopelessly begged and cried before her dead child at the mortuary to wake up, “Please wake up… I wish I could have done something… forgive me son…”

She was quickly taken out of the room because there was no space left at the hospital. There wasn’t even enough time for goodbyes. The dead and wounded are crowding the corridors, brought into the hospital in dozens.

To the world, they are mere numbers. To their families, they are the center of the universe.

How will that mother sleep tonight without her son in his bed? How will she feel when her pain is dismissed by the cold statement that we Palestinians hear so constantly: “She probably have voted for Hamas 13 years ago?”

What will the IDF sniper tell his family back at home? How would I have reacted if it was my own brother? Would I have simply surrendered to the argument that he should have not protested against decades-long injustice, starvation and blockade? Wouldn’t I have burst in extraordinary anger and blinding rage and sought immediate revenge?

Dehumanization of the victims should be stopped! Israel and Palestinian blood are equally sacred. The killing of civilians on either side should be equally condemned and punished. Violence begets violence. The Palestinian commitment to peaceful protests on the borders to demand their basic rights should be endorsed, protected and even rewarded. So that the masses prevail over militants and show violence advocates that peaceful demonstrations are the ultimate tool of power against injustice and conflicts.

The Gaza protest is not opposing Israel’s existence, but rather, its illegal blockade that is killing any chance for reconstructing organized human life in the besieged enclave. Just past Wednesday, the EU passed a resolution unanimously that called for the immediate and unconditional removal of the blockade.

Young kids, women and teenagers are not invading another country by standing meters away from the fence, or by even breaching the fence, as long as their enclave, land, air and water is still occupied and controlled by Israel.

People like my own brother are trying to break out of an unspeakable slow death. They have had enough of watching their own kids being slowly poisoned by the water they drink, and by the soil in which they plant.

It’s time to set them free.

What If It Were Your Child Killed In Gaza?