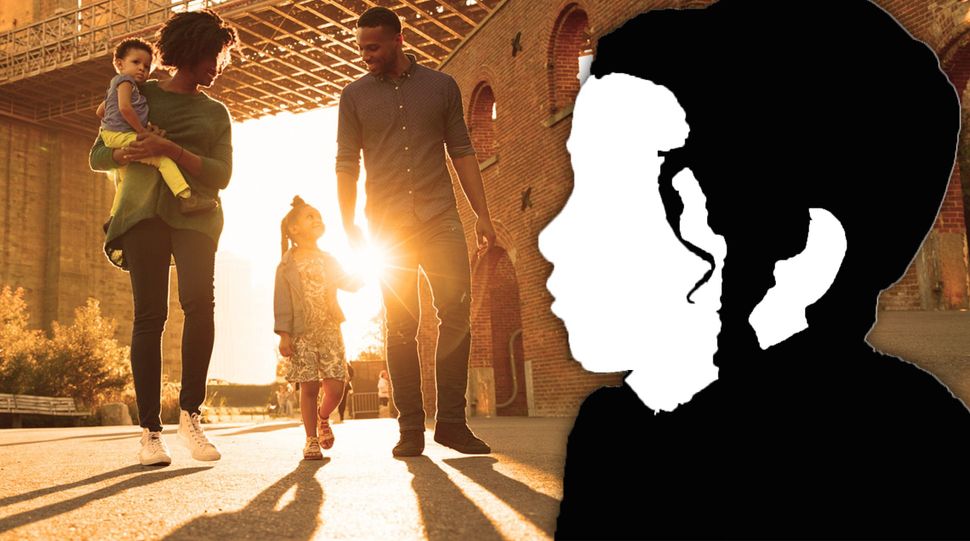 Raised in the Ultra-Orthodox Jewish community of Monsey, New York, I was trained to distrust anyone who wasn’t “chosen.” Even though I was a good boy, who studied lots of Torah and kept the Sabbath, I was frightened of anyone who didn’t have the same skin color, didn’t dress like me or didn’t believe in Judaism.

When my relatives visited, I questioned their lack of religiosity, and once went so far as to pull on my grandmother’s hair to see if she was wearing a wig as is required by Jewish law.

She wasn’t. I couldn’t understand how this person who didn’t adhere to Jewish practice could be related to me and also bring me gifts.

The racism in my community wasn’t exclusive to one particular group; however, the backward commentary tended to disparage African Americans. It unnerved me when while playing basketball my yeshiva classmates would intentionally throw the ball off an opponent’s leg or back and yell out “n***** play!” The message was that it was a sneaky and dishonest play to get a new possession.

I was always uncomfortable hearing that word, but I never spoke up because I was afraid of becoming an outcast.

My rabbis told me black people were vilda chaya — wild animals — because they played basketball bare-chested. My neighbors were scared of African Americans and in turn, that convinced me to be scared of them, too. They called the police if they saw a black person walking down the street. One of my neighbors’ mothers was so scared of African Americans that every time she saw one, she rushed her kids into the house. Her kids yelled, “The kidnappers are coming.”

On snow days, I would go to the local public high school with neighbors to sled down the massive hill behind the school. One winter evening, a few African American teenagers showed up and started walking toward us, and I got scared. My neighbors were scared, too. We ran as fast as possible until we reached a familiar house. As we sat in the snow on the edge of the lawn, catching our breaths, I wondered why I was so petrified. It’s not normal to be this scared of other people, I remember thinking.

Our neighbor Grace was the only black person who lived on our block. She lived alone in a room in a corner house owned by non-Jews. Whenever she walked by our house and saw me playing in the yard, she would smile widely and wave. It was the friendliest interaction I had as a child with the outside world. Grace reminded me of my grandmother: non-religious, loving and non-judgmental. Even at that early age, I felt guilty for thinking that because Grace’s skin was different than mine, it was impossible for her to be a well-meaning person.

The way in which I questioned my community’s racism encouraged me to doubt everything I was taught to believe. My rabbis told me I should never step foot in a public school because I would be killed. I believed them. To my rabbis and community, outsiders represented the depths of non-Jewishness they wanted me to avoid.

I ultimately left the fold when I was 16 and transferred to public school in my junior year.

On my first day of public school, I thought about what my rabbis told me. On the school bus, I believed the Muslim girl wearing a hijab would detonate a suicide bomb. Walking down the hallways, I believed I would be jumped. When Matt, an African American at my new school, offered his hand to introduce himself, I believed he would pull out a knife to stab me or a gun to shoot me.

But when he shook my hand it felt normal like every other handshake. I felt relief — I had been right to be skeptical — but also extreme guilt for having looked at the world up until that moment through such a biased lens.

On the way home from that first day of public school, I was disappointed in myself because I still felt scared of other people. But soon, disillusionment set in. The lies, fears, and paranoia began to unravel. I thought about Grace. I thought about my non-religious relatives. About Matt being kind and welcoming to me. I quickly understood that what my rabbis and community taught me about the “others” who weren’t Jewish was not only racist and wrong but lacked any compassion and acceptance that my new classmates and teachers showed me on my first day of school.

My bias didn’t change overnight. But making the transition to the secular world offered a crash course in acceptance and appreciation for other people. I retrained my mind to think more openly, be more understanding, and not jump to conclusions.

There was certainly prejudice against our community, too. We were different. We wore funny looking clothing, spoke differently, and didn’t use electricity on the weekends. I was hyperaware of the history of anti-Semitism and the Holocaust. Walking home from school one afternoon in fourth grade, a non-Jewish teenager riding a bike threw a small rock at my head and yelled, “stupid Jew.”

But I doubt the non-Jewish people in my community were taught at school to be afraid of us because we had different colored skin. I doubt they were trained to fear for their lives when around us.

When my public school classmates discovered that I was raised ultra-Orthodox, the questions piled on. Why are Jews so rich? Why do the Hasidim wear “zombie” clothing on the weekend? Do Jews really have sex through a hole in a sheet?

Fielding those stereotypes was certainly uncomfortable. But I understood why they were asking, and it offered me an opportunity I never had before: dialogue. I asked my classmates to forward me their burning questions and for my senior year speech class final assignment, I answered them. I had questions for them which they also answered.

I understood then that prejudice can oftentimes be a hidden curiosity. Perhaps if our communities weren’t so segregated those curiosities would be resolved organically.

It’s been 14 years since I made the transition to the secular world. I no longer think about other people in a paranoid, delusional and racist way. I’m dating a Muslim woman born and raised in Morocco.

Whenever racially charged news stories break, I cringe. They remind me of how fearful I was of other people growing up. It angers me that I was taught to stereotype and have anxiety around people that were different.

But I hope my reflections will encourage others to examine what they were trained to believe in as children. It’s clear from all the recent incidents that not enough people have.

Moshe Schulman is a New York based writer and recently completed a memoir about leaving the Ultra Orthodox Community of Monsey, New York.