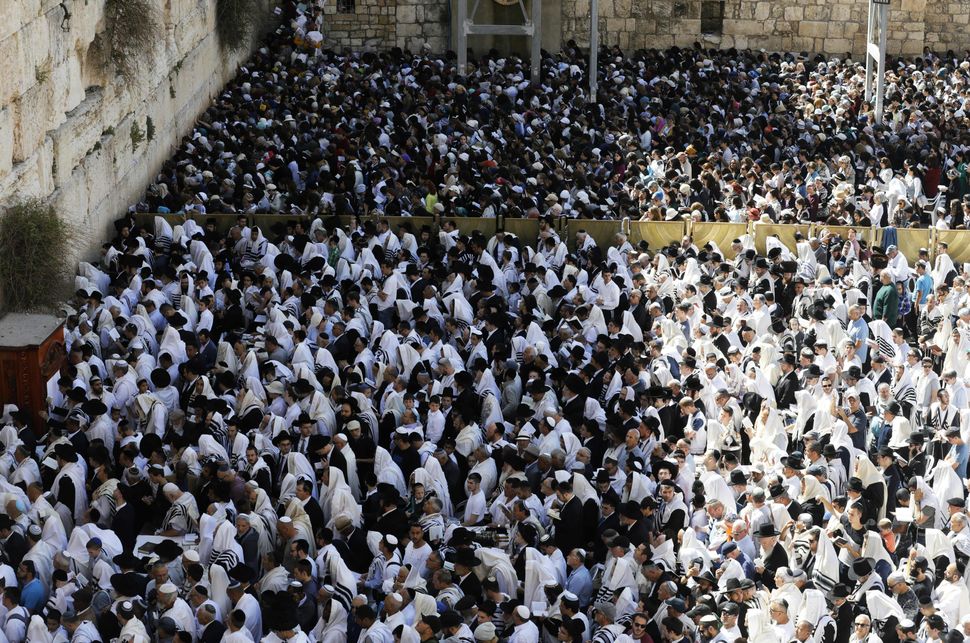 The following is a commencement address given at the Hebrew Union College.

I am grateful for your gracious invitation and am honored to be addressing you today.

With your permission, allow me to recall a day in early June of 1990 when I was similarly honored by the Hebrew University of Jerusalem. Yes, that was before most of you graduates were born! You, like the Hebrew University graduates, are entering your professions in a fractious Jewish world. Let me quote from my address from 28 years ago and compare the questions I asked then to the realities of today.

“We, the Jewish people have accomplished one of the great feats in history — from the utter destruction of the holocaust, we have risen to build a powerful and dynamic State of Israel and a vital and vibrant Diaspora Jewish community. We have gained levels of power, affluence and freedom unprecedented in Jewish history.

We have demonstrated for all the world that hope overcomes despair and life ultimately triumphs.

Having literally resurrected the Jewish people, we must now address the next great challenge before us, that is, to determine the content and the purpose of this great regeneration. Your careers will be filled with opportunities to determine a Jewish future, for which our past provides no roadmap.

What does it mean to have returned to history after 2,000 years? What is our mission as bearers of the covenant?

We have been mandated to determine our future. No longer will outsiders determine our fate. That is now the responsibility of every Jew wherever she or he may live, a challenge as great as any that we have faced.

The quotation continues, “I believe, with depth of heart, in the unity of the Jewish people, whose soul is in Jerusalem. I believe that if we, as a people, come to that same conclusion, we can achieve a greatness unthinkable until now. But I wonder, is that only a dream? Can it happen? Will it happen? If not, why not?”

Those of us who have worked intimately with Israeli and Diaspora Jews, must be aware that a rift has been developing, and, sad to say, increasing between us.

We need to reflect deeply upon our relationship and we need to ask questions; questions that are urgent and crying out for answers. Will Israel become less central to Diaspora Jews in the coming years? Will disassociation and alienation, perhaps even collision, characterize the relationship? Will Israel find the Diaspora a source of frustration and provocation? Will it view the concept of “we are one” as an empty vessel? Is it to be a relationship of mere sentiment or a covenantal relationship in which the partners are unconditionally committed to each other and to the Jewish dream of perfecting the world?”

Unfortunately, those questions are as valid today as they were on that beautiful June day in Jerusalem in 1990. Perhaps even more so, for the rift grows wider and wider.

Recent and continuing surveys have demonstrated that Diaspora commitment to Israel is generational. Perhaps, those of us who are older, forget that our children were not alive when Israel went through her birth pains, nor were they breathing during the awful darkness of the Holocaust. Thus, to them, to some of you, the miracles of rebirth of which we speak are stories told in history books, not the emotional experiences of witnesses. Perhaps we also forget that the newfound strength, power and freedom of Jews, certainly in North America, as well as in other parts of the Diaspora world, have their own euphoria and perhaps our children have yet to realize that without a strong, moral and vibrant Israel, the status of Jews in the Diaspora would be very far from what it is.

Our souls are still seared by what happens in Israel. But do Israelis care enough about what happens in the global Jewish World? Can a Prime Minister really claim to be a guardian of the entire Jewish People when he reneges on a carefully crafted agreement knowing that he will suffer no political consequences at home? Indeed, he can, because this subject and others like it are of little or no concern to the vast majority of Israelis.

Most of you spent a year of study in Israel. You must have been as perplexed and angry as I am at the official rejection of your religious tradition of Judaism. We have but one Jewish State. It shocks me to the marrow of my bones that Conservative, Reform, liberal and Reconstructionist Judaism are legally unrecognized by the State of Israel, that indeed only one expression of our religion is officially sanctioned from birth to death and all the intervening mitzvot.

Yes, other societies have, do and will discriminate against Jews, but it is only the State of Israel that bars official state recognition of what you, in this audience, so devoutly observe.

We all have friends in Israel who say, with a smile, “the synagogue I don’t go to is Orthodox!” That is not an accusation, it’s a fact. But it does reflect World Jewry in the eyes of Israelis, that same world Jewry that has built a network of academic Israel Studies programs.

How many Diaspora studies programs exist in Israel? How many journalists report on American Jewish life? What is taught in middle and high schools about our communities?

Israel comprises 43% of the Jewish people. Sadly, the remaining 57% is often taken for granted.

But this relationship is anything but a one way street. We must do our part just as Israelis must do theirs in order to rescue the Jewish people from breaking apart.

Together, both Israeli Jews and World Jewry, saying “I’m okay, you’re okay” will over the course of time cause a decline of the Jewish people everywhere. Let’s make no mistake: the powerful and vibrant diaspora and the powerful and dynamic State of Israel are inter-dependent. One cannot exist for long without the other.

In my view, what is needed is understanding, empathy, tolerance and the realization that we Jews are bound together by the Torah, and by our peoplehood.

Those qualities find expression in the amazingly successful Mifgash program of Birthright Israel. Yes, Birthright had to come into this talk somewhere!!!

The Mifgash program includes eight Israelis, usually from the IDF, on every Birthright bus filled with young adult diaspora Jews. The myths that one group has of the other are dispelled. The stereotypes disappear and deep lasting friendships are built within 5 – 10 days. Incredible, but true.

Indeed, the most profound reason I joined with my dear friend Michael Steinhardt in initiating Birthright Israel was my ever held belief in the necessity of Israeli and diaspora Jews to interconnect. Only in that way can the dreams of our forebears be realized. And then the full contribution of Jews to the betterment of society can be accomplished.

My own grandparents fled the pogroms of Russia and somehow or other through the intervention of the Jewish Colonization Association of Canada, reached the frozen provinces of Manitoba and Saskatchewan. What courage they had. What hardships they endured. I pay homage to them every day. Their dreams and those of your forebears, my dreams and I hope your dreams are all the same. We are closer than ever to seeing them realized.

You know, when Michael Steinhardt and I started Birthright Israel, we were constantly labelled as two stupid rich guys who were about to make fools of themselves!!! Yes, it was risky, but taking risks is part of leadership. Being considered foolish is often an encouragement to succeed. So take risks and succeed!

A significant part of your education was about our blessed leaders through the millennia. One of them being President Rivlin. He accurately talks about the four tribes of Israel. He went to Los Angeles last year and added a fifth tribe: that of Diaspora Jews. Those other four tribes play a day-to-day role in the political life of Israel. Shame on us for not being a constant and effective presence to ensure that “tribal” representation.

You also can be “blessed leaders.” Join me in realizing that action must be taken to prevent the breaking apart of the Jewish people.

How? Let’s establish a permanent, serious lobby in Jerusalem including both Israeli and North American Jewish groups. The time has come to demonstrate both the negatives as well as the positives that proposed Israeli legislation will have on North American Jewry. At the same time, we must heighten awareness of our vibrant communities, their importance to Israel and their real need to be recognized as full partners.

Two years after the establishment of the State of Israel, Prime Minister David Ben Gurion and Jacob Blaustein of the American Jewish Committee, published statements which defined the nature of the relationship between Israel and American Jewry.

It is time to revisit the Ben Gurion-Blaustein covenants and to build upon their sense of respect, mutuality and shared destiny.

I congratulate each one of you and am honoured to be with you. I believe in you and look forward to your leadership in fulfilling our dream and our global mission.

Charles Bronfman is the advisory council chair of the Israel Policy Forum, a nonpartisan American organization founded in 1993 that supports a viable two-state solution consistent with Israel’s security.