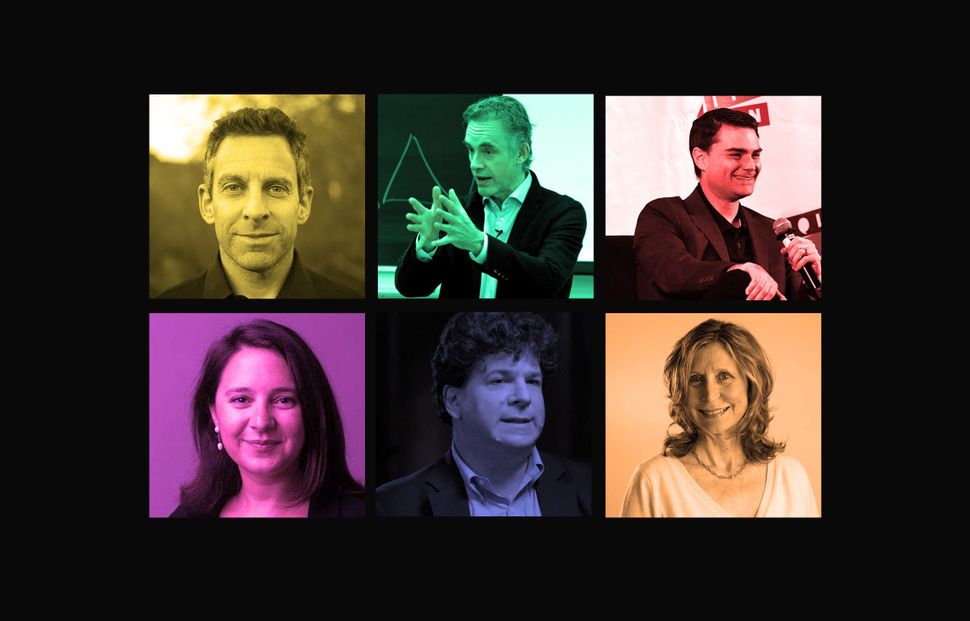 Reading the New York Times’ op-ed page, you’d be forgiven for thinking that the most dangerous threat to free speech is leftist totalitarians who criticize or protest against the right. Bret Stephens chastises leftists for criticizing right wing commentator Kevin Williamson; David Brooks bemoans leftist campus protests, and Bari Weiss often does the same. The Times seems obsessed with finding victims of so called silencing.

The latest foray into this redefinition of free speech can be found in Weiss’ most recent piece in the New York Times Magazine, about a self-styled group of pseudo-intellectuals dubbed the “Intellectual Dark Web.”

The I.D.W., as it is referred to throughout the piece, is a loose affiliation of very successful left-hating pundits who strenuously claim to be oppressed. Among those Weiss cites as members are the conservative writer and speaker Ben Shapiro, whose podcast gets 15 million downloads a month; the Canadian psychologist Jordan Peterson, whose self-help book is a bestseller and whose youtube videos get millions of views; New Atheist Sam Harris, who also has a very successful podcast; and critic of feminism, Christina Hoff Sommers, who has a sinecure at AEI.

These are people with large platforms, successful careers, and scads of cash. They are also people who, Weiss claims, are frequently and harshly criticized. For expressing beliefs such as “the existence of fundamental biological differences between men and women” or believing that “identity politics is a toxic ideology that is tearing American society apart,” these authors “have met with outrage and derision — even, or perhaps especially, from people who pride themselves on openness.”

Weiss presents the criticism of this counter-cultural vanguard as unfair, stifling, and obviously hysterical.

And yet, there’s an internal paradox in her criticism. Surely if you believe in free speech, then you should believe in the right of people to freely deride viewpoints they disagree with and find harmful, even when the derision is misguided.

Moreover, the derision in this instance is not wrong.

Weiss carefully and deliberately downplays and obfuscates the beliefs of the thinkers she discusses.

For instance, she says Peterson, who spoke out against a Canadian bill which sought to outlaw discrimination based on gender identity, “resisted on the grounds that the bill risked curtailing free speech by compelling people to use alternative gender pronouns.” But she fails to acknowledge that he has systematically misrepresented the legislation in question, which doesn’t even mention pronouns, and only includes punishments for words which are an immediate incitement to violence.

Peterson may be deliberately lying about the bill, or he may just be deeply confused; in either case, criticism of him is hardly a violation of his rights, but is an absolute necessity. That’s the case with many of Peterson’s other statements, too; thus, in an interview with the Epoch Times, Peterson called for Canadian educators teaching leftist ideas and egalitarian ideals to be tried for treason — a position that seems to require some pushback.

Weiss also doesn’t mention that Ben Shapiro has claimed that LGBT people face virtually no discrimination; neither does she acknowledge his openly racist declaration that “Arabs like to bomb crap and live in open sewage.”

Perhaps most glaringly, when Weiss brings up another counter-cultural rabble-rouser, Kanye West, she mentions his praise for Trump supporter Candace Owens. “Mr. West’s praise for her was sandwiched inside a longer thread that referenced many of the markers of the Intellectual Dark Web, like the tyranny of thought policing and the importance of independent thinking,” writes Weiss.

That same day, Kanye told TMZ that slavery was a choice made by Africans – a heinous claim, which Weiss does not mention.

If Weiss truly believed that these folks were the purveyors of edgy, cool, courageous stances, as opposed to problematic ones that the Left is right to revile, surely she would have been honest enough to quote their most problematic opinions. Instead, she quotes only the milquetoast ones, portraying these people as edgy yet acceptable counter-cultural thinkers who the Left can’t tolerate because it cannot tolerate any dissent.

But the truth is, people don’t criticize the intellectual dark web because they hate free speech; they criticize the IDW because they believe these ideas are hateful — and dangerous. It’s dangerous to deny the Holocaust, or to give a platform to those who would. It’s dangerous to suggest that Blacks are intellectually inferior, as Sam Harris did when he discussed the issue with Charles Murray.

But because Weiss paints any criticism as unfair and oppressive, she is left somewhat at a loss when she turns to the parts of the IDW she doesn’t like. Weiss admits the group she’s championing has some uncomfortable connections. Members of the intellectual dark web have interviewed conspiracy theorist Alex Jones and cartoonish alt right apologist Mike Cernovich. As Weiss rightly points out, “if you are willing to sit across from an Alex Jones or Mike Cernovich and take him seriously, there’s a high probably that you’re either cynical or stupid.”

And yet, Hoff Sommers herself sat across from someone just like that.

In fact, rather than distinguish between the I.D.W. and the hate-mongerers, Weiss’s piece exposes the slippage between them, a slippage best illustrated by our Commander in Chief, Donald Trump.

For the most obvious and unsettling member of the “intellectual dark web” is surely out president, though nowhere does Weiss acknowledge this. Trump’s brand is exactly the same as the brand that Weiss describes for the intellectual dark web. He presents himself as a brave truth-teller defying the left by stating uncomfortable truths—uncomfortable truths that turn out to be the same old prejudices and bigotry as ever.

Trump brands himself as a brave truthteller while going after “identity politics.” Like Jordan Peterson, he pushes for anti-trans legislation. Like Ben Shapiro, he targets Muslim people. Like Charles Murray he believes in the inferiority of black people. Like Hoff Sommers, he associates with Holocaust deniers.

As Trump illustrates, the real uncomfortable truth is that prejudice and bigotry remain not only popular but powerful. Marginalized people do not have the ability to silence those who demonize them. If they did, Trump would not be in the White House.

The right, though, has undertaken a conscious program of presenting themselves as oppressed and daring. Sam Harris says that the totalitarian left won’t let him talk about black people’s IQ. Not that dissimilarly, the alt right says that the totalitarian left won’t let them speak freely about the need for ethnic cleansing. That intellectual dark web stretches out farther than Bari Weiss would like it to.

Harris and Peterson and Shapiro et al have money and an audience. They have a fun narrative, in which they are fighting the forces of oppression, one daring idea at a time. But, as you’d think Trump would have demonstrated, saying hurtful things doesn’t necessarily make you a champion of liberty.

This article has been updated to include Hoff Sommers’ claim that she did not know that the podcast was associated with Holocaust denial.

Noah Berlatsky is the author of the book “Chattering Class War: Punching Pundits from Chait to Chapo and Brooks to Breitbart”.