Roseanne Came For Me About Israel. She Was Racist Then, Too 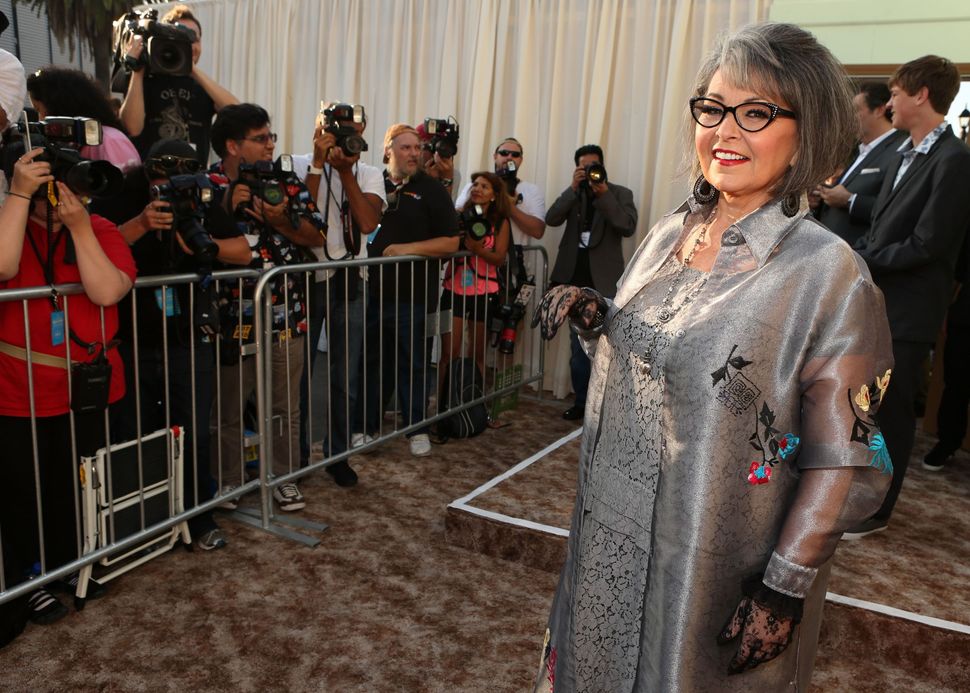 For much of this week, the actress and rabid Israel-supporter Roseanne Barr has dominated headlines. After making a hugely successful comeback this year with the return of her show “Roseanne” after a decades-long hiatus, ABC cancelled the show and fired Barr after she posted a racist tweet comparing former Barack Obama aide Valerie Jarrett to a monkey.

Barr did later apologize, and announced that she would be leaving Twitter.

I apologize to Valerie Jarrett and to all Americans. I am truly sorry for making a bad joke about her politics and her looks. I should have known better. Forgive me-my joke was in bad taste.

But on Tuesday night, she was back at it. Following her show’s swift cancellation by ABC, Roseanne retweeted defenders of her tweet about Jarrett, claimed ignorance of Jarrett’s race, and finally blamed the whole thing on Ambien.

i honestly thought she was Jewish and Persian-ignorant of me for sure, but…i did.

And in between justifying her racist comment, she retweeted statements in defense of Israeli actions in Gaza.

It’s no accident, either. Let’s be honest – Roseanne’s racism clearly extends to her view of Jews, and of Israel.

For starters, as part of her plea of ignorance over Jarrett’s race, Roseanne claimed to have thought Jarrett was “Jewish and Persian.” Apparently, likening Mizrahi Jews to Planet of the Apes is an acceptable form of racism to Barr. And on the same night as her tweets about Jarrett, she tweeted an anti-Semitic canard about George Soros, calling him a Nazi collaborator (he was not). Then there was the time she posed for a magazine cover photo, dressed up as Hitler burning cookies in an oven.

Sorry to have tweeted incorrect info about you!I Please forgive me! By the way, George Soros is a nazi who turned in his fellow Jews 2 be murdered in German concentration camps & stole their wealth-were you aware of that? But, we all make mistakes, right Chelsea?

That now-infamous photo shoot occurred before her well-publicized about-face on Israel, which she once labeled a “Nazi state”. As I learned when Barr blocked me a few years ago, she now deploys Nazi-themed attacks – with the zeal of the converted – toward critics of Israel.

In 2015, I and the organization I work for, Americans for Peace Now, were one of Roseanne’s many Twitter targets. In response to a tweet supporting a fellow Jewish organization’s campaign to pressure the Jewish National Fund on funding of Israeli settlements, she responded in nonsensical but now-typical Roseanne fashion: 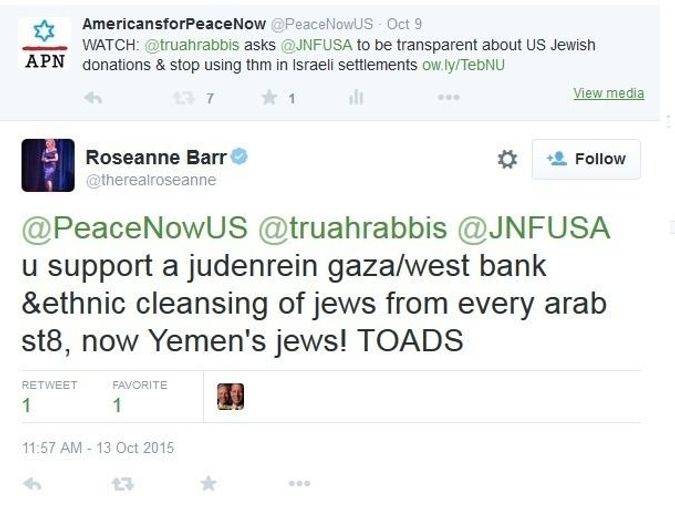 She accused us of supporting “a judenrein gaza/west bank &ethnic cleansing of Jews” (sic) and followed up with “TOADS”.

We then had a brief exchange in which I offered some remedies for her allergy to facts. She called me a “racist” and my organization “uncle toms.” But before we could explore the nuances of UN resolution 242 and the Gush Emunim movement, Roseanne blocked me, and like her show, our back-and-forth was abruptly cancelled. 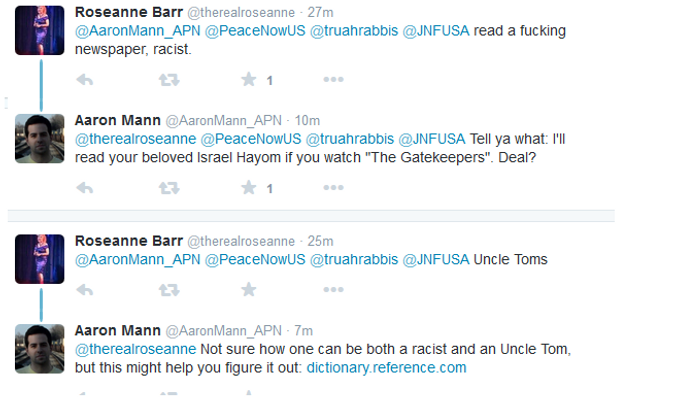 Of course, Barr and her kind are not interested in a nuanced or factual debate about anything. Her words mirrored common rhetoric from right-wing settlers and their supporters. “Judenrein,” the Nazi term for ethnic cleansing of Jews, makes for a convenient, incendiary re-framing of settlement evacuation as an act of hostility against Jews. The idea that such evacuations would be part of a mutually-agreed upon peace deal that would secure Israel as a Jewish and democratic state, thus fulfilling the Zionist dream, is lost on purposefully deaf ears.

In some ways, that’s understandable. Defending the Israeli settlement enterprise and the 50-year occupation it entrenches often requires one to be willfully ignorant of the facts.

But she knows the word “judenrein” and what it entails. And when your sole mission is to smear, a full understanding of the facts can be as much the enemy as your intended target.

Much like her conspiracy theories about Valerie Jarrett, George Soros, and Chelsea Clinton, Roseanne’s use of terminology employed by the extremist fringe of the Israeli settlement movement shows how far these ideas can travel in the age of social media. This terminology, like disparaging Jews who seek a viable two-state solution as advocators of “Judenrein” Israel, or calling us Uncle Toms, is racist. It advocates for Jewish supremacy and brands anyone who disagrees a traitor. And no matter how often the claims been debunked, they never seem to die.

Thousands of studies over several decades have shown how, in general, people fail to alter their beliefs even after they’re completely refuted. Meanwhile, more recent research on “the illusion of explanatory depth” suggests that people tend to think they know more about any given subject than they really do. And people resist delving deeper so as not to risk dilution of their passionate positions.

It should be of no surprise to anyone that this phenomenon is growing more common in both the U.S. and Israel. As Jarrett commented in her response to the Roseanne controversy, “the tone starts at the top.” President Trump’s playbook of daily assault on the truth has been readily adopted by Israeli Prime Minister Benjamin Netanyahu, a fellow practitioner of the dark art of complaining about “fake news” while spreading (actual) fake news.

When our human tendency to dig in our heels is combined with limitless internet-supplied content that can support any argument – no matter its veracity – and two national leaders who employ falsehoods instinctually, strategically, and continuously, the whole notion of objective truth is eroded.

There will always be another Roseanne – an extremist armed with extreme rhetoric and a shield of self-enforced ignorance – and there may be nothing others can do to change such people. But we would all do well to re-examine and challenge our own biases and deeply-held beliefs. Widespread self-reflection from adherents of all political ideologies may produce the kind of counter-reaction to our current reality of gaslighting and “alternative facts” – and one that may prevent another Trump or Netanyahu.

Aaron Mann is the Associate Director of Communications and Public Engagement at Americans for Peace Now.

Roseanne Came For Me About Israel. She Was Racist Then, Too