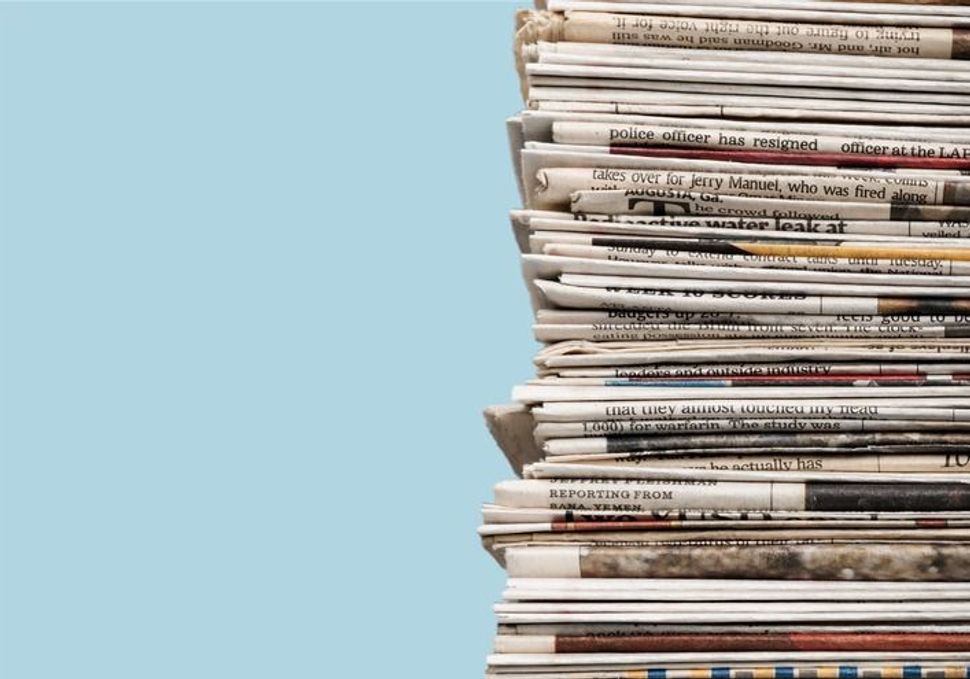 Even several decades ago, it became clear to a lot of very smart people that traditional journalism was in trouble. Newspaper circulation was shrinking. Trust in media was endangered. Long before the complete meltdown in advertising, the competition online, the advent of “fake news,” there was a sense that journalism was disconnecting from its essential role in maintaining democracy.

Jay Rosen, the New York University professor who remains one of the most intriguing public intellectuals in this arena, synthesized the challenge thusly: “What does it take to make democracy work and what should be asked of the press?”

American journalists continue to try to answer that question, as you can see now with the spate of self-criticism over the media’s behavior during the 2016 presidential election and the calls to focus more constructively in 2020. But I was fascinated to learn about a nascent, very promising movement in Israel to answer the challenge in a uniquely Israeli way.

Yair Tarchitsky, one of two co-founders of The Movement for Public Journalism, is both a journalist and a union organizer, and as we spoke in his spare Tel Aviv office at the end of December, I could sense both sets of skills at work. Tarchitsky’s day job is the chair of the Union of Journalists in Israel, which he began in 2012 and has grown to represent nearly 4,000 members in matters of labor rights and freedom of the press — made ever more difficult given the assault on such freedoms by the Netanyahu government.

Journalists are now among the most unionized sectors in the Israeli economy, and Tarchitsky’s success emboldened him to take on an even more ambitious challenge: revitalize Israeli journalism, which is suffering the same public disconnect as we experience in America. “We need a new model,” he told me. “So we are creating a social movement whose only goal is to serve the public through journalism.”

He and co-founder Yoav Ribak, head of the news department at Yediot Aharanot, registered their new organization as a non-partisan not-for-profit and are developing a membership model in which ordinary citizens will fund the work and, just as intriguingly, contribute to it.

“You don’t have to be a journalist to do journalism,” he said. So one of the Movement’s innovations is to enlist citizens to help report investigative stories, which they have already begun in a couple of pilot programs. To ascertain how long patients have to wait for specialists in Israel’s vaunted health care system, for instance, citizens made 600 phone calls in eight different cities; the results, subject to verification and presented in context, were published in The Marker.

Tarchitsky and Ribak have also created HAITON (“The Newspaper” in Hebrew), a free weekly newsletter that curates the best in Israeli journalism about social issues. And they are launching projects to bolster local journalism, enlisting the public’s help in investigating local problems. The goal is not simply to find and report eye-catching stories, but to strengthen a community’s capacity to address its own concerns.

“We have to change the relationship,” Tarchitsky said, “to make people feel like journalism is here to serve them.”

Every culture has its own journalistic eco-system, and Tarchitsky recognizes that his organization must fit Israel’s needs, and not a pre-determined American model. But, as our journalism struggles to be independent, trusted, relevant and sustainable, I am just as certain that we can learn from this example, too.

What else I’m writing. I’m still working through all the stories I reported on during a week in Israel. My conversation with Israeli President Reuven Rivlin, published online yesterday, helped me understand why he seems to be so popular at home, and in the Diaspora.

A longer essay about the rise of Israeli women political leaders is scheduled to appear in a special Sisterhood newsletter tomorrow afternoon. Look for one more story in the coming weeks.

What else I’ve been reading. Last week’s newsletter, in which I opened with my thoughts on banishing the phrase “self-hating Jew,” generated lots of reaction, most of it affirming, with a couple of nasty emails that simply confirmed my point! Here is one of my favorite responses:

“We have the obligation to question what is going on in our lives even if the questions we raise make others uncomfortable, afraid or angry. I see you and the writers for The Forward, and hopefully myself, as self-loving Jews because, by questioning, not for its own sake but because our questions are real and the answers we find may result in ‘inconvenient truths’ and these then open the door for living more consistently with values of justice and love.”

The email, sent to [email protected], was signed David Cohen. I know a lot of David Cohens, and want to thank them all for sending this.

Looking forward. Later this week, I’ll spend a day (or two) at Columbia University with scores of other journalists pouring over the best magazines our profession offers. It’s part of the judging for the “Ellies,” the annual awards bestowed by the American Society of Magazine Editors — a grueling process that, if the past is any guide, ends up being genuinely inspiring.

This column is part of the weekly Jane Looking Forward series. If you would like to receive it in your inbox, to sign-up. And, remember to email me at [email protected] with your questions and concerns. Thank you!