Synagogue Shootings Shattered Our Illusion. America Is No Safe Haven For Jews. 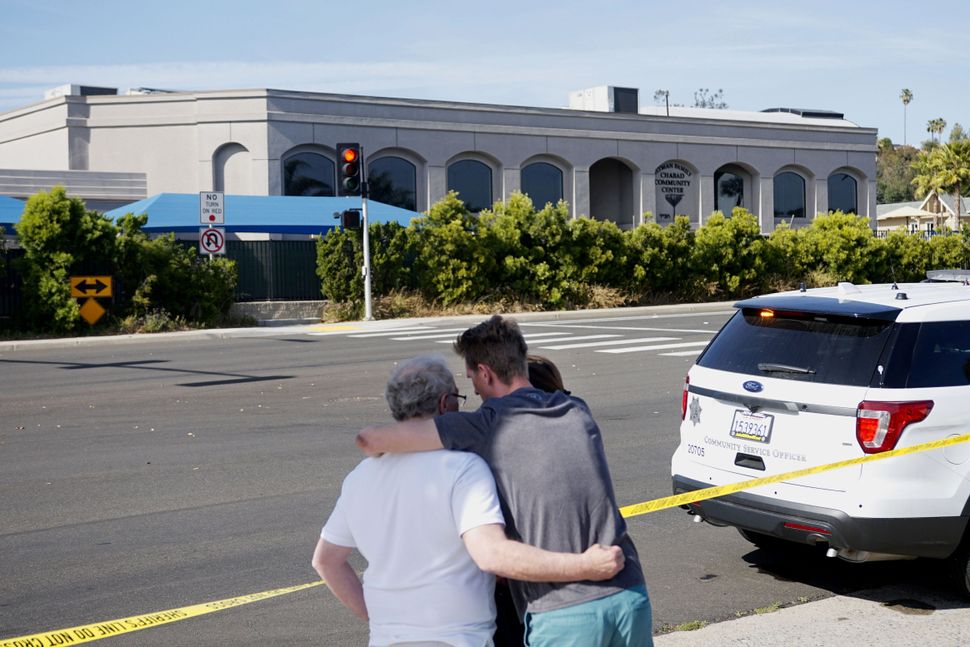 On Saturday, April 27, a few hours before the shooting at the Chabad in Poway, California, I walked from my hotel in Amsterdam—where my family has been on vacation—to a synagogue I found online. I arrived at a building with no external Jewish markings. The door was locked. When I tried to open it, a man with a walkie-talkie showed up and explained that he was from the community security service.

He asked me where I was going. I said I was going to shul. He asked me if I knew what day it was on the Jewish calendar. I said it was Shabbat and the last day of Passover. He asked me to describe a Shabbat service and the rituals Jews perform on Passover. Then he said, “Complete this sentence: Shema Yisrael….”

Finally convinced that I was indeed a would-be shul-goer, not a would-be terrorist, he explained, “It’s different here than in the US. There’s a lot of anti-Semitism.”

He mentioned that he had recently visited New York. I asked where he had davened there. He replied: Chabad.

I’ve gone to shul many times in Europe, usually to unmarked, locked, guarded buildings. And it has long reinforced my American chauvinism.

Europe’s synagogues remind me of Europe’s Jews: every bit as Jewish as their American brethren in private, but publicly more cagey and discreet.

During my time as a graduate student in Britain, a dispute broke out over the construction of an eruv—an enclosure created so observant Jews can carry on Shabbat—in part of London. Many of the fiercest opponents were British Jews themselves. They feared the eruv would mark their neighborhood as different, and thus bring unwelcome attention from the public at large.

Had you asked me back then why American and European Jews were different, I would have replied that it was because America and Europe were different. The United States, while deeply racist against blacks—long the quintessential American “other”—was far more welcoming of immigrants.

Even American conservatism, I told my European friends at the time, was surprisingly inclusive. Look at George W. Bush and his political advisor, Karl Rove, who were welcoming Jews, Muslims, Asians and Latinos into the Republican Party in a bid to create an ecumenical conservative coalition that could triumph in an increasingly racially and religiously diverse America.

In retrospect, my analysis was self-satisfied and naïve. The Chassidic tradition teaches that just as Jews should clean their homes of chametz (leavened material) in preparation for Passover, we should also cleanse ourselves of our inflated sense of self, and become modest and humble like matzah.

And humility requires admitting that I was wrong.

The Trump era has shown that nativism, anti-Semitism and Islamophobia are more deeply rooted in American politics and culture than I realized.

When Donald Trump proposed banning Muslims from entering the United States in December 2015, most Republican voters said they agreed. When he claimed a Mexican-American judge should be disqualified from hearing a lawsuit because of the judge’s ethnicity—a remark that even Paul Ryan called “textbook” racism—Trump lost no public support. When he ran an ad in the campaign’s final days featuring three prominent Jews alongside language about “global special interests” and a “global power structure,” he continued surging in the polls.

America is not as different from Europe as I once believed. As a result of the Pittsburgh shooting, I now pass guards when I enter my synagogue in New York. My children encounter several as they walk into their Jewish school. Reports of anti-Semitic graffiti and attacks have become commonplace.

As a prosperous and mostly white population, American Jews remain far safer than Muslims and Latinos. Still, the shooting at Chabad of Poway is one more sign that Jewish life in America is less exceptional than I once believed.

What scares me is less the possibility that my family or I will be injured than that anti-Semitism will erode the public, self-assured—even brash—culture of American Jewish life. How long before the guards in front of our synagogues becomes guarded behavior on the street and at work?

Walking through Amsterdam on my way to shul, I wondered whether by wearing a kippah I was putting my safety at risk. I never think that way in America.

In college in the United States I never worried about telling professors I would miss class for Jewish holidays, something I hesitated doing in graduate school in England. Until recently it would have struck me as inconceivable that my children would not enjoy the same level of cultural self-confidence. Now I’m a little less sure.

When I finally entered the shul in Amsterdam, the congregants greeted me warmly. I was the tenth man, which provided them a minyan. As grateful as I was for their hospitality, I felt some of my national superciliousness return. I took the sparse attendance as yet more evidence that, by contrast to the United States, European Jewish life is both cloistered and meager.

Instead of haughtiness, I should have felt admiration. Sustaining a synagogue in a country where most Jews were murdered in the Holocaust requires a kind of fortitude that most American Jews have never had to summon. It’s a quality that, sadly, we may need more of in the years to come.

Synagogue Shootings Shattered Our Illusion. America Is No Safe Haven For Jews.