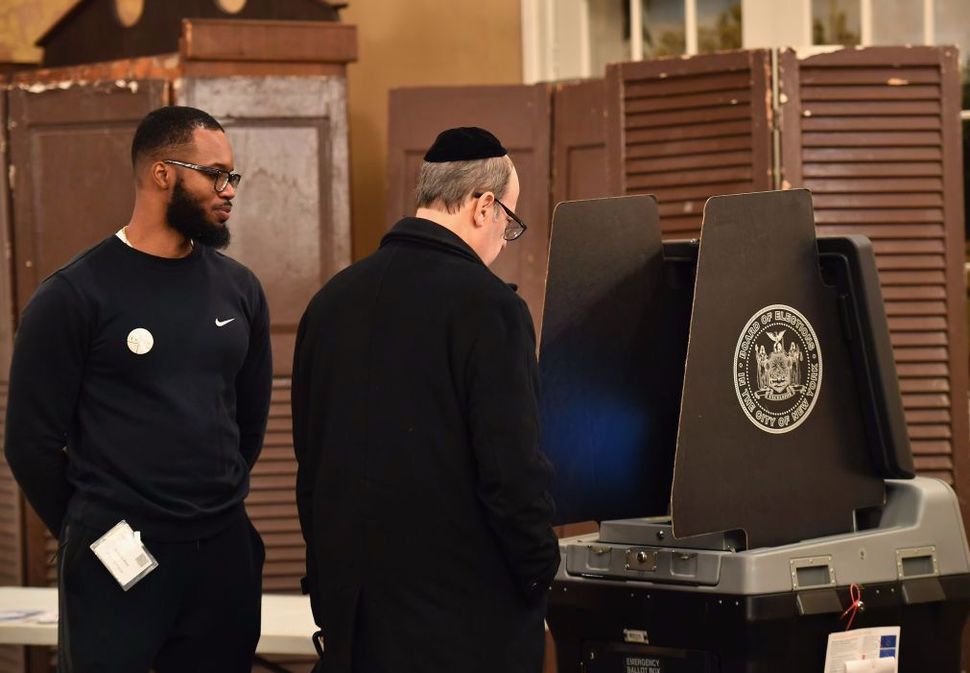 Another Election Day is upon us, which means that countless American Jews are heading to voting booths across the country — to vote for Democrats. It’s certainly not news that Jews are a politically liberal group with deep concerns about social justice. Hundreds of books, columns, polls, and surveys have firmly established that American Jews have long been an ideologically left of center group on the American scene, not to mention politically active supporters of Democrats.

What is newsworthy, though, is that the Trump Presidency, during which the American embassy was moved to Jerusalem, has coincided with American Jews drifting leftward — indeed, the furthest left they have positioned themselves in recent history.

The American Jewish Committee has been regularly measuring the ideological leanings of the American Jewish community since 1997. The data shows that liberal identifiers — those who lean to the left all the way to avowed liberals — have always been the plurality over the past two decades. 45% of the Jewish community identifies as being “left” on average, 32% identify as moderate, and the remaining 23% identify as conservative to some degree.

While the data shows American Jews are left of center in general, it is important to remember that for the bulk of the past two decades, only a plurality — and not a majority — of American Jews have historically identified as liberal.

By 2019, however, a majority of American Jews identified as liberal, and the general ideological trend has moved dramatically.

Looking at the past two decades, the proportion of conservative Jews has moved a few points up and down in the mid-20 percentile range but essentially remained stable for the past 22 years. Moderates and liberals were also fairly stable with moderates hovering around the low 30% range and liberals around the mid 40% range from 1997 through 2015.

By 2016, the trends abruptly changed. The percentage of moderates dropped 12 points and the figure has remained in the low 20s since. Concurrently, the percentage of liberals shot up sharply and has remained significantly higher such that in 2015, 45% of American Jews identified as being on the left and by 2019, that figure was 56% — an 11 point increase.

The only other time a majority of Jews identified as so overwhelmingly liberal was briefly in 2008 when President Barack Obama was running for President — but that was only a blip.

Today, a majority of Jews are consistently identifying as liberal. They have done so since 2016 and they have moved from the moderate camp into the liberal camp.

This shift makes the American Jewish community unusual because there has been no concurrent move to the left among the national population whatsoever during the same time.

Looking at the national picture, data from the General Social Survey reveals that liberal identifiers are among the smallest proportion of the electorate over the past two decades, but that the numbers have barely shifted beyond a few points from the average of 27%. In fact, moderates are the largest group, at 38%, with conservatives close behind at 35%. No group shifted more than a few points off these averages over the past 22 years.

Even when we look only at college graduates in the General Social Survey to closer approximate the Jewish community, we do not see such a strong shift leftward; there is a small increase in liberal and moderate identifiers and a small decline in conservatives. Nothing in the national data comes close to the scale of the shift that has recently happened within the Jewish community.

While more research is needed to truly understand why this noteworthy change has occurred in the past four years, it is most likely the case that a confluence of factors in the socio-political environment have activated the non-Orthodox Jewish community to engage and reject the current status quo.

In other words, while those who are Orthodox are generally conservative, those who are more secular tend to be moderate and liberal and are most likely deeply concerned with the very real questions of nationalism, equity and fairness, immigration, mobility and taxation, and the very disturbing rise of anti-Semitism that have all become salient political questions since the end of the Obama Presidency.

Whether motivated by historic social justice considerations or simply disdain for the current direction of the nation and the positions of the Trump administration, the Jewish community has moved sharply toward the left while the nation as a whole has not.

American Jews may find themselves once again on the vanguard of the political change and a leading force for political change. It will be interesting to see how the Jewish community votes this November.

Samuel J. Abrams is a professor of politics at Sarah Lawrence College and a visiting scholar at the American Enterprise Institute.