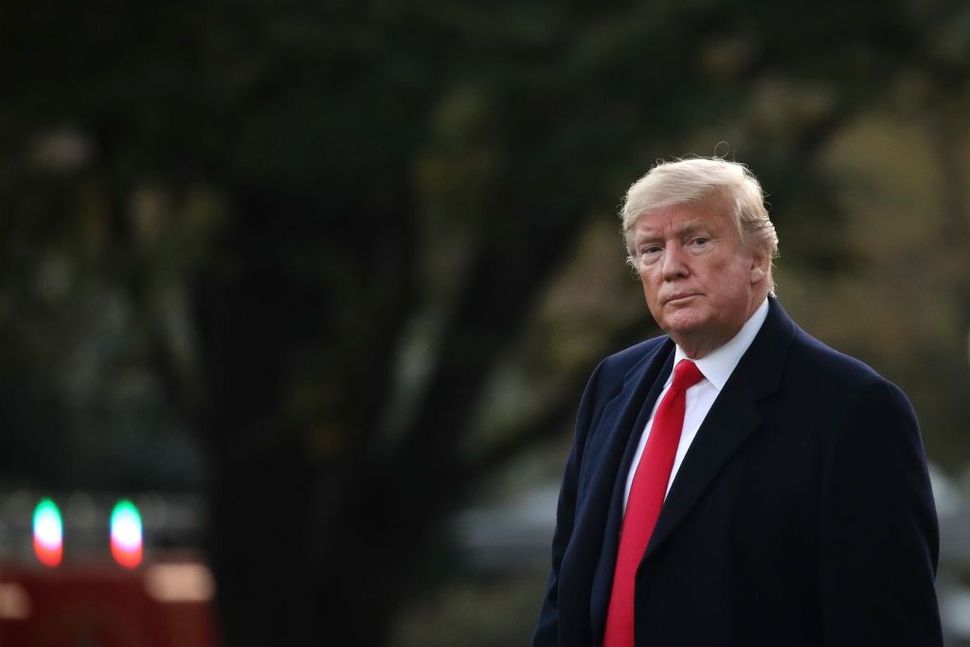 U.S. President Donald Trump leaves the Oval Office and walks toward Marine One on the South Lawn of the White House on November 14, 2019 in Washington, DC. Image by Getty Images

At the end of August, the Department of Education sent an official letter to the Duke-University of North Carolina Consortium for Middle East Studies threatening to withdraw federal funding that had only recently been renewed for four years. At stake was $235,000, an annual allocation of “Title VI” funds which the federal government has given to colleges and universities since 1958 to increase Americans’ knowledge of third world areas and languages.

The letter accused the Consortium of putting too much emphasis on Middle Eastern culture, including music and film, and on “positive” aspects of Islam, while paying too little attention to “discrimination against Christians, Jews, Baha’is, Yadizis (sic), Kurds, Druze, and others” in the Middle East.

The letter also complained that too many graduates were choosing academic careers; that there was not enough emphasis on language training and geopolitics; that programming manifested a “lack of balance of perspectives”; that it was designed for “advancing ideological priorities”; and that UNC’s reports of how the funds were being used did not specify how individual expenditures were serving American national interests.

But the letter represented more than the sum of its parts. The letter followed the appointment of Kenneth Marcus to the position of Assistant Secretary of Education for Civil Rights in the Department of Education. Marcus came to the position from the D.C.-based advocacy organization the Louis D. Brandeis Center for Human Rights under Law. And his appointment was yet another example of President Trump’s signature move: putting industry leaders or lobbyists with very specific agendas in positions to either eliminate or transform the meaning of government regulation so as to serve those agendas.

Very much in that vein, the letter to UNC, like Marcus’s appointment, represents nothing short of a perversion of the Department of Education’s civil rights mandate, a move designed to chill free speech and criticism of Israel. Marcus came to his position not to protect and expand learning opportunities in American educational institutions, but to threaten and narrow them, especially when it comes to open debate about Israel and the Palestinians. And his use of accusations of anti-Semitism in order to silence debate about Israel is being done with the sanction of the President of the United States.

The letter’s origins are as bizarre as they are instructive. In March 2019, a right-wing provocateur named Ami Horowitz attended a conference entitled “Conflict over Gaza: People, Politics, and Possibilities.” The conference was partially funded by the Duke-UNC Consortium for Middle East Studies. Horowitz then distributed a heavily edited video of some of the proceedings that included images of a Palestinian rapper ironically portraying the absurdity of treating criticism of Israel as anti-Semitic.

Stripping away its context, Horowitz forwarded this “evidence” of anti-Semitism to Republican Congressman George Holding of North Carolina. Holding then sent a letter to Education Secretary Betsy DeVos asserting that “according to first-hand accounts, the conference had a radical anti-Israel bias,” that a “brazenly anti-Semitic song” had been sung, and that “several of the conference’s speakers are actively involved in the Boycott, Divestment, and Sanctions (BDS) movement.” DeVos then launched an investigation into the Consortium’s use of funds, leading to the letter accusing Duke and the University of North Carolina of malfeasance.

In a point-by-point rebuttal, UNC Vice Chancellor for Research Terry Magnuson, exposed the letter’s charges as either trivial or wrong. Magnuson provided data showing that for several Middle Eastern languages, the Consortium had among the highest enrollments in the country. He cited multiple programs on Middle Eastern Christians, Bahai’s, and Yazidis, along with outreach activities focused specifically on Christianity and Judaism in the region.

He also noted that the proportion of the Consortium’s graduates working in government or business was greater than that working in higher education, and stressed the diversity of the Consortium’s offerings, with more than 100 programs each year reflecting “diverse perspectives and a wide range of views.” As it happens, neither of the programs criticized in the Department of Education letter “were supported with Title VI funding.”

But even if this rebuttal helps UNC, the letter had done its job, standing as a chilling warning to every university whose Middle East programs receive Title VI funding and to the much larger number who aspire to receive it in the future. The letter provided a vivid illustration of how extreme Israel advocacy groups, whose influence is strong within the Trump Administration, seek to stifle public discussion of issues pertaining to Israel and the Palestinians.

It was of a piece with Marcus’s appointment. Marcus, who did not respond to a request for comment, has a long record of opposing open discussion of Israel-Palestine issues on college campuses and of making accusations of anti-Semitism to achieve that objective. He was one of the drafters of an amended version of a definition of anti-Semitism posted temporarily on the website of a now defunct EU agency that emphasized how likely it was for criticism of Israel or of Israel supporters to be anti-Semitic.

Concerned precisely with how this “working definition” was being exploited to suppress critical discussion of Israel, the EU declared it void in 2013. Nevertheless, in his book “The Definition of Anti-Semitism”, Marcus urged using his version of the definition to monitor anti-Semitic behavior, and elsewhere exploited its breadth and flexibility to weaponize anti-Semitism as an accusation against critics of Israel.

Beyond the definition of anti-Semitism, Marcus seems to have a more general animus toward centers of Middle East studies. It was fully apparent in a report he authored in 2014 entitled “The Morass of Middle East Studies: Title VI of the Higher Education Act and Federally Funded Area Studies.”

There he describes Middle Eastern studies centers as “notorious for one-sided approaches hostile to the United States, the West, and Israel,” and as “a national embarrassment.” The report is mostly a catalog of “findings” produced by extreme Israel advocacy groups such as AMCHA, Middle East Forum, Campus Watch, Scholars for Peace in the Middle East, and the Zionist Organization of America. These groups, and others like them — such as Canary Mission and the Committee for Accuracy in Middle East Reporting and Analysis — are known for intimidation and smear campaigns against scholars and students whose views they oppose.

In his “Morass” report, Marcus repeatedly quoted representatives of these organizations, disingenuously describing them as “reformers.” Reproducing their fervid accusations of rising anti-Semitism on American campuses, Marcus failed to note that the organizations making the accusations were deploying the weaponized definition of anti-Semitism that both they, and Marcus himself, had promoted in order to make such attacks possible.

In 2016, Marcus and his allies successfully pressed the Senate to approve “The Anti-Semitism Awareness Act,” designed to use their concept that “anti-Zionism or anti-Israelism is anti-Semitism” to limit Title VI funding to universities judged guilty of sponsoring or allowing “anti-Semitic” activities. The bill failed in the House, following raucous hearings, even as Marcus’s nomination to head the civil rights agency responsible for enforcing Title VI rules was approved.

As a growing number of journalistic and scholarly accounts attest, the attack on Middle East studies at Duke-UNC, anticipated by Marcus’s 2014 report, is part of a systematic campaign. In state legislatures, news outlets, social media, and on college campuses, the groups that Marcus represents use accusations of anti-Semitism to delegitimize not only the BDS movement, but any critical approach to the Israel-Palestine debacle which highlights the force of Palestinian claims.

For example, in 2015 Tammi Rossman Benjamin, a founder of AMCHA, one of the “reformer” groups cited most heavily by Marcus, explained the rationale for promoting expansive definitions of anti-Semitism. While insisting her purpose was not to enforce “a speech code,” she made it clear that adoption of the correct definition of anti-Semitism would render BDS itself anti-Semitic, along with anti-Israel mobilization techniques common on college campuses, such as building a mock-up of the Israeli separation barrier or “wall” or distributing mock Israeli-style “eviction” or “demolition” orders.”

To fund this effort, three billionaires — Sheldon Adelson, Haim Saban, and Adam Milstein — headlined a Las Vegas “summit” in June 2015 that raised $50 million for an anti-BDS campaign on US college campuses to “demonize the demonizers.”

These kinds of efforts are extraordinarily dangerous. With the disappearance of plausible routes to a negotiated two-state solution, confused and frustrated liberal Zionist progressive Jews find themselves attacked by both Zionist Organization of America members and fierce left-wing opponents of Israel. The open and evidence-based discussion they desperately need is thus prevented, not only by anti-Semitic and other prejudices that polarization brings to the fore, but by cynical use of that reality to suppress contrary opinions and thwart any attempt to evaluate Palestinian claims on their merits.

The broader risk of government enforced accusations of anti-Semitism against Middle East scholars, supporters of Palestinians, or critics of Israeli policies, is to trivialize and obscure the dangerous reality of white supremacist and neo-Nazi Jew hatred. By undermining the credibility of valid warnings of anti-Semitism, those who use the label to slander and intimidate political rivals serve the interests of the real haters of Jews.

Ian S. Lustick is a professor of political science at the University of Pennsylvania and author of Paradigm Lost: From Two-State Solution to One-State Reality, (2019).