Shame On The Department Of Ed For Their Islamophobia. We Jews Know The Toll Of Censorship. 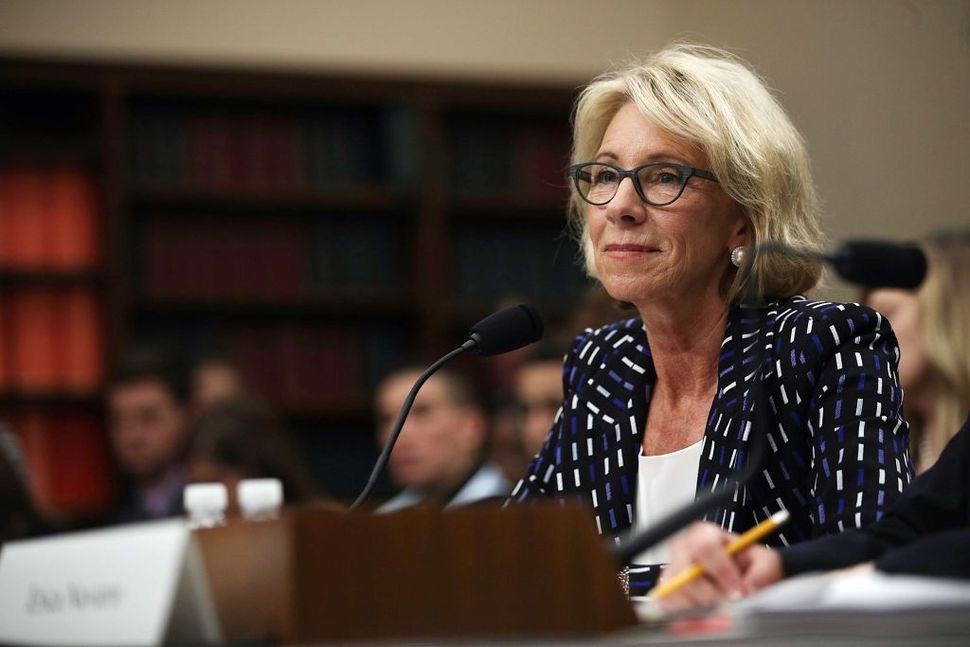 In August of this year, the U.S. Department of Education sent a letter to Duke University and the University of North Carolina at Chapel Hill threatening to revoke $235,000 in federal funding unless they agreed to significantly revise its educational programs.

The letter cited the universities’ positive portrayal of Islam, noting that in the consortium’s educational materials, “there is a considerable emphasis placed on the understanding the positive aspects of Islam, while there is an absolute absence of any similar focus on the positive aspects of Christianity, Judaism, or any other religion or belief system in the Middle East.” The letter goes on to claim that the Duke-UNC CMES “appears to lack balance as it offers very few, if any, programs focused on the historic discrimination faced by, and current circumstances of, religious minorities in the Middle East, including Christians, Jews, Baha’is, Yadizis, Kurds, Druze, and others.” It concludes that if the Duke-UNC CMES does not radically overhaul its educational programs, it will be at risk of losing its federal funding.

Though the letter itself does not explicitly mention Israel, it was the culmination of a federal investigation that began in April, when Republican Congressman George Holding sent a letter to Secretary of Education Betsy DeVos warning about “reports of severe anti-Israel bias and anti-Semitic rhetoric at a taxpayer-funded conference, ‘Conflict Over Gaza: People, Politics, and Possibilities.’” In particular, Holding cited the fact that the conference hosted a rapper, Tamer Nafar, who allegedly performed a “brazenly anti-Semitic song,” along with the fact that “several of the conference’s speakers are actively involved in the Boycott, Divestment, and Sanctions movement.” Holding demanded that the Department of Education put in place new policies “to ensure taxpayer funded federal grants are not awarded to organizations promoting a biased anti-Israel agenda.”

That’s right: The U.S. Department of Education is now going to monitor the curricula of Middle East Studies departments at universities, to ensure that they are sufficiently pro-Israel in their approach.

There’s an irony to this shocking federal attack on the right of academics to perform their scholarship free from government censorship in the name of protecting Israel. For the most governmental intervention in the university has historically been weaponized against the Jews, for the benefit of Christian scholarly audiences.

The development of the study of Jewish texts and Jewish culture within the university setting, as opposed to in a yeshiva or rabbinical academy, was by its very nature tied to the emancipation of the Jews in modern Europe, and their concomitant entry into broader European culture. As Martin Goodman notes, the earliest professors of Jewish literature in European universities were Christian professors of classical Hebrew, who claimed that their study of Hebrew language and literature could help them to discover the “true” (and invariably Christian) meaning contained within the text they called the Old Testament.

By the late Renaissance, Christian Hebraists in the university setting became interested in Kabbalah, part of a broader academic trend in which Christian scholars claimed that a whole array of esoteric literature, ranging from Zoroastrian and Hermetic texts to Egyptian hieroglyphs, could be interpreted to reveal Christian insights.

European Jews themselves did not begin a widespread study of their own culture and history in an academic setting, outside of traditional centers of Jewish learning, until the early nineteenth century, when the first stirrings of emancipation spread across the continent.

The earliest academic Jewish Studies movement was guided by the need to argue that Jewish culture was an integral part of European culture, and therefore to implicitly make the case that Jews could be good, modern Europeans and deserved equal political rights to Christians.

The earliest Jewish studies scholars therefore chose to emphasize certain periods in Jewish history in which the Jewish people seemed to be better integrated into the surrounding non-Jewish societies, in particular the Hellenistic period and the “golden age” of Jewish culture in medieval Spain, in order to portray Judaism as a culture that was not at odds with integration and modern society. (Scholars of Wissenschaft des Judentums particularly loved Maimonides, who could be portrayed as a sort of archetypal modern rational Jew who was so well integrated into the surrounding culture that he served as court physician to the Muslim sultan in Egypt.)

Perhaps unsurprisingly, despite the great lengths that the scholars of went to in order to make their research seem acceptable within the modern European university, they found themselves largely “excluded from the curriculum of the universities,” which were still dominated by Christian professors. These scholars had to create their own informal networks of publishing and teaching, and were often forced to work as tutors or in other fields to support themselves. They tried to portray Jewish history in light of the political demands of modern Germany, and still found themselves excluded from the German university. Even after the official emancipation of the Jews of Germany by Otto von Bismarck in 1871, a result of German unification, informal barriers were implemented by the German government to block Jews from academic posts.

German Jewish scholars, partially excluded from the German university even after they worked hard to make Jewish history seem amenable to the modern German state, had to leave Germany and travel to the United States, a place where the government historically placed fewer restrictions on scholarship and on professors speaking publicly.

And now, the United States is doing much the same thing to professors of Middle East Studies in order that the state of Israel might be portrayed a bit more positively.

Does anyone truly think that this short-sighted move will ultimately be good for American Jewish scholars? After all, we’re living in an age in which far-right voices are blaming left-wing trends in academia that they dislike on the specter of “cultural Marxism,” an anti-Semitic conspiracy theory which characterizes the ideology of the Jewish intellectuals of the Frankfurt School, many of whom fled Nazi Germany for the United States in the 1930’s, as deliberately seditious attempts to undermine American values from within.

According to this theory, which is now so popular on the right that it is showing up in White House memos, social movements such as feminism, anti-racism, and the LGBTQ rights movement did not develop organically among oppressed movements, but were inculcated by leftist Jewish professors, who are now using their posts at the university to further undermine good white Christian society. If White House staffers are now talking about “cultural Marxism,” shouldn’t we worry about the precedent of giving the federal government the power to dictate university curricula?

Shouldn’t we worry about where else this power might be abused?

The Education Department’s new policy is blatantly Islamophobic, and it should be opposed on those grounds alone. But in an age in which prominent American politicians attack Jewish academics as “cosmopolitans,” does anyone think that a policy that enables the US government to intervene in university settings to dictate curricula will ultimately be good for the Jews?

In the nineteenth century, an embattled religious minority in Germany responded to political pressure by tailoring their scholarship to external political demands, and it affected the course of Jewish studies as a discipline for generations. We really ought to know better by now.

Joel Swanson is a Ph.D. student at the University of Chicago, studying modern Jewish intellectual history and the philosophy of religions. He identifies as culturally Marxist without actively practicing. Find him on Twitter at @jh_swanson.

Shame On The Department Of Ed For Their Islamophobia. We Jews Know The Toll Of Censorship.