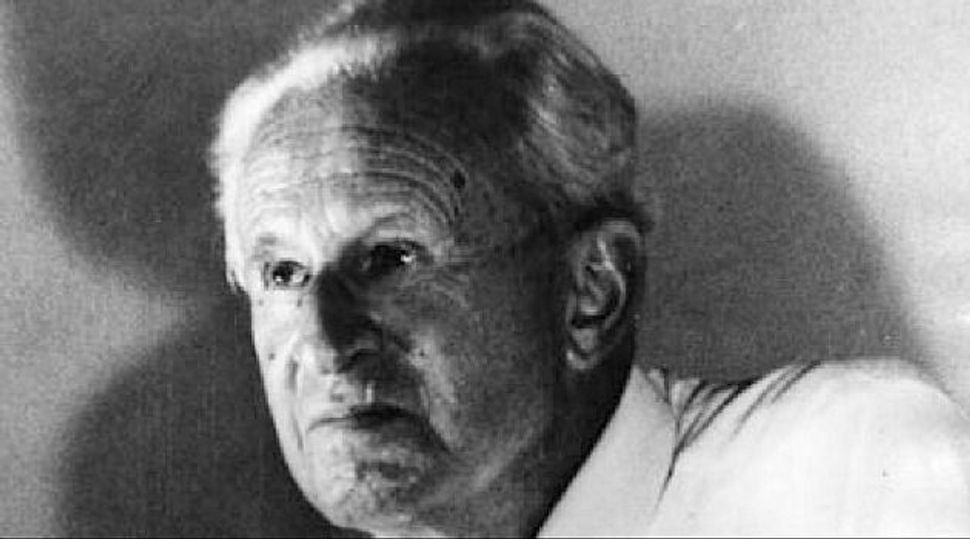 Mentored By Heidegger: Herbert Marcuse was raised in an assimilated Berlin family which nevertheless celebrated his bar mitzvah. Image by Getty Images

Most accounts of the Frankfurt School of critical theory, the grouping of social and political thinkers briefly based at the Frankfurt Institute for Social Research until Hitler’s arrival to power forced them into exile, note that they were predominantly German Jews. Yet to date, whether to praise or — more often — blame these philosophers, sociologists, and psychoanalysts influenced by Karl Marx, there has been no concentrated analysis of how Judaism impacted their lives and work.

Among these still-resonant names are the philosopher/sociologists Max Horkheimer, Theodor W. Adorno, and Herbert Marcuse. Horkheimer and Adorno co-authored the weighty “Dialectic of Enlightenment” (1947), while Marcuse’s political theorizing, updating Marxism for current conditions, received a boost of publicity in the revolutionary 1960s. Then there was Erich Fromm, a social psychologist and yet another philosopher/sociologist, from an Orthodox Jewish background. Several more noted German Jewish authors merit attention as members or in the periphery of the Frankfurt School, such as Siegfried Kracauer and Walter Benjamin, so it was a useful idea for Jack Jacobs, professor of political science at John Jay College and the CUNY Graduate Center, to offer this compellingly detailed analysis.

“The Frankfurt School, Jewish Lives, and Antisemitism” is in part biographically based, revealing the essence of thinker’s’ hearts and lives while avoiding anecdotal trivia. As the political historian Zvi Rosen has noted,, Max Horkheimer wrote about anti-Semitism starting around the time of his military service in World War I. Previously, school classmates had screamed “Jew!” at Horkheimer, but it was as a soldier, as he remarked in a letter home from 1917, that he was “regarded with spiteful apprehension because I am Jewish.” Citing these and other examples, Jacobs convincingly refutes Martin Jay, an historian of the Frankfurt School who claimed that Horkheimer was guilty of a “facile dismissal of specifically Jewish problems.” To the contrary, the German Jewish sociologist Leo Löwenthal (1900–1993), yet another associate of the Frankfurt School, asserted that “in his thinking, [Horkheimer] was always very conscious of the Jewish heritage.”

Such clarifications are useful because although professional writings before their exile from Germany were not explicitly about Jewish matters, “Dialectic of Enlightenment” and “The Authoritarian Personality,” also co-authored by Adorno, would be “deeply colored by the desire to elucidate and confront hatred of Jews,” Jacobs reminds us.

In 1937, in a letter to the German Jewish literary scholar Hans Mayer, Horkheimer claimed that anti-intellectualism “represents sexual envy and resentment of a pleasurable attitude toward life of which one doesn’t feel oneself capable. Hatred of the Jews has always been hatred of thinking, and naturally the Jews themselves are also in large measure animated by this.”

This foreknowledge continued with personal ruminations by Adorno, born Theodor Ludwig Wiesengrund in Frankfurt to a Catholic mother and Jewish father who had converted to Protestantism. Adorno’s identification as a Jew grew along with European persecution, as noted in a February 1938 letter to Horkheimer. Written the day before Adorno fled Europe for America, the letter predicted that any Jews who stayed in Germany would be “extirpated,” which went against the then-more hopeful attitudes of German Jews.

Once in America, Horkheimer and Adorno sought funding for studies on anti-Semitism there. They may have felt that Europe was already a familiar lost cause, but in the U.S.A., they were freshly surprised to learn that anti-Semitism was also rife, from university quotas barring Jewish students and faculty to popular radio broadcasts by the Roman Catholic priest Charles Edward Coughlin, who preached hatred of the Jews to 1930s America.

To this effect, Adorno wrote home to his parents in 1940: “Fascism in Germany, which is inseparable from anti-Semitism, is no psychological anomaly of the German national character. It is a universal tendency …The conditions for it – and I mean all of them, not only the economic but also the mass psychological ones – are at least as present [in America] as in Germany…and the barbaric semi-civilization of this country will spawn forms no less terrible than those in Germany.”

The exiles of the Frankfurt School were appalled to find that in America, some forms of prejudice were even more blatantly established than as yet had been the case in Germany, such as openly barring Jews from hotels and jobs. In 1942, as the tragedy of the Holocaust began to unfold, Horkheimer wrote to Löwenthal: “These days are days of sadness. The extermination of the Jewish people has reached dimensions greater than at any time in history. I think that the night after these events will be very long and may devour humanity.”

This apt grimness would be echoed by Adorno’s most famous statement from a 1949 essay, that “to write poetry after Auschwitz is barbaric. And this corrodes even the knowledge of why it has become impossible to write poetry today.” Continuing any culture which had produced Auschwitz was for Adorno a dubious project, compounded by the survivor’s guilt expressed in his “Negative Dialectics” (1966): “It may have been wrong to say that after Auschwitz you could no longer write poems. But it is not wrong to raise the less cultural question whether after Auschwitz you can go on living – especially whether one who escaped by accident, one who by rights should have been killed, may go on living.”

Possibly sharing this survivor’s guilt, Herbert Marcuse was raised in an assimilated Berlin family which nevertheless celebrated his bar mitzvah. Likely blocked from advancement in his academic career in the 1930s by his anti-Semitic mentor Martin Heidegger, Marcuse would make public protests in the 1970s about the persecution of Soviet Jewry. During the height of his renown, he would routinely receive hate mail from Americans such as the California author Chet Schwarzkopf, who wrote to Marcuse that after learning of his “classroom antics, I have come to wonder – along with many another veteran of World War II – if Hitler wasn’t right after all.”

Perhaps due to such reminders, Marcuse always staunchly defended Israel as an “asylum for persecuted Jews, if its role is to protect Jews from a second Holocaust,” while freely criticizing Israeli politics. In December 1971 Marcuse visited Israel, where he met with Moshe Dayan,, revealing more commitment to the Jewish state than his former colleagues Horkheimer and Erich Fromm. Yet even Horkheimer evinced an interest in his roots, especially after an abortive effort to return to academic work in Germany, before leaving for Switzerland in the late 1950s, due to continuing German anti-Semitism that he attributed to “unmastered, repressed guilt feelings.” Horkheimer recited Kaddish over his parents’ graves, attended synagogue on high holy days, and in 1971 made a special request to the Jewish community of Stuttgart in the region where he was born, to see if the Hebrew name which he was given at birth could be found.

While they remain appropriate targets for vehement political criticism today, the thinkers of the Frankfurt school must henceforth be seen, thanks to Jacobs’ lucid presentation, in the light of their Jewish ancestry and awareness of the international blight of anti-Semitism.