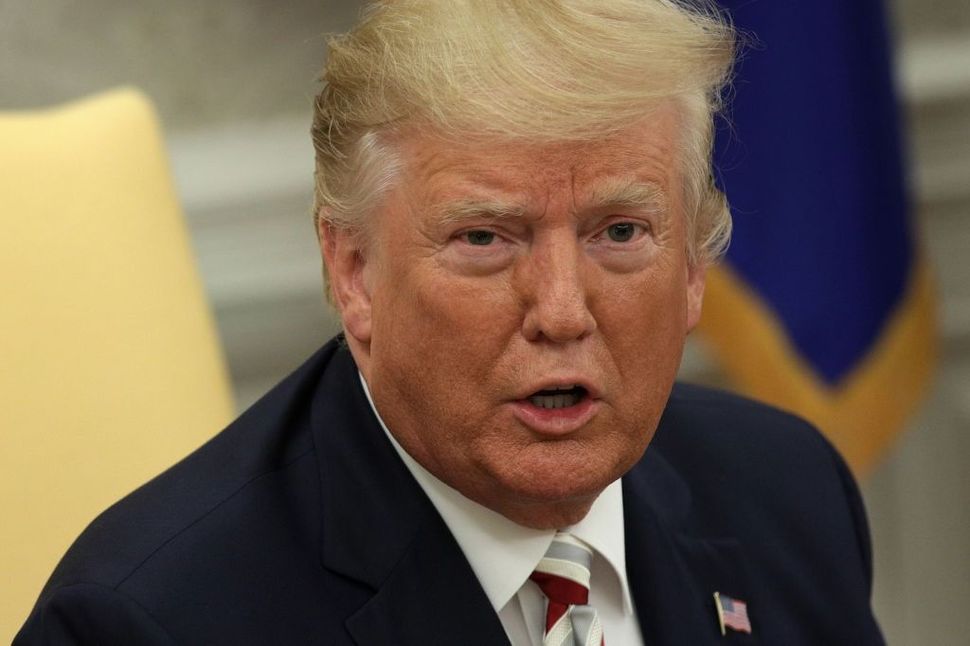 President Donald Trump speaks to members of the media as he meets with President of Romania Klaus Iohannis in the Oval Office of the White House, August 20, 2019. Image by Alex Wong/Getty Images

President Trump said Tuesday that American Jews who vote for the Democratic Party may be showing “great disloyalty.”

Speaking to reporters in the Oval Office while meeting with the President of Romania, Trump was asked about his criticisms of Reps. Ilhan Omar and Rashida Tlaib, who were barred from entering Israel last week due to their support for the boycott, divestment and sanctions (BDS) campaign against Israel.

“Any Jewish people that vote for a Democrat — I think it shows either a total lack of knowledge or great disloyalty,” Trump said.

At least two-thirds of American Jews voted for the Democratic candidate in every presidential election since 1992, according to the Jewish Virtual Library. Around 71% of Jews voted for Hillary Rodham Clinton over Trump in 2016, and 76% voted Democrat in the 2018 midterms.

Many online observers claimed that Trump had invoked the anti-Semitic trope of “dual loyalty,” which claims that Jews are more loyal to Israel than their home countries.

Democratic Senator Brian Schatz of Hawaii, who is Jewish, was the first elected official to weigh in:

“Yet another example of @realDonaldTrump continuing to weaponize and politicize anti-Semitism. At a time when anti-Semitic incidents have increased – due to the president’s emboldening of white nationalism – Trump is repeating an anti-Semitic trope,” tweeted Halie Soifer, the executive director of the Jewish Democratic Council of America. “If this is about Israel, then Trump is repeating a dual loyalty claim, which is a form of anti-Semitism. If this is about Jews being ‘loyal’ to him, then Trump needs a reality check – we live in a democracy and Jewish support for the @GOP has been halved in the past four years.”

The group Democratic Majority for Israel, which aims to increase support for Israel in the Democratic Party, also criticized Trump, but did not accuse him of anti-Semitism.

“[Trump’s] appalling statement demonstrates that he understands neither American democracy, nor American Jews,” they wrote on Twitter. “He also reveals, what we suspected—his professed support for Israel is based on personal political calculation, not principled commitment.”

But the Republican Jewish Coalition came to the president’s defense.

“President Trump is right, it shows a great deal of disloyalty to oneself to defend a party that protects/emboldens people that hate you for your religion,” the organization said in a tweet. “The @GOP, when rarely confronted w/anti-Semitism of elected members always acts swiftly and decisively to punish and remove.”

This is not the first time Trump has been accused of invoking the “dual loyalty” trope. In an address to the RJC in April, Trump referred to Israeli Prime Minister Benjamin Netanyahu as “your prime minister.”

Omar and Tlaib have themselves also been accused of using such language.

Tlaib tweeted in January that senators who voted for an anti-BDS bill during the government shutdown “forgot what country they represent.”

And Omar, when talking about advocacy for Palestinians, brought up “political influence in this country that says it is okay to push for allegiance to a foreign country.”

Trump has repeatedly accused the pair of anti-Semitism and other members of their so-called “Squad” of anti-Semitism, including in a tweet on Tuesday morning, the day after Tlaib cried at a press conference discussing her recent experience.

“Sorry, I don’t buy Rep. Tlaib’s tears,” he tweeted. “I have watched her violence, craziness and, most importantly, WORDS, for far too long. Now tears? She hates Israel and all Jewish people. She is an anti-Semite. She and her 3 friends are the new face of the Democrat Party. Live with it!”