Omar: U.S. Should Reconsider Aid To Israel After Banning Her, Tlaib 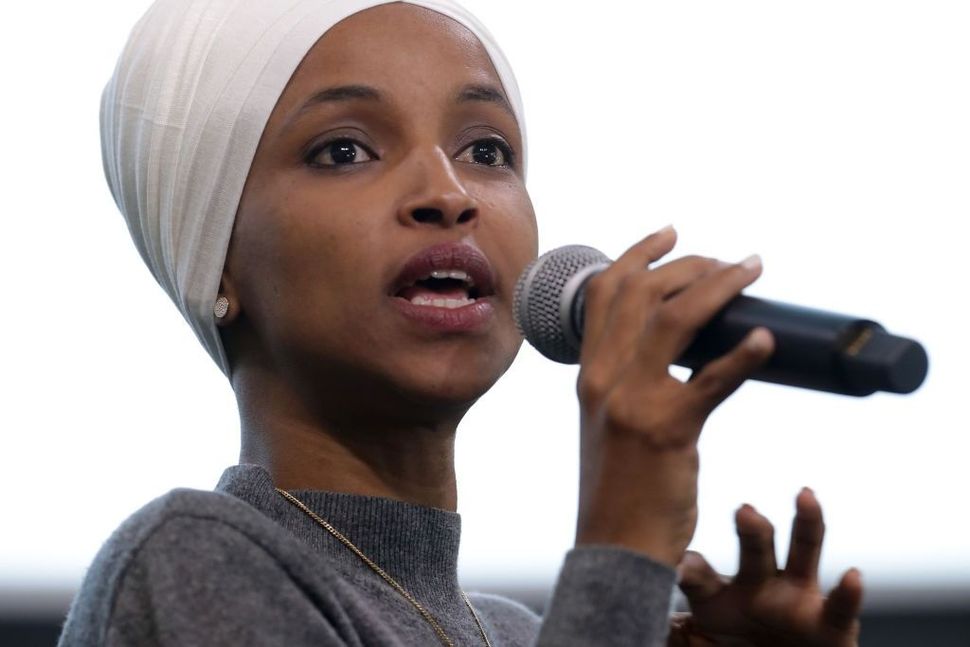 (JTA) — Rep. Ilhan Omar said that Israel’s decision to bar her and Rep. Rashida Tlaib from visiting the country last week was an unprecedented step in the U.S.-Israel relationship, and hinted that Congress should consider the move when allotting the approximately $3 billion in aid the U.S. supplies to Israel every year.

“Denying a visit to duly elected members of Congress is not consistent with being an ally,” she said Monday at a joint press conference with fellow Democrat Rep. Rashida Tlaib in her hometown Minnesota district.

Tlaib, who planned on visiting her grandmother in the West Bank during her visit to the region, spoke after Omar and broke into tears midway through her remarks.

“All Americans should be deeply disturbed,” Tlaib said of Israel’s decision.

Omar reiterated that she had planned to meet directly with Israeli members of the Knesset, the Israeli legislature, and with Israeli security officials during the trip, which would have taken them to Palestinian population centers in Jerusalem and the West Bank.

Omar has not specified which Knesset members she would have met with.

“All things had been done by previous members of Congress,” Omar said.

Tlaib noted that Israeli military veterans would have also joined the freshman congresswomen on the trip, apparently referring to members of Breaking the Silence, a group of former Israeli soldiers who oppose the occupation.

“They also desperately want peace and self determination for their Palestinian neighbors,” Tlaib said.

Israel’s government announced last Thursday that it would not allow the Democratic congresswomen to make their scheduled visit to Israel because both have declared support for the Israel boycott movement. A 2017 law entitles the state to deny entry to boycott activists.

Omar said that she believes President Trump influenced Israel into making the decision to draw a wedge between Muslim and Jewish Americans. She added that she is “grateful for the solidarity” shown by some of her congressional colleagues.

Israeli officials, including Ambassador to the U.S. Ron Dermer and Foreign Minister Yaakov Katz, have  denied that Trump’s comments on the issue, calling for the two lawmakers to be banned, influenced Israeli Prime Minister Benjamin Netanyahu’s decision to block their visit.

Omar: U.S. Should Reconsider Aid To Israel After Banning Her, Tlaib