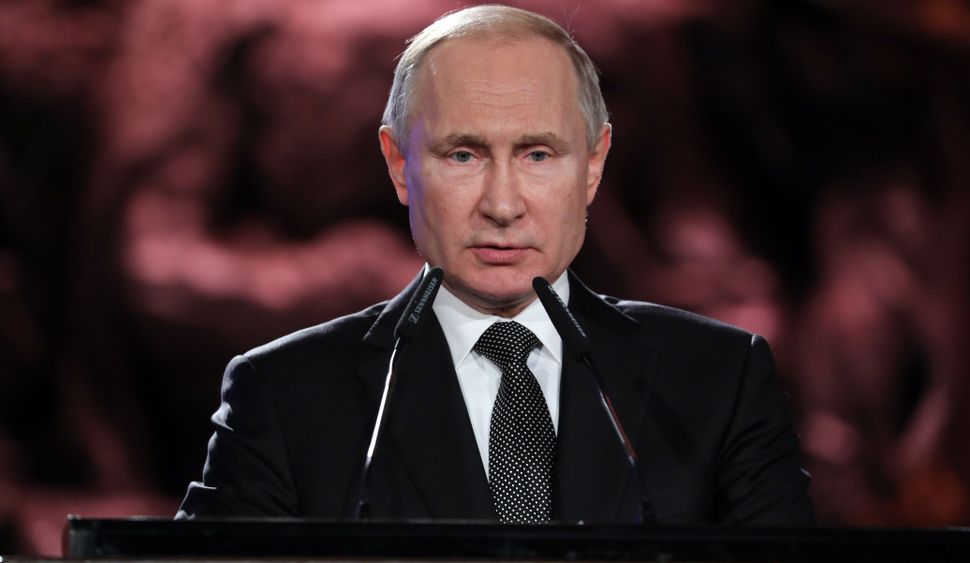 The use and abuse of the memory of the Holocaust for political aims, however shocking, is not new. Few seem able to resist the pull of such a stark morality tale of good vs. evil when constructing their own histories. Until recently, though, Russia was one of the few players in WWII who had managed to skirt the temptation. The Holocaust played a minimal role in Russia’s official World War II memory. After decades of neglect, it entered Russian state memory primarily as a background against which to highlight the heroism of the Red Army. But that is shifting now.

During a recent speech at the dedication of a monument to the siege of Leningrad, Russian President Vladimir Putin showcased new elements of Russia’s state historical narrative, and demonstrated where his latest thinking is on the Holocaust, anti-Semitism, and the way they fit in his historical memory project. Specifically, Putin telegraphed that the Kremlin now sees the distinct and separate story of the Jewish wartime suffering as supportive of its broader campaign to use the war to whitewash and upgrade the general Soviet—and, ergo, Russian—image.

“History knows many examples of singular fortitude, heroic victimhood & massive human tragedies,” Putin said. “But the siege of Leningrad and the Holocaust cannot be compared to anything else.” He then went on to equalize Holocaust denial with what he sees as attempts to diminish Soviet victimhood. “In Israel, as in Russia, people are worried about attempts to deny the Holocaust, revise the results of World War II, and whitewash murderers and criminals,” he said.

The phrase “to revise the results of World War II” is Putin’s long-term shorthand for Central and East Europeans’ attempts to point out that for them, the end of the war was not a liberation but a beginning of a new, Soviet, occupation. Putin, naturally, rejects this perspective and views himself as the keeper of “true” memory of World War II who is standing up to a revisionism that seeks to diminish the memory of Soviet victimhood and heroism by reminding the world of Stalin’s crimes.

Putin went on to equate anti-Semitism with “Russophobia”—a recent buzzword that Russia coined to signify a supposed fear and hatred of all things Russian. He also spoke of “our shared memory” (meaning, Jewish and Russian) of Nazi crimes and “our shared rage” over them.

Needless to say, the siege of Leningrad was horrific, but it was not the same as the Holocaust; nor does stating this in any way diminish its horror or the heroism and sacrifice of the Soviet people.

We can debate the meaning of the term Russophobia and whether this phenomenon actually exists, but whatever it is, it is in no way, shape or form the same as anti-Semitism. And arguing that the Soviet Union was less than an angel is not even close to having the same meaning and implications as Holocaust denial.

These clarifications of course would matter little to Putin, whose objective is simple: By drawing parallels with the Holocaust, he is aiming for the same kind of moral clarity that characterizes the Holocaust.

But there cannot be black and white moral clarity when it comes a state whose people lost tens of millions in the war but whose leader, Joseph Stalin, murdered a thousand of its own citizens a day at the height of political repressions in 1937; undermined the country’s military capability by purging some of its most gifted military leaders right on the eve of the war; signed a pact with Hitler; and after the war unleashed anti-Semitic campaigns at home and abroad while burying evidence about the Holocaust. Putin can either whitewash Stalin and the Soviet Union or he can claim that he stands for historical truth, but he cannot do both. This is obvious. But there are aspects of the Kremlin’s history-based propaganda that are far more subtle.

In a second speech at the Yad Vashem World Holocaust Forum, where 46 world leaders gathered to mark the 75th anniversary of the liberation of Auschwitz, Putin —credit where it’s due—highlighted the fact that some 40% of the victims of the Holocaust were Soviet Jews who were murdered in German-occupied Soviet territories. I have written a lot about this orphan of collective Holocaust memory and so was gratified to hear the Russian president highlight this part of the Holocaust at this high-profile international meeting. What spoiled the moment was that this, too, appeared to have a clear political objective: Rather than simply honoring the victims, Putin used these facts to score his usual political points by highlighting collaboration by Ukrainians, Lithuanians, and Latvians. He is not wrong, of course. But there is something worthy of note here: The Kremlin has carefully constructed its historical narratives in such a way as to assign the darkest parts of shared Soviet heritage to its former vassals, while annexing the positive ones to itself.

The truth is that ethnic Russians also collaborated with the Nazis, including in the Holocaust in Russia proper. And millions of ethnic Ukrainians fought the Nazis as part of the Red Army. The countries that Putin likes to cast as collaborators also had people who saved Jews. Meanwhile, the Soviet regime massacred tens of thousands of Polish officers and intellectuals at Katyn as part of its occupation of Poland — a war crime, and an unhealed wound for Poles.

Putin’s divisions into “us”—the Russians who fought the Nazis and were the Nazis’ victims—and “them”—all the others who collaborated—is a crude and self-serving simplification, despite the fact that Lithuania, Ukraine, and other governments have recently engaged in unforgivable glorification of wartime Nazi collaborators and Holocaust distortion, making themselves easy marks for Putin’s propaganda.

Perhaps even worse, while Putin presents himself as a fighter for historical truth, no other country has done more in the post-war period to prevent the world from learning the truth about the Holocaust than the Soviet Union. According to the Israeli Holocaust historian Kiril Feferman, Russia’s KGB archives contain rich amounts of information about the Holocaust that have yet to come to light. Yet they remain sealed.

Putin also treads on extraordinarily thin ice when it comes to pointing a finger at other countries’ anti-Semitism. It is understandable that he would want the world to forget about Soviet state-sponsored anti-Semitism and especially the anti-Semitic “anti-Zionist” campaign that his former employer, the KGB, led against Jews at home and abroad. But former refuseniks and prisoners of Zion, and the million and a half of other Jews who eventually left the Soviet Union, have not disappeared into thin air. They are here, and they remember.

There are troubling signs that Russia will continue to use the Holocaust and the rise in anti-Semitism to advance its foreign policy interests — and to instrumentalize Jews in this effort. At a recent roundtable in Moscow which brought together a group of prominent Russian historians and foreign policy analysts to discuss how Russia could best use history to improve its image, the speakers zeroed in on the Jews—specifically Israelis, “world Jewry” and the “Jewish lobby in Washington”—as potential allies.

The logic is simple: since there were Jews who served in the Red Army, and the Red Army saved the remnants of European Jewry, Jews today should naturally choose Russia’s narrative over that of the increasingly nationalistic Eastern and Central European narratives.

This is a cynical calculation, and a dangerous one for Jews. The fact that the roundtable took place in the offices of a foreign policy journal, whose pages, as the Russian journalist Leonid Bershidsky observed, often provide an insight into the Kremlin’s thinking, suggests that the Jewish community needs to be paying close attention to this. In fact, the participants in the roundtable predicted that one of Putin’s messages in Jerusalem would be to equalize Russian wartime victimhood with the Holocaust.

The last time the Kremlin deployed the Holocaust and anti-Semitism in its foreign policy games was in its conflict with Ukraine. Israeli journalist Samuel Sokol documented in a recent book how much disinformation and confusion it sowed in the process, so much as to make it virtually impossible to access the truth and address the very real issues that needed addressing. Few had the appetite to even try, for fear of giving a boost to the Kremlin’s propaganda.

There are signs that Russia is turning its sights on Poland as the next target against which to apply accusations of wartime anti-Semitism and collaboration. The Jewish community should see this propaganda war for what it is and resist allowing itself to become a prop in it. The last thing the very complex relationship between Jews and Poles needs is interference from an authoritarian regime with a track record of manipulating the history of the Holocaust and anti-Semitism for its own purposes.

Numerous state entities are using history in a game of one-upmanship and propaganda. Two issues that are central for the Jews — the memory of the Holocaust and the rise of anti-Semitism — are part of that game and now appear to have specific propagandistic value for one of the largest actors on the scene: the Kremlin. It will do nothing but harm for the Jewish community to join in these games.

Izabella Tabarovsky is a scholar with the Kennan Institute at the Wilson Center focusing on politics of historical memory in the post-communist world, Holocaust and antisemitism. Opinions presented in this article are hers alone and do not represent opinions of her employer.