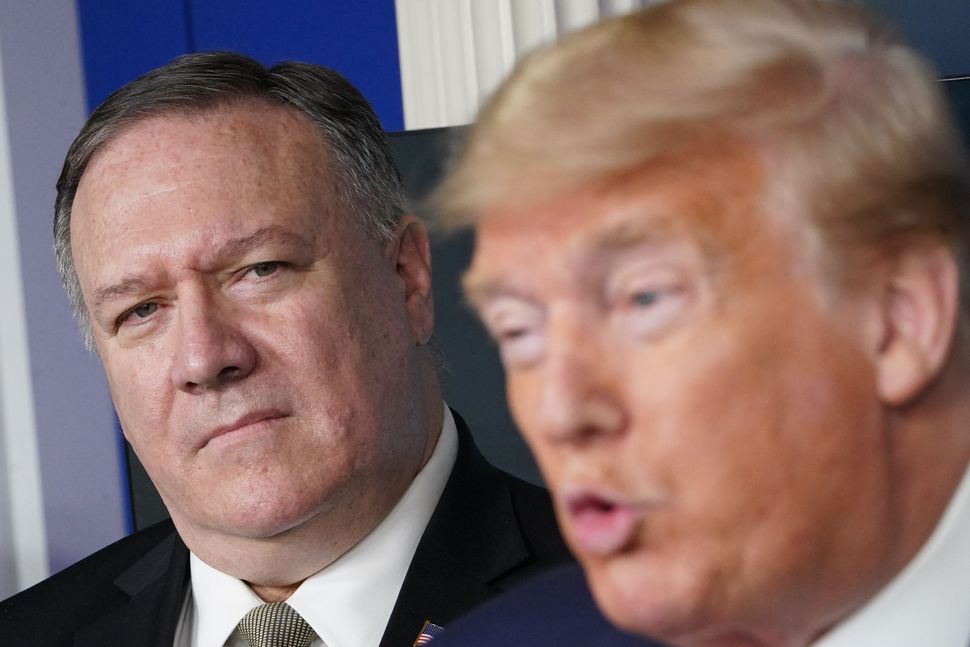 Later today, Secretary of State Mike Pompeo will address the Republican National Convention from Israel. Violating multiple State Department regulations bearing his own name, Secretary Pompeo’s speech demonstrates two realities of the Trump administration: First, Trump has a reckless disregard for the law. This speech, taped during Pompeo’s official State Department travel to Israel, is a violation of the Hatch Act, which prohibits executive branch appointees from engaging in political activity while serving in their official capacity. Second, President Trump has repeatedly politicized U.S. policy toward Israel. He has used Israel as a pawn in his partisan politicking, and today he’ll use Jerusalem as a backdrop for his reality show.

I worked at the State Department as a political appointee in the Obama administration and as a civil servant in the Bush administration. It was made very clear during this time that one could either work as a State Department employee or engage in political activity. No one at State, including Secretaries John Kerry and Condoleezza Rice, were permitted to do both, even in their personal capacity.

In the Bush administration, given this choice, I left the State Department in 2008 to work on the Obama campaign.

I returned to the State Department six years later as a political appointee. In 2016, I revisited the issue and tried to volunteer during non-work hours with the Clinton campaign. I appealed a State Department legal decision that denied my request, making the case that serving as a campaign volunteer on weekends was not the same as doing political work in my official capacity, and pointed out that other federal employees did political work in their personal time.

I received a second rejection from the State Department’s Legal Counsel, this time with a more robust explanation. I was told that the State Department holds itself to a higher standard than other federal agencies when it comes to the Hatch Act because it does not want to create the perception of politicizing foreign policy. Politics should stop at the water’s edge and, given the international aspect of the State Department’s work, all employees are barred from engaging in political activity. Full stop.

In an official State Department cable dated July 24, 2020, Secretary Pompeo himself reiterated this guidance to all employees. “The Department works to advance the national interest abroad on behalf of all Americans in a non-partisan fashion,” reads the cable. “In order to avoid any confusion or misperception in this regard, the Department’s longstanding policy is that U.S. citizen employees and family members may not engage in partisan political activity while posted or on [tour of duty] abroad, even on personal time.”

Earlier this week, after it was made public that Secretary Pompeo planned to give a speech to the Republican National Convention while on an official State Department visit to Israel, the Secretary’s office claimed to have checked with four sets of lawyers, “his personal lawyer, the White House counsel’s office, Republican National Committee lawyers and the State Department legal office.” Perhaps he took the guidance of the first three, but it’s just not plausible the State Department’s legal office gave a green light to the secretary for this overt political activity, given what he had told his employees less than one month before.

Today, the world will witness the result of Trump’s disregard for the law and diplomatic norms in Secretary Pompeo’s prime time speech from the rooftop of the King David Hotel.

@SecPompeo appears to tape his RNC address from the roof top of the King David hotel in Jerusalem. A State Department spox said Sunday that “Secretary Pompeo will address the convention in his personal capacity” and “(n)o State Department resources will be used.” pic.twitter.com/b1zMmd3FdV

But this speech, intentionally staged from Jerusalem, also reveals the president’s penchant for politicizing U.S. policy toward Israel.

Trump envisioned and apparently personally requested that Pompeo give this speech for political reasons. He believes politicizing Israel is good for his re-election, and now appears to have timed the announcement of an agreement between Israel and the United Arab Emirates to correspond with his convention.

President Trump has denigrated U.S. foreign policy by immersing in domestic politics, and appears solely driven by his personal and political agenda, as opposed to the national security interests of the United States and our allies.

Last week, Trump admitted that he moved the U.S. Embassy to Jerusalem “for the Evangelicals,” underscoring that he sees policy toward Israel through a self-serving political lens, and apparently Jewish Americans are not his target audience. This makes sense, considering nearly three-quarters of Jewish voters disapprove of the president’s performance; about the same percentage of Jewish voters opposed him in 2016. According to Pew Research, today, eight-in-10 Evangelicals support Trump, which is almost the exact inverse of Jewish voters.

It’s not just that Jewish voters reject Trump; it seems that Trump has given up on us. One year ago this week, he called all Jewish Democrats “disloyal.” And in addition to dismissing Jewish voters last week as less “excited” by his Israel policy than Evangelicals, he added a sarcastic “It’s incredible.”

We may be disloyal to him, but we’re loyal to our values, which include support of Israel, and it’s clear Trump doesn’t share these fundamental values or views.

Anyone who would use Israel as a prop in their self-promoting propaganda, and use Israel as a political wedge issue to divide Democrats and Republicans, isn’t someone who understands Jewish Americans. Jewish voters don’t want our community or the Jewish state to be used as political pawns. We see this political strategy for what it is: a danger to America, Israel and our community. And we reject Trump’s blatant and ongoing violations of the law.

Halie Soifer is the executive director of the Jewish Democratic Council of America. Previously, she served as a national security advisor to Senator Kamala Harris, and as senior policy advisor in the Obama administration.