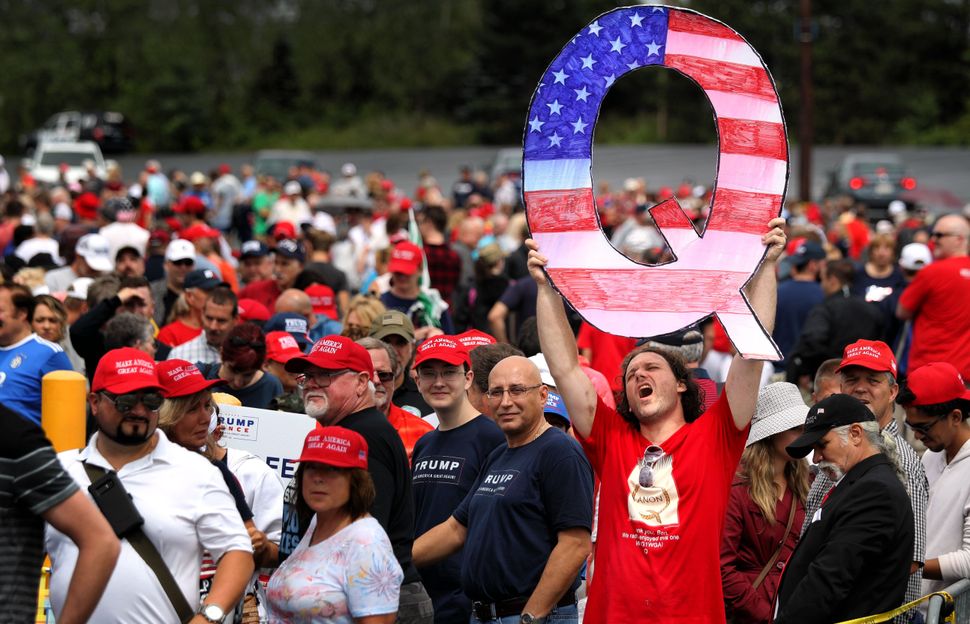 QAnon is one of the strangest developments on the current political scene. Originating in 2017 on the often racist imageboard website 4chan, its members believe that the world is really being run by a secret cabal of devil-worshiping pedophiles, who include billionaires like Bill Gates, celebrities like Oprah Winfrey, and high-profile Democratic politicians like Hilary Clinton, who traffic children, and rape, torture and murder them, to satisfy their depraved appetites. These monsters drain children of their blood and drink it during Satanic rituals — and President Trump is their arch-nemesis.

There is a strong current of anti-Semitism in the QAnon worldview, ranging from dog-whistle rants about George Soros to explicit and overt claims, like when “angel mom” Mary Ann Mendoza endorsed a Twitter thread about a Jewish plot to take over the United States.

Exclusive: An RNC speaker set to appear tonight urged her supporters to research an anti-Semitic conspiracy theory about a global Jewish plot to enslave the “goyim.” https://t.co/aOpqlQ5OTI

The anti-Semitic components are not incidental. QAnon may have started in 2017, but its ideology resonates with much older anti-Semitic conspiracy theories, the modern American face of an age-old and very dangerous ideology.

The story begins at the tail end of the twelfth century, when Jewish communities in the Rhineland were slaughtered by marauding crusaders. Their position worsened during the 13th century, and then took a catastrophic turn during the 14th century when the Bubonic plague pandemic raged across Europe.

Jews were accused of spreading the Black Death in a plot to overthrow Christian civilization. Violent persecutions followed in the plague’s wake, especially in Germany, where thousands of this already marginal group were burned to death and whole communities snuffed out of existence.

During these centuries, Jews were increasingly demonized and thought to be literally in league with Satan. As historian Norman Cohn writes, “however helpless individual Jews might seem, Jewry possessed limitless powers for evil. And already then, there was talk of a secret Jewish government — a council of rabbis located in Moslem Spain, which was supposed to be directing an underground war against Christendom.”

Jews, it was said, ritually sacrificed and cannibalized Christian children, draining them of their blood which they then mixed with matzoh dough for the Passover meal.

By the 19th century, these narrative strands had been woven together into the theory that a secret cabal of Jews — the “Elders of Zion” — controlled the fate of nations. This theory found its most toxic expression in a notorious book, the “Protocols of the Elders of Zion,” first published in 1903. The Protocols purported to be the record of a meeting of the Jewish “deep state,” at which they discussed their plans for world domination.

A few decades later, Nazi ideology breathed new life into these tropes. The demonic Jew was reborn as the Untermensch, the subhuman adversary of German civilization. Jews were represented as inherently depraved, and their depravity included a penchant for pedophilia. An illustration from the Nazi children’s book “The Poison Mushroom” shows a grotesque and menacing Jewish man offering candy to two blond youngsters, Hans and Elsa; the book explains that the Jewish character has been offering Elsa sweets, inviting her to come along with him, and not to tell her parents, and concludes with a ditty describing Jews as Satanic child abusers: “A devil goes through the land/ The Jew he is, known to us all /As murderer of the peoples and polluter of the races/The terror of children in every country!”

Jewish ritual murder, too, played a large role in Nazi propaganda. Julius Streicher, the editor of the influential gutter-press newspaper Der Stürmer, devoted a special issue to it in 1934. Hitler had it suppressed after an international outcry, but Streicher insisted that the outcry proved that international Jewry would stop at nothing to conceal their murderous and cannibalistic practices from the gentile world.

Hitler described Jews metaphorically as blood-sucking creatures, and often spoke of them draining blood from the German Volk. Others followed suite. For instance, political theorist Carl Schmitt drew on images of ritual murder and cannibalism when he wrote in 1938 that “the Jews stand by and watch how the people of the world kill one another. This mutual ‘ritual slaughter and massacre’ is for them lawful and ‘kosher,’ and they therefore eat the flesh of the slaughtered peoples and are sustained by it.”

You can hear the echoes of QAnon in all of this. QAnon may seem to be merely a bizarre, even laughable, delusion. But history shows us that there are circumstances in which groups with such beliefs can move from the margins of political culture to its center, where they have devastating consequences.

Consider the Nazis, who began as one of many right-wing fringe groups, with bizarre, quasi-delusional beliefs. But a sequence of catastrophes gave them real political traction: defeat and humiliation on the world stage, a devastating pandemic, and violent political clashes on the streets of Germany’s cities. Escalating liberalism and secularization created anxiety among many ordinary Germans, and the post-war financial crisis, followed by the Great Depression, exacerbated their sense of helplessness. They saw their world slipping away, and they longed to have a glorious past —however mythical — back again.

Do these conditions have any significant echo in Trump’s America? I think that they do.

Consider the disturbing fact that President Trump refused to distance himself from the QAnon zealots, that he retweets their messages, and that he has recently said that mysterious “people in the dark shadows” are controlling his rival Joe Biden. And a QAnon believer won a Georgia primary, all but ensuring her a seat in Congress.

QAnon is not a joke. QAnon is dangerous.

You might respond that that although it certainly contains some anti-Semitic elements, it is not an anti-Semitic movement per se. But that would miss the point. It’s close enough.

David Livingstone Smith is the author of “On Inhumanity: Dehumanization and How to Resist It.”