Do not let Gretchen Whitmer become the next Rabin 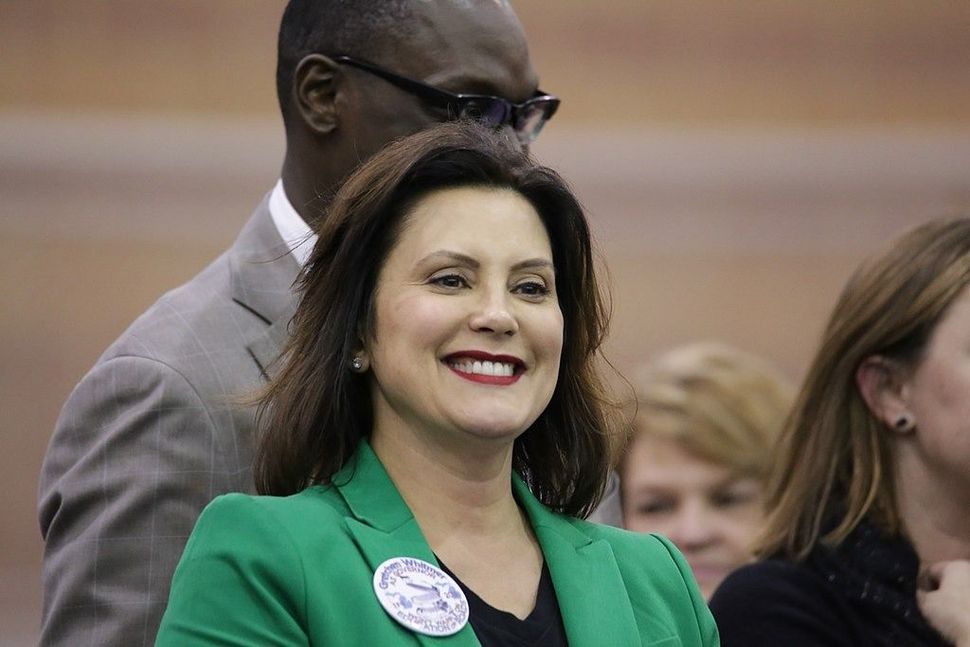 Gretchen Whitmer at a campaign rally in Southfield, Michigan on Friday, November 2, 2018 Image by Wikimedia Commons

On Nov. 4, we will commemorate the 25th anniversary of the tragic assassination of Israeli Prime Minister Yitzhak Rabin. Rabin’s transformation from hard-nosed military leader to peacemaking premier culminated first in the Oslo Peace Accords — and then in his own demise.

That the historic effort to end the conflict between Israeli Jews and Palestinians polarized Israeli society is not surprising; peace is hardly ever made by unanimous consent. What remains disturbing is that Rabin’s assassin — an Israeli ultranationalist — sought to resolve his political dispute with the government by ending the life of the prime minister.

Some believe the State of Israel never recovered from this unspeakable breach of its democratic order, and that the political violence of 1995 remains coded in Israel’s political DNA. If any testament exists to support this theory, it is that Benjamin Netanyahu, the leader of the parliamentary opposition at the time, is now the state’s longest-serving prime minister.

Many Israelis blame Netanyahu for his role a quarter-century ago in inciting extremists in his Likud party against Rabin. They point to Netanyahu accusing the sitting prime minister of treason, speaking at rallies in which right-wing activists carried effigies of Rabin dressed in Nazi uniform, chanting “by blood and fire, we will expel Rabin,” and speaking Evita-like from a balcony to a massive anti-Oslo rally in Jerusalem beneath a banner reading “Death to Arafat.”

Of course, Netanyahu has always condemned Rabin’s murder and maintained ignorance of the most extreme rhetoric of his supporters in 1995. But Netanyahu was made aware of credible threats to Rabin’s life on several occasions, yet still refused to modulate his rhetoric or call for calm among his supporters.

The lesson of Rabin’s assassination is in the responsibility of political leaders to shape public discourse in a manner that can advance their political goals without delegitimizing their opponents or harming democracy. Unfortunately, this lesson remains as relevant today as it was in 1995.

Rabin’s murder was all I could think of on Friday when I heard about the foiled plot of a domestic terrorist gang to overthrow Michigan’s government, storm our state capitol, and abduct and assassinate our governor, Gretchen Whitmer. The revelation of this plot illustrates a growing phenomenon in Michigan and across the country whereby extremists have given up on resolving political disputes at the ballot box, turning instead to extra-democratic, violent means.

As with Rabin’s assassination, the plot against Whitmer, a Democrat duly elected in 2018, is the natural consequence of months of incendiary rhetoric emanating from the right-wing in Michigan. Since the COVID-19 pandemic began, Republicans in Michigan opposed to Whitmer’s measures to contain the virus have used their platforms to draw battle lines against her and her Democratic Party so stark and existential, that for many listening, the only answer was blood.

Much ink has been spilled on the role of the President of the United States in inciting this type of violence; Trump’s calls to “LIBERATE MICHIGAN!,” or to tell white supremacist groups like the Proud Boys to “stand back and stand by,” and his continued racist, anti-Semitic, and conspiratorial rhetoric have certainly compounded a volatile political atmosphere.

But looking closer to home illuminates an entire raft of less-obvious accomplices to the Whitmer plot.

When protesters and militia members — including some of those indicted Friday for plotting to abduct Whitmer — stormed Michigan’s capitol armed with semi-automatic rifles, Mike Shirkey, the Majority Leader of the Michigan Senate, held a casual chat with them about the Senate’s legislative priorities.

After Jewish Democrats called on Shirkey to denounce comparisons between Whitmer and Hitler, he spoke at a Grand Rapids rally (attended by at least one of the indicted terrorists) in which attendees carried signs and placards declaring just that.

During a radio interview in April, Shirkey added fuel to the fire, stating, that Whitmer had “made it clear” that she is “comfortable being a dictator.” And on Friday, even after news broke of the foiled plot to kill the governor, Shirkey rallied “Michigan Patriots” on the Capitol steps stating, “We need to be strong” and “ not be afraid of those who are taking our freedoms away from us.”

These are the words of an insidious demagogue. Like Netanyahu 25 years before, Shirkey has continued to play footsie with violent extremists, endangering the life of Governor Whitmer, and countless other Michiganders.

Jewish theology is a complicated animal — leading Jewish thinkers can have totally different takes. Listen to Forward contributer Abigail Pogrebin discuss the complexities of God with Yehuda Kurtzer on his podcast here.

Whitmer herself has spoken about this, saying she had asked Republican leaders in the state to “bring the heat down.”

“I was aware of many of the threats made to me and my family and I asked for their help,” she said. “And they didn’t do a darn thing about it.”

A significant portion of far-right attacks against Whitmer during the pandemic have relied on a bastardization of Jewish history. In addition to the preposterous allusions to Hitler, one Republican state representative likened coronavirus contact-tracing to the yellow stars foisted upon Jews by the Nazis, and a barber in rural Michigan became a GOP cause célèbre for equating his plight fighting the government’s order closing barber shops to “Jews placed into cattle cars.”

One does not have to read an ADL report to know that anti-Semitic and extremist rhetoric and incidents have skyrocketed in Michigan over the past several years. In my role as chair of the Michigan Democratic Jewish Caucus, I have tracked these incidents, and witnessed the increasingly palpable sense of insecurity Jews across the state feel.

History demonstrates that whenever political violence becomes the norm, Jews and other minority groups are often among the first casualties.

Recently, I have wondered about the future of the organization I lead, the Michigan Democratic Jewish Caucus, in a post-Trump America. Absent a rabidly anti-Semitic president who poses an existential threat to Jews, will there be enough to work on?

The revelation of the plot against Governor Whitmer and the anniversary of Yitzhak Rabin’s assassination reminded me how naive that quesion was: as long as demagogic politicians in Michigan — and across the country — are willing to step beyond the edge of responsible rhetoric and actively incite, or merely turn a blind eye to, extremism and violence among their supporters, there will be plenty to do.

Jews in Michigan — and across America — must be the tip of the spear against white supremacy, extremism, and domestic terrorism. We will not let Gretchen Whitmer become the next Yitzhak Rabin.

Noah Arbit is the founder and chair of the Michigan Democratic Jewish Caucus.

Do not let Gretchen Whitmer become the next Rabin