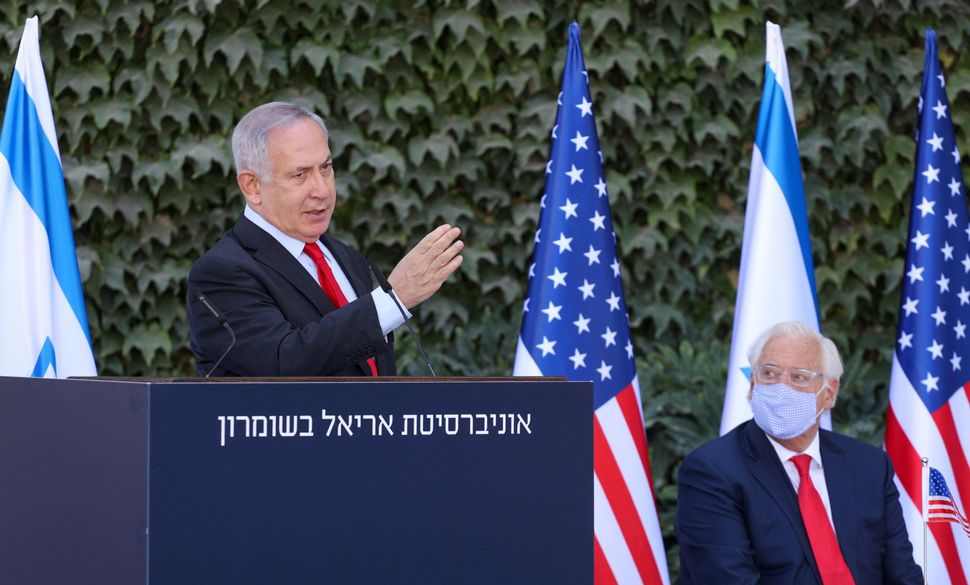 Last year, the U.S. State Department reversed its decades-old finding that Israeli settlements in territories occupied following the 1967 war were in contravention of international law. In so doing, the Trump administration overturned the consensus view of mainstream international law scholars.

Now the administration has moved from word to deed: On Wednesday, Prime Minister Benjamin Netanyahu and the U.S. Ambassador to Israel appeared in the West Bank settlement of Ariel to expand a scientific research cooperation agreement to include the occupied territories. It was a scene unimaginable not so long ago.

Prime Minister Benjamin Netanyahu and US Ambassador to Israel David Friedman signed an extension of the Israel-US scientific cooperation agreement which will now apply to Judea and Samaria, and the Golan Heights

The political and foreign policy consequences of this act will play out over years to come. As far as the American political scene is concerned, it solidifies an apparently inexorable trend: the decline of a bipartisan consensus on Israel. It is now harder to imagine a middle point at which conservative Republicans and liberal Democrats can meet on Israel.

American Jewish leaders committed to nonpartisanship will find themselves confronted with tense political dramas over Israel. In the end, it may be better to acknowledge that the era of bipartisan support is gone rather than keep it on life support.

When discussing fraying bipartisan support for Israel, the usual focus is on the progressive wing of the Democratic Party that has been growing vocal in its support for Palestinian rights. In this picture, there is still plenty of room for bipartisan cooperation between moderates, conservatives, and even some progressives. Military aid for Israel, for instance, is still a bipartisan consensus issue.

But Wednesday’s decision by the Trump administration cuts across internal divides in the opposition party. There are few if any elected national Democrats who believe U.S. cooperation with Israel should extend to the settlements. Even among Israel’s staunchest supporters in the party, the settlements are seen as at least unhelpful, though more often deleterious, to the cause of the two-state solution.

Regardless of the outcome of next week’s election, and whether or not a President Biden reverses or merely ceases the expansion of this type of cooperation, expectations have been set. Republicans, buoyed by Jewish conservatives and Evangelical enthusiasts for Greater Israel, will probably not back down on the standard set today by Ambassador David Friedman, a lifelong opponent of the two-state solution. Support for Israel means support for Israel in all of the land.

Correspondingly, Democrats are increasingly not keen on the settlements. Even if we allow for pro-Palestinian progressives to be a relatively weak minority in the party for many years to come, they will still far outnumber the Democrats who don’t believe the settlements are a threat to Israel’s future as a Jewish and democratic state.

The moderate position in the party resembles that of its presidential nominee who, while certainly more sympathetic to Israel than progressives, is unafraid to be as frank as the party’s left when it comes to the dangers of the settlements. A reevaluation of the settlements in the Democratic Party that concludes even slightly in their favor is simply the stuff of fantasy.

The demise of the bipartisan model, popularized by AIPAC and mainstream American Jewish organizations, will be mainly a result of constituent lobbying on the Republican side. The Trump years have bequeathed a lengthy record of taboos broken: American recognition of Jerusalem as Israel’s capital, moving the U.S. Embassy to Jerusalem, recognizing the Golan Heights as Israel, changing the State Department position on settlements, and now American investment in the settlement enterprise. Anyone who believes the sectors of the Republican Party that care about Israel will settle for less in the name of bipartisan comity has not been paying attention.

I have noticed a tendency among some pro-Israel supporters of Biden to say that he will act to restore Israel as a bipartisan issue, or at least make it less partisan than it has become. Some of this may be a typical campaign exaggeration of their candidate’s ability to bring people together. But wittingly or not, the sentiment also presupposes there is something one party — the Democrats — can do to bring about this outcome.

But the Democrats are not the only party that has undergone an ideological debate about Israel. In fact, they have moved from their traditional positions the least compared to the Republicans, whose president and policy elites are embracing the policy priorities of the settlers.

Forget the progressives: This is not something Joe Biden can get behind.