Jewish teen groups are rife with toxic sexual culture. It’s on us to fix that. 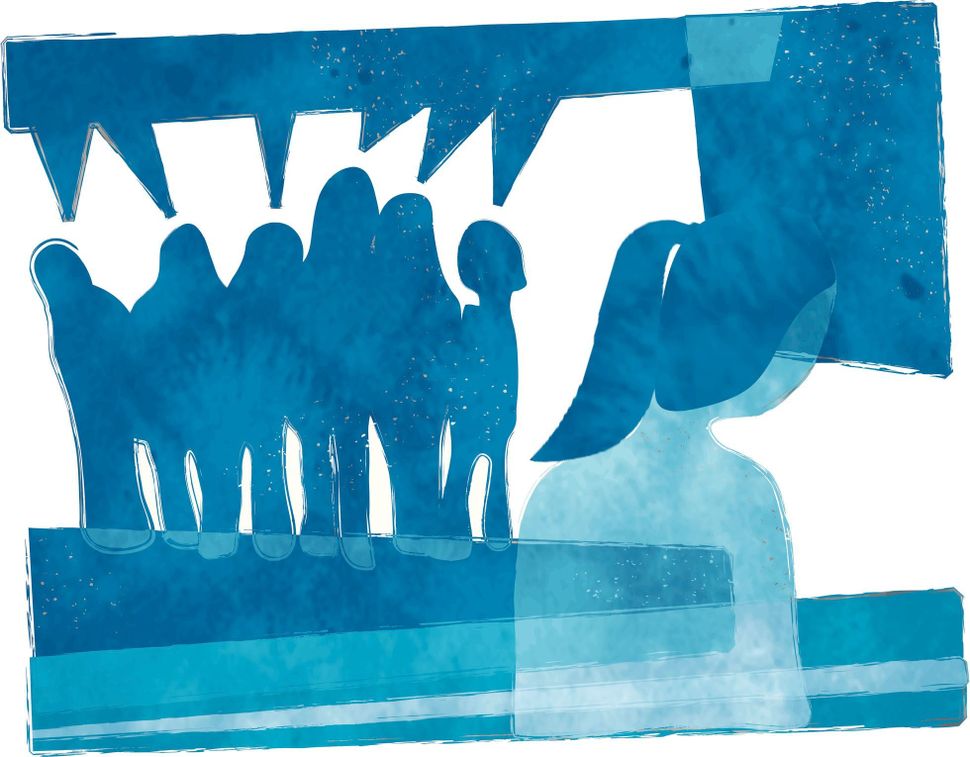 As someone long involved with Jewish youth groups, Shira Wolkenfeld’s recent “New Voices” investigation on the toxic sexual culture that exists within many of them was difficult to read.

In the extensive article, Wolkenfeld documents incidents of groping during convention Shabbat dinners, over-sexualization, pressures to hookup and sexual assault. I struggled to reconcile this portrait with the extraordinarily positive — and clearly privileged — experiences I had.

My children were BBYO leaders and their participation helped cement their commitment to Jewish values and community. My own memories of being a teen in United Synagogue Youth are among my happiest and most formative — from serving as president of my Kadima chapter to attending regional conventions at the Jersey shore.

Even back in the 1980s, there were boys and crushes and make-out sessions. But I always found these gatherings to be safe spaces. It was deeply troublesome to read how many teens did not have the same experience.

Jewish Women International, where I serve as CEO, has been working with USY and BBYO for years. In the last 12 years, we developed a comprehensive guide on developing healthy relationships; a program to help parents prevent and spot teen dating abuse; a campaign against domestic and sexual violence replete with resources; programs to help BBYO chapters and teens learn how to set and respect boundaries. From the Jewish Coalition Against Domestic Abuse to Shalom Task Force to Moving Traditions to Shalom Bayit and to The Advot Project, Jewish organizations are working to engage teens and provide critical prevention programming.

And yet it seems like all of these efforts haven’t been enough. As much as we and the youth groups have tried, these programs and initiatives never truly embedded themselves into the culture. They were, at best, Band-Aids — one-off workshops that spoke too infrequently to too few teens.

So what more should we do?

Wolkenfeld positions the sexually charged environment as an outgrowth of an obsession with Jewish “continuity” — creating spaces that bring Jewish young people together and encourage them to meet, hook up and one day marry and have Jewish children.

Earlier reporting seems to confirm this. Sarah Seltzer’s 2018 “Jewish Currents” piece on hookup culture on Birthright trips quotes musician Jack Antonoff describing his experience on a Jewish teen tour, joking that other faiths say “Don’t touch,” but that “Jews say, ‘Touch, but with a Jew, ‘cause if you don’t…the race will die!’”

It doesn’t get better after college: young women often tell me that they feel most Jewish young professional events are “meat markets,” where the unspoken purpose is to leave with a partner. Often it is only when they attend events exclusively for those who identify as women or gender nonbinary that they are free to focus on themselves and their own personal growth — free from feeling like they have to navigate a sexually charged environment in which they are commodified.

We can draw a straight line from what’s happening in youth groups to the #MeToo stories from Jewish workplaces and communal spaces. As detailed in a comprehensive 2019 report on survivor experiences in Jewish workplaces and communal spaces, the lack of safety and respect plays out in a range of abusive behaviors — from sexist jokes to assault and rape.

At the heart of the issue are “power imbalances, the structure of Jewish institutions, and Jewish views and treatments of gender.” As a result, too many women are opting out, leaving the Jewish communal workforce for positions in the secular world — leaving a community they see as unsafe and in which they are undervalued.

The most devastating part of this is how our community often protects the powerful, even if they are perpetrators. I’ve heard from Jewish domestic violence survivors, who shared how their abusers were still held in esteem in the Jewish community because they were “machers.” Wolkenfeld’s investigation demonstrated that this happens in youth contexts, as well, documenting the story of a young man who has been accused of sexual assault on multiple occasions, yet still is allowed to attend events and, worse still, holds a leadership position.

As one young woman noted in the Wolkenfeld piece, this unsafe culture is rooted in “the ingrained idea of entitlement.” She shared, “[There’s an] idea of I see you and I like you and I’m entitled to you.”

This is the danger of an unchecked toxic sexual culture. We are teaching our teens, whether overtly or subtly, who has power — and then connecting that power to sexual entitlement. When we don’t change the culture in youth groups, the toxic behavior continues and escalates. This is the pipeline — from youth group to college sexual assault to workplace harassment to domestic violence.

Wolkenfeld writes that “alumni of youth groups are serving as synagogue presidents and running Jewish organizations.” If our youth groups are training grounds for Jewish communal leadership, how do we ensure they are safe, supportive, inclusive and nurturing Jewish spaces? How do we teach and model a culture of consent and respect? How can adults demonstrate boundary setting, healthy relationships and open communication? What cultural transformations and organizational shifts are needed to prevent sexual and domestic violence within the Jewish community?

Herein lies a tremendous opportunity. I’ve met the young people who gravitate to our youth groups and they are among our best and brightest. We have them at a time when they are learning to understand relationships and navigate sexuality, all while bravely taking on their first leadership roles in the Jewish community. If we build a culture of respect and safety, we change future leadership to be one that supports survivors, that values women and girls, that ends violence.

If toxic hookup culture was in any way enhanced by funding priorities of “Jewish continuity” and the “drive for Jewish babies,” then perhaps we should begin by calling on Jewish philanthropists to make a serious commitment to invest in organizations and projects working to end the toxic sexual culture.

Philanthropic support for women’s and girls’ organizations represents just 1.6% of overall charitable giving and these same philanthropic trends are often mirrored in Jewish philanthropic giving. Organizations working to support survivors and build a culture of respect in Jewish communities struggle to find consistent funding. Things will not change unless the funding changes. We need additional investment to create the community we envision and that our children deserve.

The responsibility should not fall on our youth to address the culture and climate of youth serving organizations. It is our responsibility as Jewish professionals and investors to make certain that Jewish experiences are safe and supportive.

I honor the work and writings and voices of the young activists and journalists, but it should not be on them to open our eyes. They have the right to expect that we know better, that we will guide them and that they will be safe in the environments we build for them to learn to love and be in community with each other.

Culture change takes more than a policy, white paper, or workshop. It takes a comprehensive approach in which everyone, from the chapter advisor to the donor, truly believes in treating one another with value and dignity. It takes chapter advisors trained in consent and bystander intervention while they themselves model healthy relationships. It takes parents understanding how to spot red flags if their teens are in unhealthy relationships and knowing how to help. And it takes staff and lay leadership and donors committing to change until it is part of the breath of the organization.

We are failing them. It’s time for change.

Meredith Jacobs is the CEO of Jewish Women International (JWI), the leading Jewish organization working to address violence against women and girls. Ariella Neckritz, JWI’s senior manager of programs and training, contributed to the writing and research of this opinion piece.

Jewish teen groups are rife with toxic sexual culture. It’s on us to fix that.