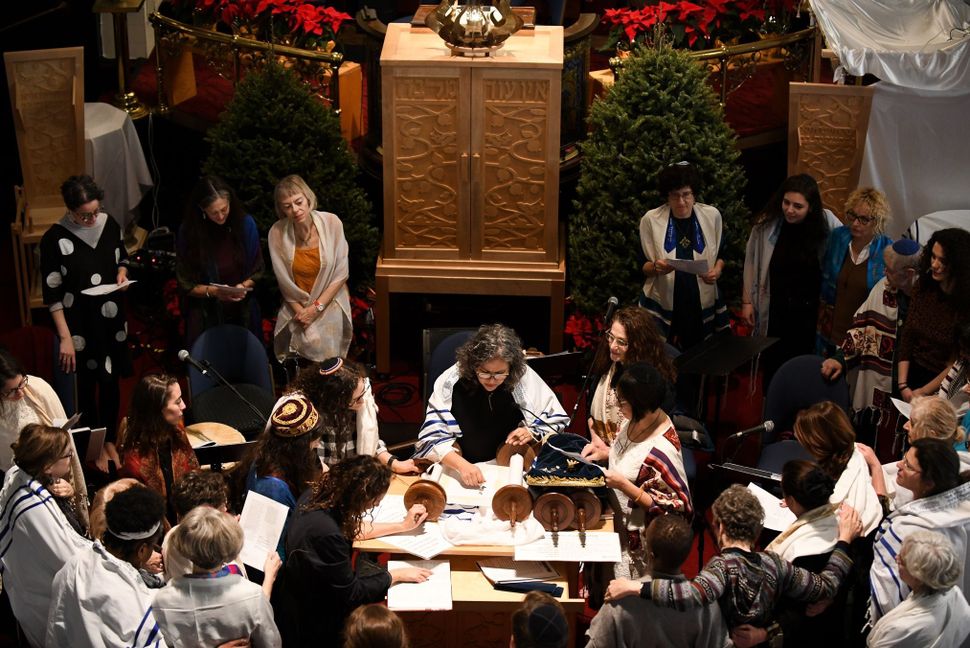 A Kohenet, Hebrew for Priestess, reading of Toratah at Romemu in New York. Photo by Gili Getz

Five years ago, I started rewriting the Torah by reversing the genders of all characters. All of the men became women and all of the women became men. Divine influence was now moving through a mother-daughter lineage.

Why would I do such a massive act of chutzpah?

I’m an Israeli-American artist. In my art practice, I’ve been exploring the relationship between language and form. After ten years of studying Kabbalah in the tradition of Baal Hasulam, a hasidic rabbi and kabbalist, I reached a spiritual impasse. I needed a sacred text that codified women’s experience in relation to the Divine, but I couldn’t find one. Our sacred books were all written from a man’s point of view.

So there I was, seated on the couch, in my PJs, with my laptop. It was quiet around me, and I typed away. After the first few verses, I looked up at the ceiling — it didn’t fall. The room hasn’t changed a bit. I continued, typing delightfully how Goddess created the world, until I reached Bereshit verses 26-27: “Let us make an Eve in our likeness, after our image; And Goddess created Eve in Her likeness. In the likeness of Goddess, She created her.”

For the first time in my life, I heard these words in full color. I felt that this ancient story was speaking to me directly, and giving me agency that I never felt before. For the first time, I met Goddess through my inner image, as I could so easily identify with Eve.

What else did the Torah hide from me?

I wanted to find out. About three years and a pandemic later, I bid farewell to Moshah as she stood on Mt. Nevoa — an extraordinary woman whose “eye was not dim, and whose sap had not run.” The first draft of Chumash Toratah was complete.

During this period, profound things happened. I started to experience the text in community and witnessed how it resonated with others. For the first time, during Shavuot learning at the 14th Street Y, a female rabbi chanted from a page of Toratah written by a female scribe.

In November 2019, we held the first ritual with Toratah, chanting the story of the Akeda, the binding of Isaac, alternating the verses between the traditional and our newly written version: “Titzhak spoke to Emrahama, her mother, and said, ‘My mother.’ And she said, ‘Here I am, my daughter.’”

Tears came. Glasses fogged. Voices broke. A rabbi spoke to me quietly while she was tying the makeshift scroll we had prepared for the occasion: “I promise you that we will tie a real Toratah scroll.”

A few months later, I had another opportunity to chant from the Toratah during Shabbat Miketz: “And Par’ah said to Toseph…I have heard that when you hear a dream, you can solve it.”

After the service, Kohanot (Hebrew for Priestesses) from the Kohenet Institute surrounded me with their blessings. The power of their voices and intentions is still with me.

Tamar Biala joined me to work on the second draft of our regendered Chumash. Her experience growing up religious in Israel and her groundbreaking editing of “Dirshuni, Israeli Women Writing Midrash” have brought valuable breadth to this sacred work.

Our conversations took us deeper into biology, Near East mythologies, languages, regional ancient legal systems and archeology. We created words and conjugated new verbs for female form when they were missing from the Hebrew language. We discovered in this process how multilingual and multicultural our Torah really is — how vowelization, introduced in the 8th century, was also its own form of commentary. We connected more deeply to what we know language to be — fluid and malleable.

Just over a year ago, we started a virtual weekly mincha service in which we read the weekly portions from our Toratah. An extraordinary collection of people — artists, scholars, teachers, rabbis and ritual experts from the US, England and Israel — have gathered for the weekly studies and discussions.

Toratah has challenged us in new ways: The agency that the women of Toratah have for good or bad, and their larger-than-life personas tested our feminist theolgies and feminist ethics. Toratah called on us to redraw our definition of woman in relation to a Goddess who shows Herself as a maximum woman, while men gain their social standing by fathering daughters.

We also saw that the original text and our version come together to create a complete Torah, and possiblities for gender-queer readings opened up when crossing stories from both sides: Emrahama and Sarah, the founders of the Tisraelah people, could not conceive but they had a slave named Hager. Torah has become dynamic.

After Simchat Toratah and the unveil of Chumash Bereshit in Hebrew, Tamar and I will start a new study series three Sundays per month teaching Toratah Bereshit comprehensively, and once a month, we will hold a Shabbat service to study the Haftarah from Prophetesses.

While doing this work, I encountered a verse that blew my mind and answered so deeply that which I yearned for: “And Tehovah spoke to Moshah face to face, as a woman speaks to her girlfriend.” (Toratah, Exodus 33:11).

If someone would have told me years ago, Yael, this is what you will be doing with years of your life, I would have replied that they are totally mad. But hineni, here I am. Goddess moves in mysterious ways.

Yael Kanarek is an award-winning multimedia artist. In 2016, she began an initiative to regender the Tanakh (Hebrew Bible), by reversing the genders of all characters. More information about this project is available at Beit Toratah.