How do you sum up 500 years of Sephardic history in just a couple of illustrations? That’s the challenge I had to answer in the pages of the Forward and on the web at forward.com.

Josh Nathan-Kazis’ story tells about his attempt to make good on the Spanish government’s offer to issue passports to Jews of Sephardic (Spanish) origin. It was a substantial piece, and the Forward had decided to present it in two weekly installments in the print edition.

It was my job as art director to make that happen — and soon.

We had plenty of photos Josh had taken during his travels in Spain. But we needed a main image to anchor the piece on the front page of the Arts section each week. None of the photos really expressed the overarching ideas of the story. Deputy culture editor Naomi Zeveloff suggested “maybe an illustration with Josh in the foreground and Spanish architecture/trains in the background.”

That launched the idea of having illustrations using Josh as a character in the illustration, which is a bit light and whimsical, inasmuch as it fictionalizes the author a bit; you wouldn’t do that for a hard news story. But arts and culture editor Adam Langer felt that was the right idea though — while there are serious aspects to Josh’s piece, cultural and political, the piece itself is first person and written with a tone that bends towards the satirical. Josh suggested that perhaps he should be in Madrid, but in the background we see the garbage that filled the streets while he was there during a strike.

I suggested that Josh should be Don Quixote. For Americans it’s on a short list of familiar things Spanish. The rest of the list would be bull fighting and castanets. But it seemed appropriate — Josh’s piece is all about coming to Spain with noble illusions that prove to be absurd. I suggested Quixote on a rearing horse in lower Manhattan (where the Forward is located) and an Atlantic Ocean, truncated à la Saul Steinberg, to show nearby Spain.

Josh and Adam thought I should run with the idea. While making a pencil rendering, I turned Don Quixote’s lance into a yad, highlighting the Jewish nature of Josh’s “quest.” Having Josh’s horse set out from lower Manhattan gave me an opportunity to draw the new World Trade Center tower.

I inked the drawing on tracing paper. I thought Don Quixote called for some engraving-like lifework. so I rendered the drawing in pen and ink.

I scanned the ink drawing and colored it in Photoshop.

The second installment of Josh’s piece fleshes out the ideas established in the first half. Early proposals were that we show Josh on his horse returning, defeated. Perhaps, I thought, something like the defeated Indian in “End of the Trail.”

But Josh knew that he was doing the whole thing partly as a lark, partly to report a story and with very little expectation that he’d really get a Spanish passport. Somehow it seemed a bit maudlin to present him as defeated. He loses some illusions about his family, but the overarching feeling of the second half is that there’s this absurd charade going on in Spain. Jewish neighborhoods that are being cultivated as tourist destinations have virtually not a thing left in them from when Jews inhabited them. The Spanish passport offer comes to seem like some kind of P.R. stunt. Spain would like to be known as a place that is friendly to Jews, belatedly trying to mitigate the damage done when Queen Isabella banned Jews from Spain in 1492. Perhaps there’s a moral or commendable element to the impulse, but Josh’s piece brings out what is at best wishfulness and at worst hucksterism.

I imagined a translucent apparition of Queen Isabella, enticing our reporter with an immaterial, unattainable passport. I decided to pattern the landscape after El Greco’s famous landscape of Toledo, a city that figures in Josh’s narrative. While describing the idea to Josh and Adam, I did this quick sketch showing Isabel in the sky in a throne, with an “apologetic look.”

I realized that the only think I really cared about with Queen Isabella was her crown, so I lost the throne and lost her body to the ether. It wasn’t till I tried to pastiche El Greco’s “View of Toledo” that I realized just how detailed it was.

The drawing was pleasing enough as a drawing. But its meaning might not be clear. One thing that seemed easy to fix was to make sure people at least knew who the monarch in the sky was. One editor had proposed having the Nina, Pinta and Santa Maria sailing away in the distance — people associate them with Isabella. That might have been good, but it would have involved adding an ocean and a bunch of boats — too much stuff, too distracting. On the other hand, the idea of adding a label to Queen Isabella seemed fairly simple. 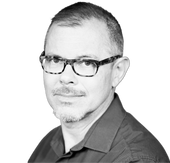 Kurt Hoffman joined the Forward as art director in 1997. Previously, he worked as a freelance graphic designer and illustrator. He did graphic production work at Rolling Stone and Us magazine, and specialized in electronic illustration for academic textbooks at Function Thru Form, a desktop publishing company. He has a BFA in Fine Arts from Cooper Union. In 2010, some of his drawings were shown at the Ludwig Museum in Cologne. Kurt Hoffman also plays and composes music for various projects, currently for the group Les Chauds Lapins, whose 2011 album, “Amourettes” is available on Barbès Records. Kurt Hoffman can be reached at production@forward.com.