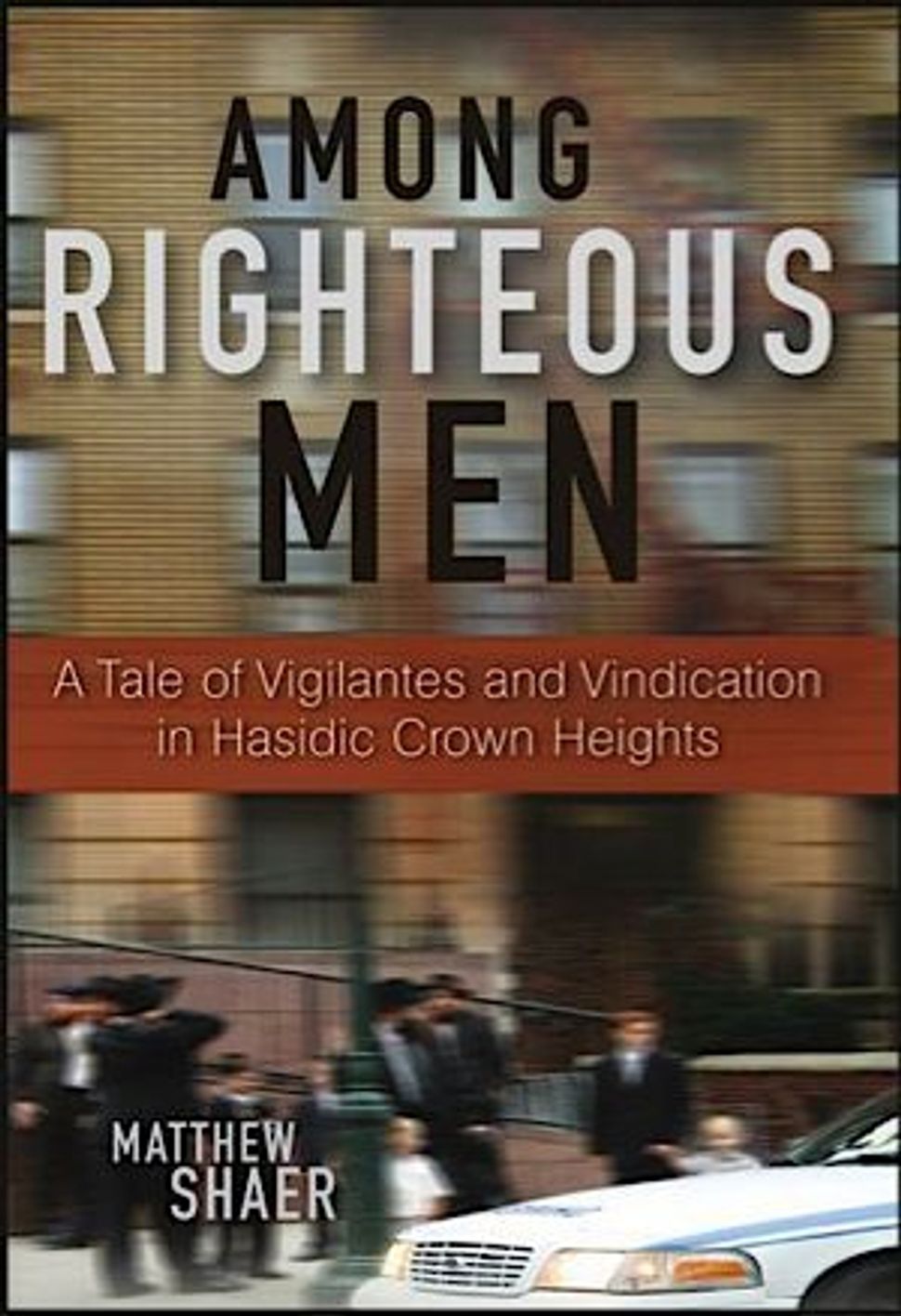 Matthew Shaer is the author of “Among Righteous Men: A Tale of Vigilantes and Vindication in Hasidic Crown Heights.” His blog posts are being featured this week on The Arty Semite courtesy of the Jewish Book Council and My Jewish Learning’s Author Blog Series. For more information on the series, please visit: 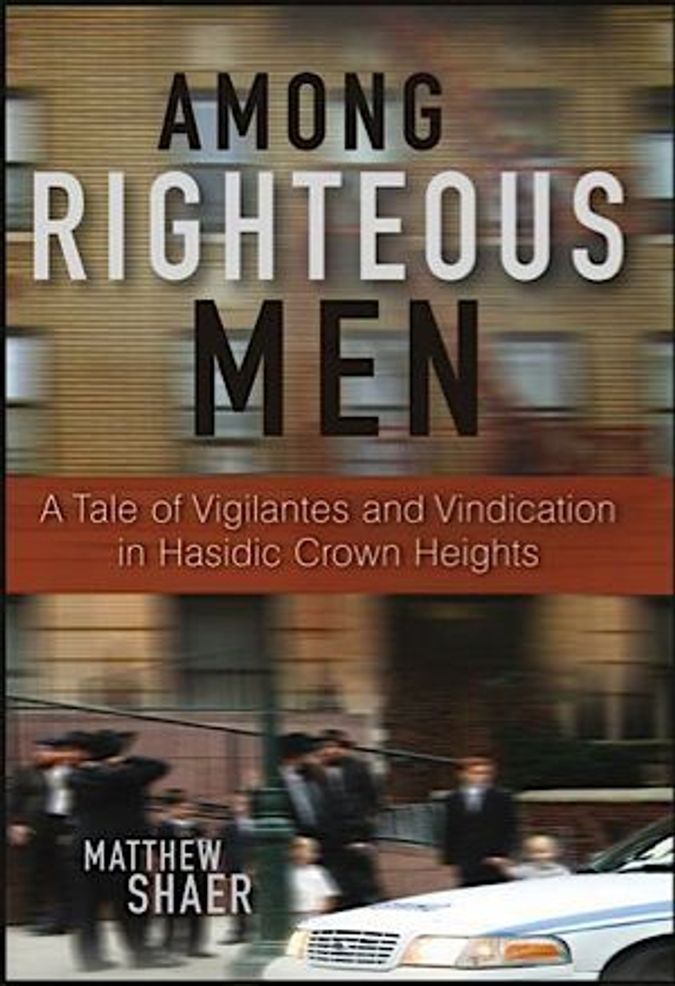 I did not set out to write a book about Jews.

In fact, I was warned repeatedly against it — by friends, acquaintances, publishing professionals. I remember an early phone call with a well-known editor at a publishing house in Manhattan, who told me, in no uncertain terms, that “people don’t buy Jewish-themed books.” He must have heard me collecting my breath on the other end of the line, because he quickly added: “Even Jews don’t buy books about Jews. And definitely not books about Hasidic Jews. Sorry.” Still, I considered what I stumbled across to be a good story, and I was loathe to take his advice.

In the spring of 2008, I had been dispatched by New York magazine to the Crown Heights neighborhood of Brooklyn, to interview the members of a Hasidic anti-crime patrol called the Shmira (“Watchers,” roughly, in Hebrew). For the most part, the Shmira were considered a relatively benign community presence — responsible for ferrying elderly women to the bus stop, or fixing flat tires, and so on — but that spring, a couple members of the group had allegedly set upon a black college student named Andrew Charles, and beat him around the back and arms with a night stick.

Fewer locales are more sensitive to the spectre of racial violence than Crown Heights, the site of three days of deadly rioting in 1991 — local Jews continue to call the event a “pogrom” — and within a week of the incident, the neighborhoods had taken on the appearance of what the Times termed a military camp. Police riot vans and mobile command posts were stationed on Kingston Avenue, the high street of the Jewish community; packs of uniformed cops worked west to east on Carroll and Empire, flashlights in hand. Local politicians, fearing the worst, issued public pleas for calm.

Accusations were thrown back and forth with increasing alacrity. The large African-American and Caribbean population blamed the Shmira for targeting black men. The leadership of the Chabad-Lubavitch movement, meanwhile, which had been headquartered in Crown Heights for decades, pointed to an uptick in violent crime, and claimed that the police had abdicated their duty. In that vacuum, the argument went, the Shmira were bound to act. In late April, I reached out to Yossi Stern, a Lubavitcher Hasid, and the spokesman for the Crown Heights Shmira. Stern was wary of the media attention, but when I asked if I could pay him a visit, he agreed, and invited me to his home on Union Street.

That evening, I walked from my apartment in Park Slope, down Eastern Parkway, and into Crown Heights. My only previous experience with the neighborhood consisted of momentary glimpses out of the window of a cab, as I hurtled out to the airport, in Jamaica, Queens — I remembered packs of black-hatted men, grand old apartment buildings, the sun-dappled and tree-lined footpath which runs down the southern lip of the Parkway. What I found was something very different; something deeply jarring.

I should say here that although I consider myself in many ways to be culturally Jewish, I am not observant nor particularly religious, and I spent much of my childhood attending Unitarian services with my mother, who was born into an old Unitarian family. And yet some of my earliest memories are of sitting on the floor of my great-grandmother’s apartment building in Newton, and listening to the circuitous clucking of Yiddish. My paternal grandmother spoke Yiddish sometimes, too, usually when she wanted to say something to my grandfather that the kids wouldn’t understand; even now, when reporting on Orthodox communities in New York, I am shocked at how much of the language I must have internalized.

I knew, vaguely, the story of my great-grandmother, Edith Rosenthal, whose father had been murdered by Cossacks before World War I. I knew that she fled Eastern Europe with her mother and brothers, and passed through Ellis Island, before settling outside of Boston, where my grandmother was raised. But I had never been able to visualize the world from which she had come — a Jewish shtetl — until I began the process of reporting the New York magazine article, and then the book.

Here in the midst of bustling Brooklyn was a small enclave — no more than six blocks by 10 — that seemed to operate by the codes and customs of a bygone era. Here was a world where Yiddish was the common language, where Hebrew adorned the storefront signage, where one could walk three steps from the haberdasher to the bagel maker and then on to the fishmonger, whose wares — wet, pink, scaly — were displayed on large beds of ice, behind densely-fogged glass. Initially, I found it all to be quite thrilling, and after my interview with Yossi Stern, I returned frequently to Crown Heights, although I had no new assignment in the area.

I read every book on Jewish Brooklyn I could get my hands on — I started with Henry Goldschmidt’s expert “Race and Religion Among the Chosen Peoples of Crown Heights,” and worked outward from there. Later, I read Martin Buber, Elie Wiesel, Gershom Scholem. I muddled through long religious services, staring at walls of complicated theological text no more discernible to me than kangi; when I grew weary, I’d peek up at the upper reaches of the shul, where the Lubavitch women, separated from the men by a heavy sheet of Plexiglas, davened in a room of their own.

I have lifted the following excerpt from a journal I kept during that time, when I was first beginning my research. I think the date was February of 2010— I had been invited by a Lubavitcher rabbi friend to attend services at his shul. At the end of services, the congregants, all young men, began to dance. I watched them for a moment, doing my best to make it clear that I did not particularly want to join, but eventually, I felt a heavy hand on my shoulder, and I was quite forcibly dragged into the midst of the melee:

Outward we whirled, in faster in faster circles, my yarmulke at one point slipping off my head. It was the closest I have been to pure joy in Crown Heights — the closest I got to understanding the neighborhood. It was also the closest I came to understanding the faith of the Hasidim. For if I had remained outside the circle, taciturn and grudging, I would never have allowed myself the emotional space to become involved. I would have shrugged it off. Inside the circle, though, pressed elbow to elbow with these grinning, happy men, I understood finally the importance of camaraderie — us against the outside world. It was a warm place to be.

A few weeks later, I walked out of a private residence and into the purple twilight, and caught a glimpse of a trio of Yeshiva students, skipping down Kingston, hand-in-hand. In the windows of the nearby apartment buildings, candles glowed. A line of men filtered through the front door of 770 Eastern Parkway, the headquarters of the Lubavitch movement, their heads hung, their eyes on the leather-bound books which they held out in front of them like beacons.

Not for the last time, I felt that some part of Crown Heights belonged to me. It was my history, the history that I shared with my grandmother, and my great-grandmother, and her father, who had died without ever setting foot in America. Or perhaps it is more accurate, in the end, to say that some part of that place was me, in a profound way that I did not yet understand.