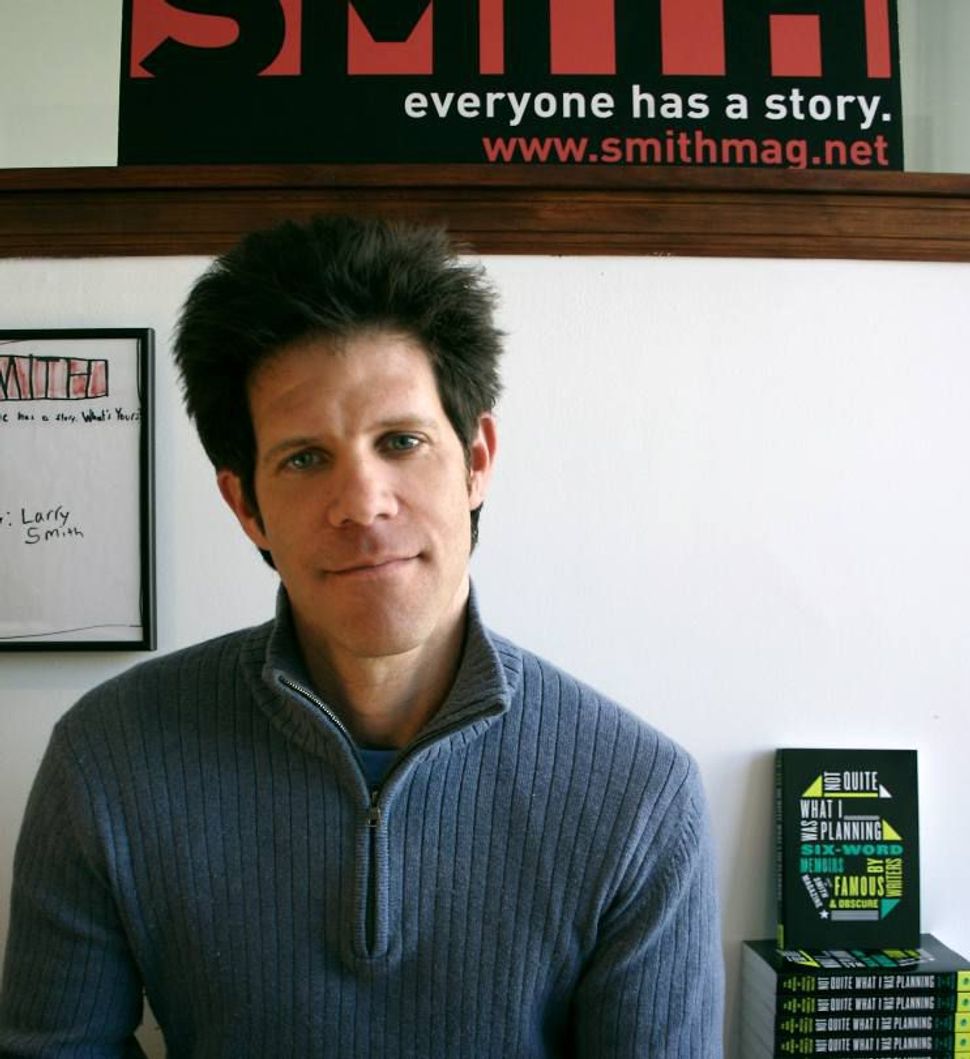 “Circumcision has been least challenging part.”

“God chose. Said no. Now what? 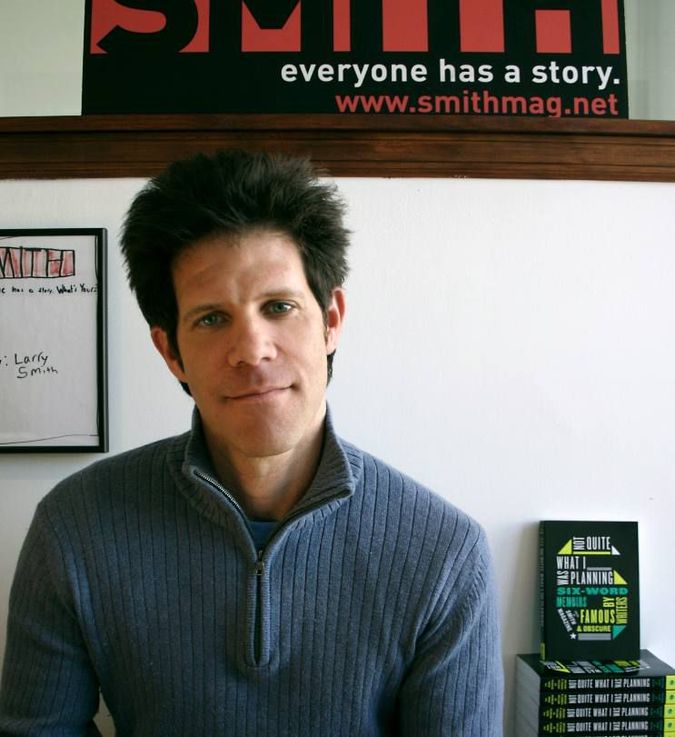 Millions of words, over thousands of years, have been written about the nature of the Jewish soul. But the most precise distillation of our people’s essence may have finally arrived in fewer characters than a tweet.

“Six Words on the Jewish Life,” a book to be published this week by the online magazine Smith, collects 360 nano-essays on “the wild, weird and wonderfully complex world of Judaism today,” according to editor Larry Smith, founder of the online “home for storytelling” that bears his name. The book is the latest in a series of popular six-word-memoir collections from Smith, including slim volumes on work, love and adolescence, and the first in which Smith tackles the faith of his fathers. (Full disclosure: My own six words, “Lapsed, cultural, and now professional Jew,” appear in the book.)

“I did a Jewish book first because I’m Jewish, and you go with what you know,” said the boisterous Smith, 43, over lunch near his office in Manhattan’s Union Square neighborhood. “But we’re also a people who love to discuss. And I thought the book would be an amazing catalyst for discussion. The book is 360 different ways of looking at Judaism. It’s a perspective that’s at once super-universal, but quite singular.”

The 360 entries in “Six Words on the Jewish Life” were culled from more than 2,500 entries solicited online, and “a lot of themes emerged, like nerves, anxiety, and never pleasing your mother. But we also saw a lot about faith and charity, service, and food,” Smith said. “Jews are really good at this — we’re smart, funny, literate. I don’t want to be offensive, but these are a higher quality than the rest of the site.”

Miniscule memoirs from machers like Jonathan Safran Foer (“Haggadah — most radical book there is”) and Larry David (“I should have had the chicken”) amp up the book’s Semitic star power. Smith’s own tongue-in-cheek entry: “Fourteen Rachels in my address book.” Not surprisingly, many submissions touched on tragedy. But sheer intensity of feeling ended up disqualifying most. “Hitler and Jews, Mom and me” did not make it into the book, Smith said. “I understand it’s someone’s story, and it’s true emotion. But it’s too much.” A German Jew’s submission, “Holocaust, Shmolocaust,” also got nixed.

Smith was working for “traditional magazines” like Men’s Journal and ESPN when he decided to strike out on his own with an eponymous “print/web hybrid” in 2006. He hired magazine design guru Robert Priest to design a prototype, the logo of which Smith still uses. After a fruitless search for backers, Smith pulled the trigger on Smith online, launching as an autobiography-based site with nearly no funding, an all-volunteer staff, and the tagline, “Everyone has a story. What’s yours?”

A few months later, when a planned video-blog project fell through, Smith launched Six-Word Memoirs — a moniker he has since trademarked — as “a last-minute stopgap,” he said. “We Googled ‘six-word memoirs.’ Nothing came up. So we launched the next day, and offered an iPod for the best one.” After a just-launched Twitter account broadcast the call for entries, he got flooded with thousands of submissions.

In the six years since, hundreds of thousands of people have sent in micro-memoirs. And Smith has, as they say, learned to monetize the platform in a big way. He’s published sponsored books for clients like global consulting behemoth Mercer. He’s become a sought-after motivational speaker who exhorts businesspeople to distill their brands to six words; a Shop-Rite sales conference in the Cayman Islands was a recent gig. Smith has even also spawned a board game and calendar.

For “Six Words on the Jewish Life,” he enlisted Reboot, the hipster-Jew network of self-described “thought leaders and tastemakers,” as a publishing partner, covering some of his costs. “We loved the 6 words project as far more than a book,” Roger Bennett, a Reboot founder and philanthropy executive, told the Forward in an email. “The process offers communities, organizations, and synagogues a powerful mechanism to engage their members in defining questions, values, and opinions in a way that range from the profound to the humorous.” The book’s also “great for interfaith couples,” said Smith, who lives with his wife, writer Piper Kerman (author of “Orange Is the New Black: My Year in a Women’s Prison”), and 14-month-old son Lukas in Brooklyn.

For the rest of the year, Smith will keep touring to promote “Six Words on the Jewish Life” as well as for his increasingly lucrative paid gigs. He’s also considering a Smith-inspired stage production he envisions as “Vagina Monologues meets Tony ‘n’ Tina’s Wedding.” Right now, he said, “it’s the first time in five years I don’t have a book due, and I’m delighted about that.” The black t-shirt he sports at lunch, one of nine he owns emblazoned with his own six-word memoirs, might best hint at Smith’s ethos: “Big hair, big heart, big hurry.”