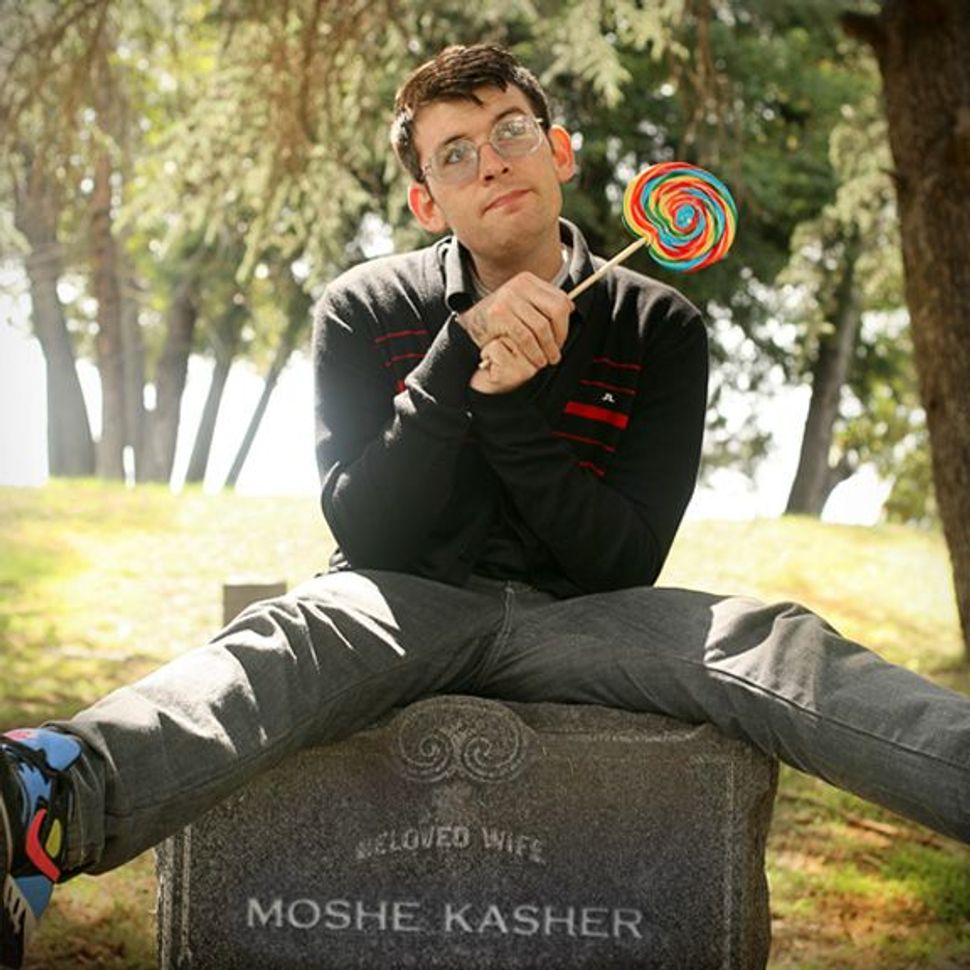 Moshe Kasher is the author of “Kasher in the Rye: The True Tale of a White Boy from Oakland Who Became a Drug Addict, Criminal, Mental Patient, and Then Turned 16.” His blog posts are being featured on The Arty Semite courtesy of the Jewish Book Council and My Jewish Learning’s Author Blog Series. For more information on the series, please visit: 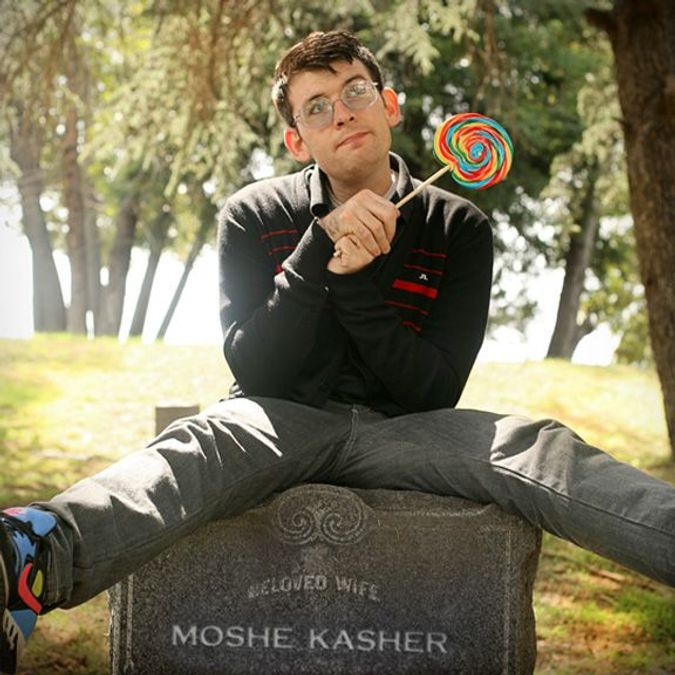 To whoever is reading:

I’ve had some complaints regarding my recent appearance on Conan, promoting my new book, “Kasher in the Rye: The True Tale of a White Boy from Oakland Who Became a Drug Addict, Criminal, Mental Patient, and Then Turned 16.” Some Jews (I’m assuming here) were a little offended by my poking fun at my experiences with childhood Haredi life. I said they looked like fat Amish penguins and that they were weird. But seriously, I mean is any of that in dispute?

Now, normally, I try and pay anonymous complaints no heed as I have long since come to terms with the fact that when you make jokes, especially sharp prickly ones, you will invariably bruise the tender sensibilities of someone and that the anonymous and instantly accessible nature of the Internet gives those bruised peaches an instant platform to lodge their grievances. But I’ve been thinking about it and I thought, since I’m being asked to blog for My Jewish Learning and the Jewish Book Council, that I might try and clarify myself and my jokes and my Jewishness.

I grew up in a bifurcated existence, floating between the supernatural realms of Hassidus and the concrete pragmatism of secularization. I’m an anomaly. A rare breed that is both “frum from birth” and “off the derech” in sharp strong veins that ran right next to one another, interweaving themselves into a confusing rope almost long enough to hang myself with.

My father moved to Seagate, and married into a Satmar family when it became clear that my mother — who took us on a “vacation” to Oakland early in my life — was not going to return. He was a unique man, a brilliant dynamo who painted and performed on the Lower East Side and according to family legend was asked by Marcel Marceau, seeing his pantomime genius, to join him as a “mime in training.” All the messy blurs of the art world were turned into sharp edges when he found Hassidus and returned to the shtark world of frumkeit.

My mother, who stole us away in the night, kept that mess and turned it into kindling for a bright jumbled fire that illuminated our home and kept us warm. Her relationship with Judaism was casual and ambivalent, no doubt poisoned a bit by her rocky marriage to my father.

I was born in the middle ground. To my left was modernism, to my right was minhag. The runoff of both experiences was churning whitewater that I had to learn how to paddle down, desperate to keep my head above water. Eventually, I learned how to make jokes about all of it and those jokes became flotation devices. They buoyed me and kept me breathing.

And though, if you read the book you will see how deeply and severely I sank later on, I used those jokes to keep me as afloat as I could be, even as I got smacked around on the rocks. “Kasher in the Rye” is a book where I expose my soft underbelly to the world and tell the tale of my teenage descent into drug addiction, violence, insanity and crime. But it’s a comedy. How can such dark fodder be funny?

If I hadn’t learned to laugh at it, all of it, it would have swallowed me whole and I’d probably not be your blogger this week. I’d likely be dead. So you’ll forgive me if I laugh at you. I’m really just laughing at myself. It never occurred to me that my childhood wasn’t my own to joke about. But I see now that, when bringing that childhood into the public for everyone to enjoy and hopefully to relate to, that I’m joking about your childhood too. If I offend anyone with my gallows humor, please know that I was born on a gallows and and I’m telling jokes to stave off execution. If you’d like to take my place up here you are welcome.

This isn’t an apology. God forbid. I’m not sorry at all for turning my experiences into jokes, it’s what I do. This is a clarification. I love Jews and Jewishness. I love Hassidus and tradition. I love it sincerely and I love to make fun of it too. Honestly if you don’t think there is anything hilarious about living in 21st-century america but pretending fashion wise that its 1820s Hungary, then you take yourself too damn seriously. I think the Baal Shem Tov would probably agree with me but who the f*ck am I to speak for him? I’m just a clown. But I think we need clowns as much as we need rebbes.

Moshe Kasher is the author of “Kasher in the Rye: The True Tale of a White Boy from Oakland Who Became a Drug Addict, Criminal, Mental Patient, and Then Turned 16.” He is an LA-based comedian who was named iTunes Comedian of the Year. He is a regularly featured guest on E’s Chelsea Lately, Late Night with Jimmy Fallon and Comedy Central.

The [Jewish Book Council][13] is a not-for-profit organization devoted to the reading, writing and publishing of Jewish [literature.][14] For more [Jewish literary blog posts,][15] reviews of Jewish books and [book club resources,][17] and to learn about [awards][18] and [conferences,][19] please visit [www.jewishbookcouncil.org.][13]

MyJewishLearning.com is the leading transdenominational website of [Jewish][20] information and education. Visit My Jewish Learning for thousands of articles on Judaism, [Jewish holidays,][23] [Jewish history][24] and more.