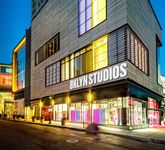 Heaven isn’t up, it’s down. That is, one flight below street level, where the DeKalb Market Hall has the greatest selection of food vendors in Brooklyn.

It was nine o’clock on a weekday morning, and my wife and I were breakfasting while soaking in the Market Hall’s airy post-industrial vibe. At Café D’Avignon, we got fresh coffee, avocado toast with radishes, and a salmon bun — a brioche bun with cream cheese and smoked salmon, or as I like to call it, Jewish crack.

My wife, Brooke, looked over the table at me with love in her eyes.

When I was asked to write about City Point, the new lifestyle center in Downtown Brooklyn, I knew I had to experience what it had to offer. I figured the best way would be to follow the advice of its slogan: “morning to midnight.” I hadn’t known that it would be so fun. Or, that my wife would be tagging along. “Sorry, no,” she said. “You’re not spending the day eating and shopping without me.”

City Point is ridiculously easy to get to. If you Uber, there’s an entrance on Flatbush Avenue. But the subway is your best bet. City Point is right above the Dekalb Avenue station (B, D, N, Q, R). Hoyt Street (2, 3), Nevins Street (4, 5), and Hoyt-Schermerhorn (A, C, G) are very close.

While Brooke nipped off Trader Joe’s, I stepped into Fellow Barber. As a follicularly challenged man, I don’t get many haircuts. But a shave and a beard trim is always a manly treat, and I love Fellow Barber’s traditional-but-stylish approaching to barbering.

Feeling refreshed, I went to meet Brooke at out next area of research, Target. As usual, we ended up buying more than we intended — I just needed pencils, and I also left with a drawing pad for my kid, deodorant, and Vaseline. Fortunately, this was Target, where you don’t part with much cash.

Next: Century 21. Surprisingly, the highlight of this excursion was not the bargains. It was the friendly, helpful staff — a welcome change from another Downtown Brooklyn department store that shall remain nameless, but rhymes with Tracy’s. Another high point was the gleaming, spacious men’s dressing room, believe it or not. Apparently, the women’s is even more spacious, but for some reason the clerk wouldn’t let me look.

After all this research, it was time for some much-needed nourishment. Since we’d been dying to see Black Panther, we decided to kill two birds with one stone. The top floor of City Point houses an Alamo Drafthouse, the cinema that features fine food and drink, as well as supremely comfortable seating.

The movie looked amazing on the big screen, the sound quality was pristine, and there was something divinely enjoyable about getting a delicious Asian salmon salad delivered right to my seat along with the rare treat of a lunchtime beer.

After the movie, we had to do the responsible thing and pick up our child from school. We zipped into Manhattan and were back at City Point, seven-year-old in tow, in no time. We immediately headed downstairs to heaven, meaning Dekalb Market Hall, for an early dinner.

I had been to City Point before for a business lunch at Han Dynasty, which specializes in exceptional Szechuan cuisine. That was my vote for dinner, but the boy wanted a cheeseburger. He made this clear by repeating, approximately five hundred times, “I want a cheeseburger.” So, we took him to Andrew’s Classic Roadside Hamburgers. Brooke opted for a selection from DeKalb Tacos. If I wasn’t having Chinese, I wanted another Jewish staple, a Katz’s pastrami sandwich.

Here a wonderful thing happened. As I waited for my sandwich, a young woman, clearly a tourist, asked the counterman, “Which sandwiches are without meat?”

Katz’s is an ineradicable part of the New York landscape, the culinary Brooklyn Bridge. So, I wondered if this outpost was up to Katz’s standards. It is. After three-quarters of a pound of pastrami I thought I couldn’t eat another bite, but for the sake of my research I forced down an outrageously good brownie from the POP Cake Shop.

It seemed like a good idea to move around a bit. Fortunately, City Point does a great job with family-friendly events. Today it was Ping-Pong Madness, with free tables and a DJ. There was a fun, neighborly atmosphere and a nice mix of locals and tourists pinging and ponging.

One final treat at Fortina: a glass of red for Brooke and a Manhattan for yours truly. It was now, to our astonishment, almost nine o’clock. We thought it best to get the boy home before he turned into a screaming pumpkin.

Thus, to my disappointment I had to leave City Point before midnight. At least I am already prepared for my next visit. I’ll be taking the to Alamo for All, family screenings at the Alamo Drafthouse. And I’m eager for a drink or two at the House of Wax, a creepy-in-a-cool-way old-timey bar in the lobby of the Drafthouse.

As a parent, I’m glad to have City Point in my back pocket, as it were. Aside from the family events, I’d be remiss if I didn’t mention Flying Tiger Copenhagen, one of my favorite resources for cool and unusual kids’ toys and projects.

I’ve long had a soft spot for downtown Brooklyn. It’s diverse, convenient, and eminently walkable. With City Point, downtown finally has the shopping and food hall center it deserves.

This article was paid for and produced by City Point Brooklyn. The news and editorial staffs of The Forward had no role in its preparation.

I Spent 8 Hours At City Point Brooklyn And Found Myself