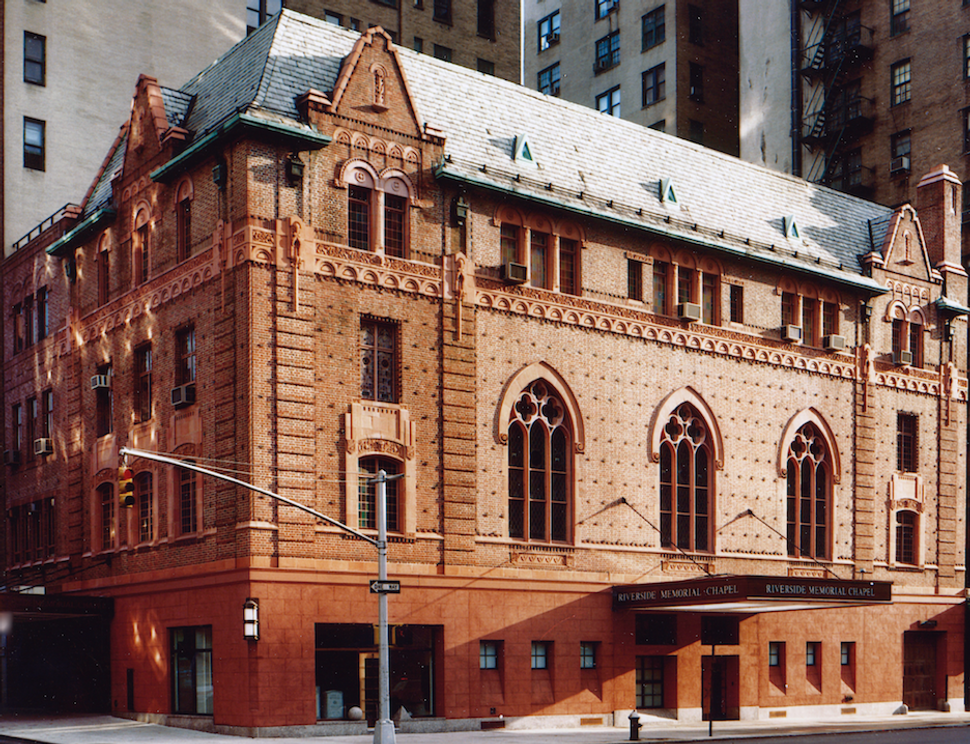 Riverside Memorial Chapel has witnessed over a century of New York’s Jewish history. From its beginning in 1897 as a livery stable on Manhattan’s Lower East Side, to the opening of a funeral business in Harlem in the early 1900s, all the way to the inauguration of the four-story chapel on the Upper West Side in 1926, the chapel has seen it all.

Today, the chapel’s main location on Amsterdam Avenue at West 76th Street is an Upper West Side landmark. With its impressive gothic architecture and large, arched windows, it’s hard not to notice it when passing by.

“The chapel is never closed,” said the chapel’s president, Charles S. Salomon. “Riverside is a lot like El Al,” he said — funerals are held on all days but Shabbat.

Back in its Lower East Side days, Riverside was a livery stable owned by the Meyers family, and assisted the local community of Jewish immigrants in the transportation of the deceased to one of the cemeteries outside of the city.

The funeral process, Salomon explained, used to take place in the house of the deceased: The tahara, the traditional purification of the body, usually took place in the kitchen, where the bathtub was located. The horse-drawn hearse and carriage would transport the casket and the family to the cemetery, located in farmland, for the most part in Queens. The rest of the community came together only after the family and the rabbi had returned from the burial to begin the shiva, the first seven days of mourning.

Most Jewish immigrants on the Lower East Side never learned English, but their children, Salomon said, as they became more affluent and their social circles expanded, no longer deemed home funerals appropriate.

“They needed a public space,” he said. That’s how the tradition changed.

The Meyers, now together with the Rosenthals, moved their business to Harlem, following a wave of Jews who moved there in the early 1900s. Over the years, motorized vehicles replaced the horse-drawn carriages.

During the Roaring Twenties, when New York enjoyed a period of great economic prosperity and urban expansion, the company moved again, this time to the Upper West Side, where it built Riverside Memorial Chapel. Its main facility, the Gothic Chapel, seats 350 people and is famous for its vaulted ceiling painted as a night sky.

“They built the chapel as an experiment,” said Salomon, “and became the leaders in Jewish funeral service.”

Charles Salomon began working at the chapel in 1963 as a receptionist. His parents knew the owners, who had invited him to work there. In the years to follow, he had “every job” in the building: He worked night shifts, helped transfer human remains to the chapel, and worked as a liaison between the chapel and the Israeli consulate to coordinate transfers for burials in Israel. Ultimately, he became a funeral director and, in 1989, the president of the chapel.

“The funeral process is very people-oriented. It takes a lot of manpower,” Salomon said. “There are no machines in the process.”

What has changed the most in the last 30 years is people’s attitude towards planning their own funeral. Nowadays, Salomon said it’s become “very common” for people to prearrange their own funeral, “so that their children don’t have to be burdened financially and they can select what they want.”

Riverside Chapel, which over the years has undergone multiple restorations, serves Jews of all denominations and offers a variety of ceremonies in different chapels within the building, from intimate gatherings to high-profile funerals. As Salomon put it, “When you’re offering your services to the New York Jewish community—you’d better have something nice and unique.”