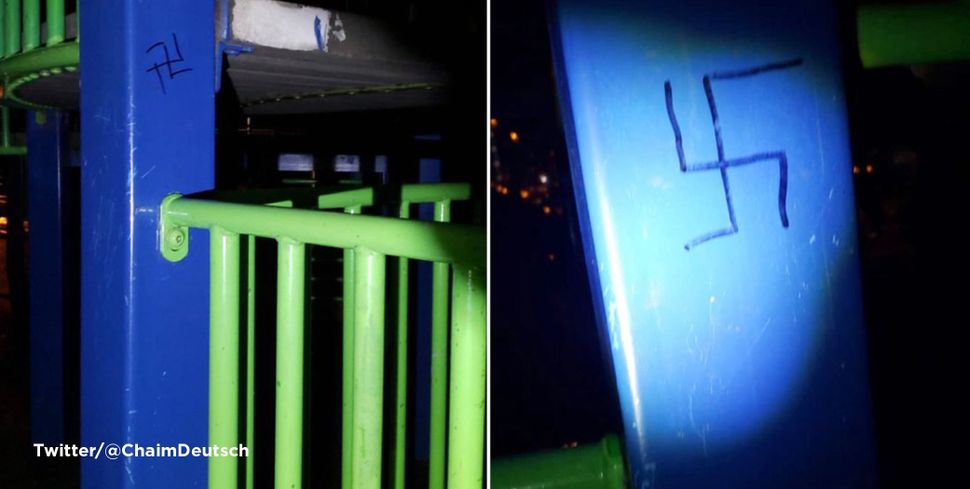 “Are swastikas in playgrounds the new normal?” tweeted a New York City Councilman.

Twice in three days late last month, swastikas and other anti-Semitic graffiti were found in New York playgrounds — in Brooklyn and Queens, among the most ethnically diverse urban areas in the world. On the first Monday of March, across the country in a Los Angeles playground, a trail of blood and swastikas were found.

If swastikas in playgrounds aren’t enough to galvanize our nation, what is?

Maybe this: In one of these examples, the graffiti — the misspelled “Hail Hitler,” somehow more poignantly horrific than “Heil Hitler” — was scrawled not by some neo-Nazi alt-righter, but by a 12-year-old. This is a child, a child who has learned hate, but one who likely didn’t understand what these symbols mean to those who see them, who didn’t know they carry connotations of genocide.

As chilling as it is to think of swastikas in playgrounds, there’s a physical human toll, too, including a flurry of violent attacks in the months since the Tree of Life synagogue attack in Pittsburgh. For many of us, this is the first time we’re seeing anti-Semitism in myriad ugly forms invade spaces throughout our nation, our discourse, our movements, and our lives — and around the world. The ADL reports a staggering 60% rise in the rate of such incidents nationally.

At the same time, ignorance about the Holocaust and anti-Semitism is at unacceptable levels, a clear sign we need a far louder outcry for public education. A 2018 poll by the Conference on Jewish Material Claims Against Germany found that 52% of Americans wrongly believe Hitler came to power through force. Some 31% of Americans, and 41% of millennials, believe that 2 million or fewer Jews were murdered in the Holocaust. What’s more, 41% of Americans, and 66 percent of millennials, couldn’t say what Auschwitz was.

A Crucial Role to Play

Our national strategy for keeping playgrounds — and all public spaces — safe must run deeper than policing.

Fair-minded families — mothers, fathers, and guardians — are talking to their older children about the legacy and resurgence of hate, from slavery and racism to Nazism to modern-day atrocities and the rhetoric of intolerance. They’re being upstanders in their own lives, teaching their children by example, speaking out against hate. They’re having difficult, age-appropriate conversations about why we need to learn about the horrors of the past to fight the hate of today and tomorrow — and why it’s so important to stand up to hate. 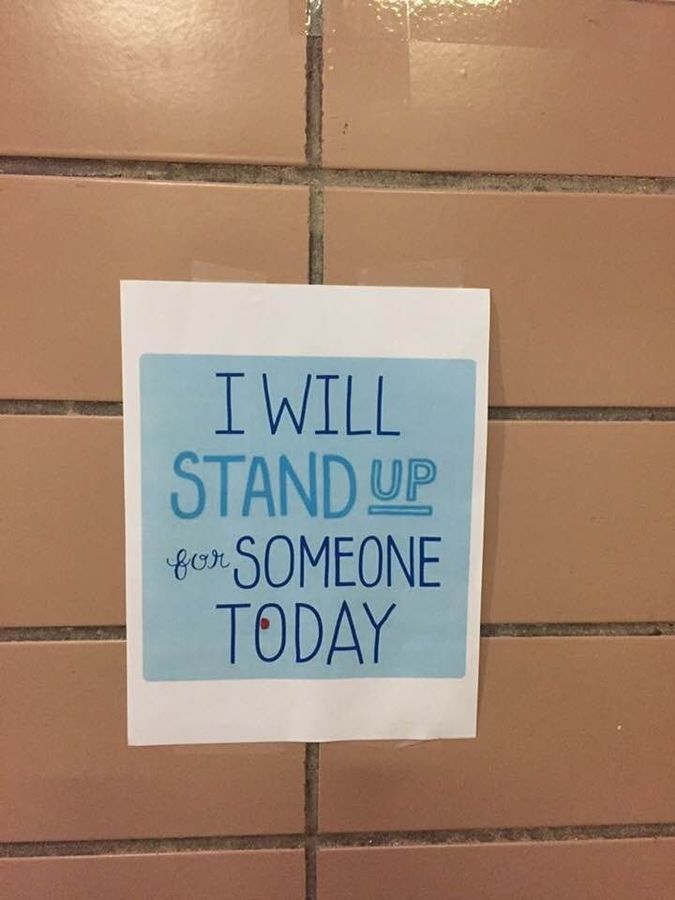 A poster in a Brooklyn school stairwell encourages students to stand up for others. Image by Hadassah

The role of parents and concerned citizens in fighting hate is crucial — not just for what values we pass onto the next generation at home, but for how hard we fight to make sure our nation’s schools are teaching these essential lessons from history.

In the decades since World War II, acts of anti-Semitism and racism went from being part of the status quo to being illegal. Think, “No Jews. No [Negroes]. No dogs.” That didn’t just happen — it took a culture shift and the many outspoken advocates who fought to pass laws against discrimination and hate crimes. Yet here we are in 2019, watching hate crimes spike across the country.

It’s worth repeating: Right now, the role of parents and concerned citizens is crucial. One way to address this trend is to rally around a key piece of bipartisan legislation gaining support nationally, the Never Again Education Act, introduced by Rep. Carolyn Maloney of New York. The bill, if passed, will create a new grant program at the U.S. Department of Education to provide schools with the resources and teachers with the training necessary to teach our nation’s children the lessons of the Holocaust and the horrific consequences of hate and intolerance.

Hate Is Learned — So Is Fighting It

On a sunny mid-March day in New York, commuters in Brooklyn came across a poster of Supreme Court Justice Ruth Bader Ginsburg and the words, “Die, Jew bitch.” (Women often encounter a special blend of misogynistic anti-Semitism.) Yet also this March, in a school stairwell — also in Brooklyn — hangs another poster, this one unmarred. It says: “I will stand up for someone today.”

The signs are clear. It’s time to act.

Hadassah, the Women’s Zionist Organization of America, is the largest Jewish women’s organization in the United States. With 300,000 members, Associates and supporters, Hadassah brings Jewish women together to effect change. Hadassah is the non-governmental organization convener of the bill, working with Rep. Maloney to mobilize support and congressional sponsors.