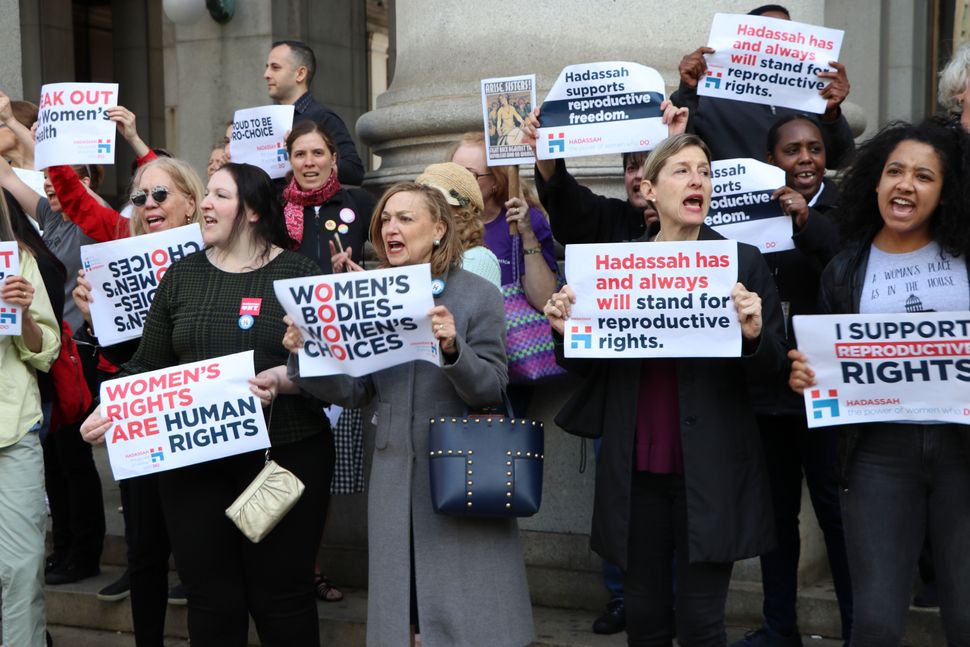 At the Manhattan Municipal Building, a lunchtime pro-choice rally for the Day of Action on May 21. Image by Courtesy of Hadassah

On Tuesday, women’s health advocates across the political spectrum sent a loud and clear message in support of reproductive rights during the National Day of Action. In every state around the country, according to USA Today’s count, there were more than 450 events, a rapid-response mobilization sponsored by dozens of national organizations, including Hadassah.

“They’re eating away at Roe v. Wade, piece by piece. That’s what we’re afraid of,” Hadassah Greater Baltimore co-president Barbara Fink told  local TV news WBAL-TV, referring to the slew of states passing severe restrictions on reproductive freedom. The Day of Action was spurred on by a new Alabama law, signed by the governor last week, which bans nearly all abortions with no exceptions for rape or incest. Hadassah supporters in Baltimore joined with other community members, including Paula Hollinger, a former Maryland State Senator wearing a Hadassah visor.

At noon in New York City’s Financial District, 50 protesters gathered on the steps of the Manhattan Municipal Building for a lunchtime rally, holding Hadassah signs and cheered on by passing cars and sidewalk pedestrians.

A Moment to Mobilize

It was Monday afternoon when Viviane Kovacs, Hadassah National Vice Coordinator of Philanthropy, asked if she could take one of the rally signs stacked neatly on a cabinet at Hadassah Headquarters. Just minutes earlier, she’d gotten a Hadassah email to mobilize around Tuesday’s Day of Action and had already reached out to friends and family about joining her in Mineola, NY.

By 8 p.m. Monday night, Hadassah region presidents from around the country were on a conference call being briefed by Hadassah National President Ellen Hershkin and Rabbi Rebecca W. Sirbu, Director of Membership and Unit Services, on how to mobilize for the Day of Action. 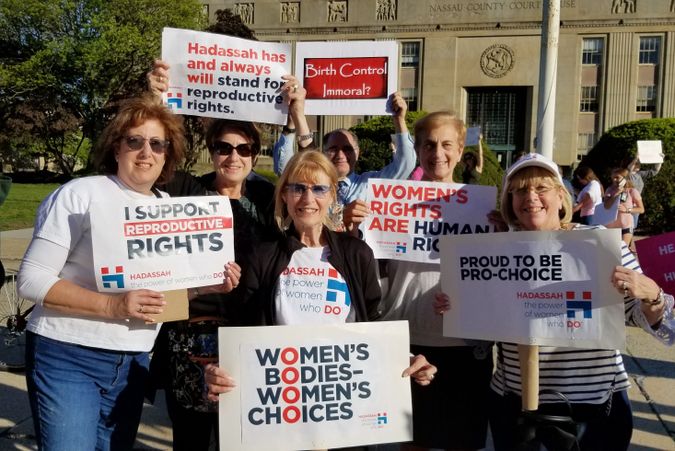 Hadassah Nassau stands up for choice in front of the Nassau County Courthouse on the Day of Action, including Hadassah National President Ellen Hershkin. Image by Courtesy of Hadassah

“Now is the time to raise our voices publicly to support reproductive choice. Hadassah has, and always will, unequivocally stand for women’s reproductive rights and empowering women with the knowledge to make critical health decisions for themselves and their families,” Hershkin said in an urgent dispatch. “For decades Hadassah members and leaders mobilized for reproductive rights — passing policy statements, advocating at the state and national level, attending rallies around the country, and empowering women to speak out.

“Most of us had hoped we would never have to mobilize again to protect a woman’s right to choose,” she said. “Yet recent legislation in states around the country has made it essential that we do.” Many who turned out for the Day of Action had participated in the March for Women’s Lives in 1989, 1992, and 2004, when Hadassah’s National President June Walker, z”l, addressed the crowd of over 1 million people.

But for others, this was the first time they’d gone to a pro-choice rally — an issue they thought their parents and grandparents had put to bed.

The Day of Action may be behind us, but for anyone who cares about women’s health, there’s so much more to do.

Hadassah, the Women’s Zionist Organization of America, is the largest Jewish women’s organization in the United States. With 300,000 members, Associates and supporters, Hadassah brings Jewish women together to effect change. Hadassah is currently mobilizing on women’s health issues nationally and at the state level.