JScreen, a genetic screening kit that gets delivered to your home.

Genetic carrier testing was just a formality for Katie Rosen and Matt Kurzmann when they decided they were ready to grow their family. Two Ashkenazi Jews, they knew it’s what you did to put your mind at ease. So they skipped the doctor and went online to order JScreen, a genetic screening kit, to be delivered to their home.

That decision changed their lives.

The young Michigan couple was stunned to learn that they were both carriers of a genetic mutation called RAPSYN, a rare neuromuscular condition. It can also lead to a variety of traumas: miscarriages, stillbirth, early death for the baby.

“I started sobbing,” Rosen, 33, said. “It’s a total freak thing that we both had this mutation. I’m still in shock, I think.”

RAPSYN is one of the newest diseases added to JScreen’s 226-disease screening panel. Half of those are common in people with Jewish ancestry, and the majority aren’t tested at a doctor’s office.

JScreen “came together out of need,” said Hillary Kener Regelman, JScreen’s director of national outreach. It was developed six years ago after Emory University, where it’s based, commissioned a national study of Jews of childbearing age and found that only 24% had been screened or were aware of the need for genetic carrier testing. 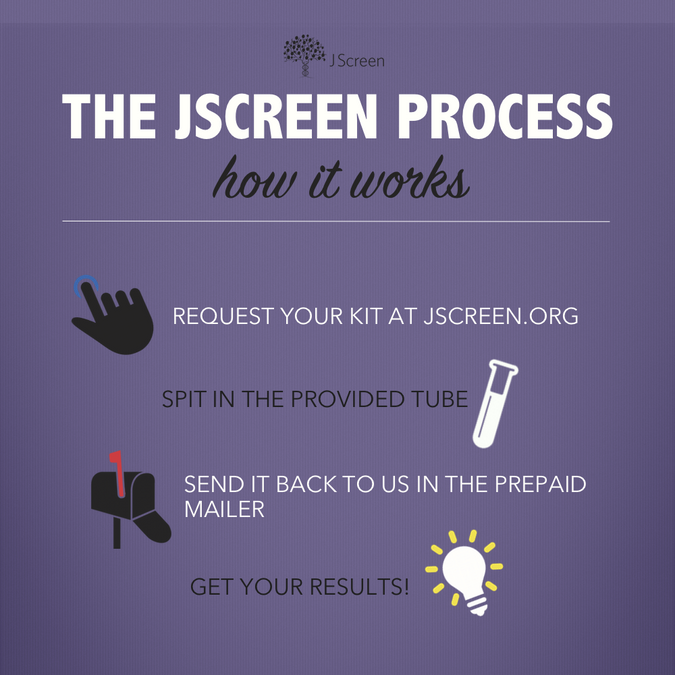 JScreen makes it easy to test for hundreds of genetic mutations common in people with Jewish ancestry. Image by JScreen

There hasn’t been a large push for screenings since the 1970s and 80s, when young Jews were getting tested to see if they were carriers for Tay-Sachs, a genetic metabolic disease that leads to childhood death. It was practically mandatory back then, but many children born in that era who are having children now haven’t even heard of Tay-Sachs.

Tay-Sachs was the only Jewish genetic disorder that could be screened for back then. Even six years ago, JScreen was only testing for 19 diseases common in Jews. Now, with advancements in research, there are 226.

While the product is for everyone, the goal was to make it more accessible to this niche-but-strong demographic, from stressing the importance of screening to making it affordable and simple.

“We’re keeping babies healthy, but it’s not top-of-mind for everyone,” Kener Regelman said.

It was for Kurzmann and Rosen, although they were admittedly too busy to go to the doctor. Rosen had heard about JScreen from a friend, and within a few hours of requesting information, a counselor got in touch with them and their doctor. When the kit arrived, they each spat into in a tube and sent their saliva off for testing. They both come from big families with no known genetic diseases — they weren’t worried. 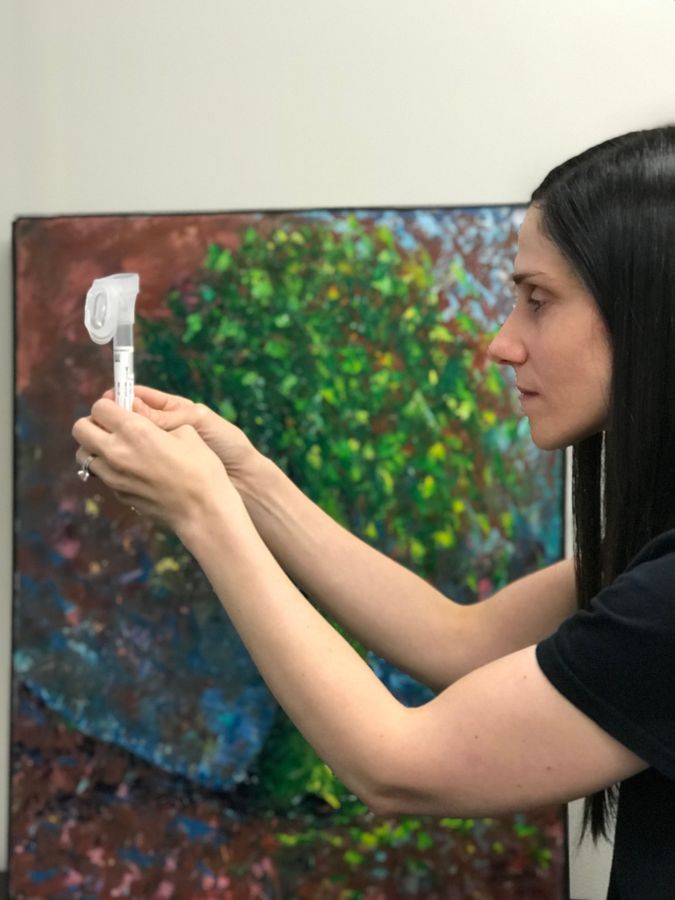 A JScreen user sending off her saliva for testing. Image by JScreen

They also weren’t concerned when their counselor needed to set up a meeting to discuss the results. It was April 2018, and they didn’t have plans to start trying to have a baby until that July. Rosen and Kurzmann kept putting it off, JScreen kept pushing for a phone call.

“Are you in a quiet place? Are you sitting down?” their counselor asked. The couple had considered taking the call while out to dinner, and looking back, they said they’re thankful they stayed home. “It’s unusual,” the counselor noted first, and asked Kurzmann and Rosen if they’re sure they’re not related. (They were positive — Rosen’s brother, a genealogy enthusiast, looked into it before they tied the knot.) That’s when they were told that they were both carriers of a hearing loss disorder and as well as the rare RAPSYN mutation.

They didn’t just receive the news; they also learned what it meant. If they were able to have a baby, there would be a close to 50% chance of them having one or both of the genetic diseases. Then it turned into a conversation about what their options were: They could get pregnant and leave the rest up to fate; they could get pregnant and get a chorionic villus sampling (CVS) or amniocentesis test, which determine if the fetus is affected; or they could go through in vitro fertilization with preimplantation genetic testing, which determines if the embryos have the specific genetic mutation before implanting.

“Having that information ahead of time lets couples plan ahead,” said Karen Arnovitz Grinzaid, executive director at JScreen and assistant professor at Emory University School of Medicine. “And that’s really our goal, to give people information that they can use for family planning.” 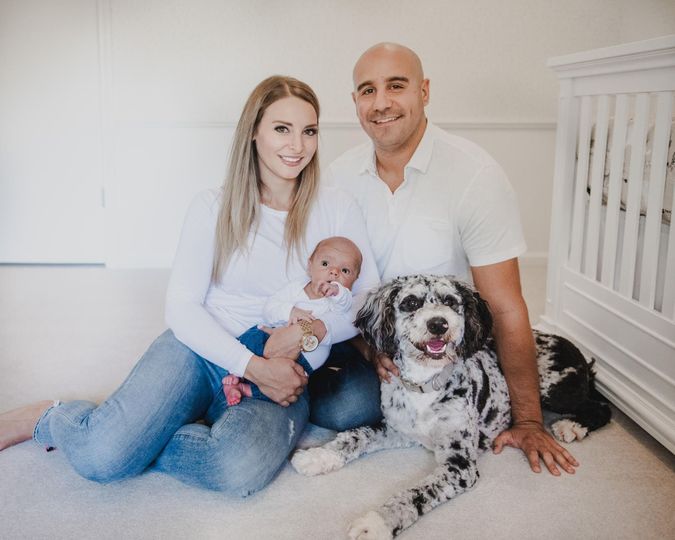 They were in the right financial situation to choose the last option, IVF with preimplantation genetic testing. Again, they stayed calm, assuring themselves that everything was fine, that they would produce a lot of viable embryos, that they were overreacting. In reality, of the eight viable embryos, six of them tested positive for at least one, if not both, of the diseases, and one tested positive for another common chromosomal abnormality.

It was another gut punch. But they had one unaffected embryo — now they had to decide whether to implant it or wait until after another round of IVF to have more options in case the implantation didn’t take, which is common for first pregnancies. In the end, they decided to take the chance and implant the embryo.

In the car with them that day in September was their baby boy, Brock. Recently they started talking about undergoing another round of IVF testing to see if they can give him a sibling. 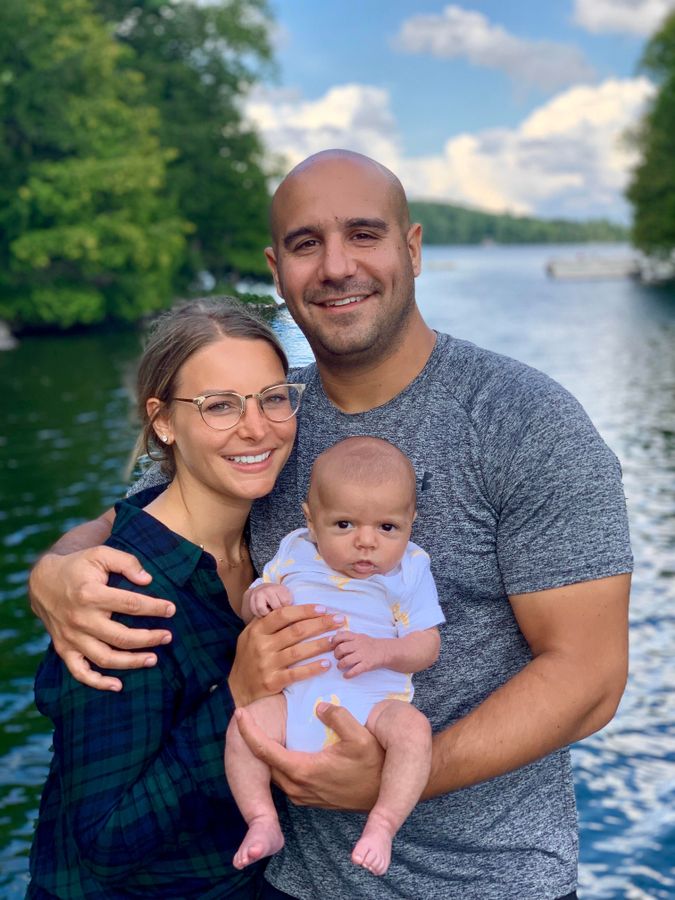 The staff at JScreen looks forward to these stories, and the photos of cute babies sent from the families, Kener Regelman said.

“We’re helping people plan for the future health of their family, and now for their personal health through genetic testing,” she said, adding that the screening process is the same when testing for the BRCA genes, which are also common in the Jewish community and can lead to breast, ovarian, prostate and pancreatic cancers.

“We’re not a sterile medical organization; we’ve become an institution that is loved by the Jewish community, left to the right, observant to not observant,” she continued. Families are “grateful for us. It’s fun watching people take advantage of this important resource and making a topic that could be scary, or that they’re uncertain or unfamiliar with, as easy as possible.”

For Kurzmann and Rosen, JScreen changed the course of their lives.

“We’re very lucky,” Rosen said, tearing up again. “I know for some people getting this information, having it change the way that they thought they were going to conceive a child, this would be devastating.”

“It was very hard on us psychologically, the whole process,” Kurzmann said. But now they share the information whenever they can.

“I tell everyone who is young, Jewish and getting married: ‘Oh? You have a boyfriend? You just went on a date?’” Rosen said, laughing, “make sure you do JScreen.’”