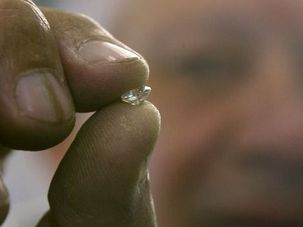 Israel has a long love affair with the diamond industry. It’s hoping to recapture a share of the cutting and polishing business that has moved to India and China.

Keeping Young Women Hidden — at the Expense of Their Bodies

Despite my earlier post, it now appears that Rabbi Yizhak Silberstein did support the idea that a girl whose mother refused to buy her “religious clothes” should cut her legs in order to force the mother’s hand. An apparent recording of the rabbi’s discussion of this topic surfaced on the Internet today, in which he says that girl deserves the “highest praise” for sanctifying God’s name with her absolute dedication to Torah.

Did a Rabbi Permit Self-Mutilation To Promote 'Modesty'?

Ynet has a troubling story about a high-profile rabbi in Israel who gave advice to a young woman to cut her own legs in order to stay religious. The story, if it’s true, conflates male religious authority, extreme body cover and self-mutilation, and brings the discussions of the female body in Judaism to a whole new low. The problem is that this story may not be true, in which case instead of highlighting sexism in Orthodox Judaism, the story becomes an example of journalists’ sometimes overzealousness in their desire to attack religion by pretending to care about women. Especially given the recent history of media attitudes towards France’s burqa ban, the actions of certain journalists are no less troubling than those of religious leaders controlling the female body.