The Kittel Collection is a series of clothing pieces that explores the different ways clothing is used as a vehicle for meaning and identity within our tradition and literature. The kittel is a simple, white, garment used as a burial shroud, and customarily worn by men on various Jewish holy days. Each month, The Sisterhood showcases, and looks at the meaning behind, a kittel from my collection. View images of this month’s kittel, the Soulful Kittel, after the jump.

In Genesis, when Jacob sees Joseph’s coat covered in blood, and thinks that his precious son is dead, he tears his clothes and begins to mourn. The act of tearing, keriah, is encoded in Jewish law as part of the ritual of mourning —whether expressing personal grief for a loved one or a national grief for the people’s destruction.

The Kittel as a Garment of Majestic Leadership

This kittel explores leadership. Specifically, the responsiblity of leading, and the leaders’ complex relationships to followers and to themselves. On Rosh Hashana our prayer leaders stand before God and together we crown God as King. 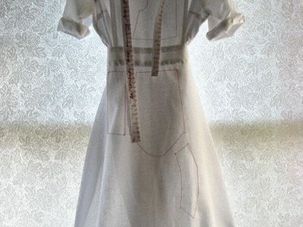 The Kittel as Maternal Love

“She is not worried for her household because of the snow, for her whole household is dressed in scarlet. ” (from ‘Eshet Chayil’ - Proverbs 31:21)

The kittel is a simple white garment that is traditionally worn by a groom on his wedding day, by men on Rosh Hashanah, Yom Kippur and Seder nights, and as a burial shroud. In this space, over the course of the next several months, I will use the kittel to explore the many ways that clothing is used as a metaphor for meaning and identity within Jewish tradition and literature.