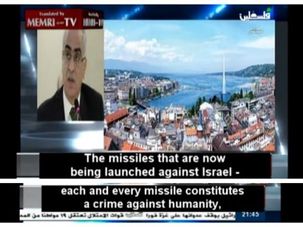 Here’s a remarkable bit of television — official Palestinian Authority TV, to be specific — in which the Palestinian delegate to the United Nations Human Rights Council in Geneva tells an interviewer that Hamas’s rocket fire from Gaza is a crime against humanity. Plain and simple, no hedging. In Arabic (with English subtitles). Watch it below. 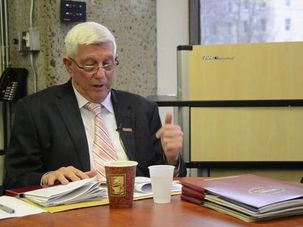 Yigal Carmon of MEMRI: The impact of the Arab Spring on Anti-semitism and Holocaust Denial in the Arab and Muslim World

Yigal Carmon, founder of Memri, an organization that monitors Middle East media, talked about Arab anti-semitism and shared video clips of Imams and leaders, Morsi and others, demonizing Jews, denying and distorting the facts of the Holocaust, and urging their people “to complete the job”. He also shared a representative clip (59:33) of a new brand of Muslim scholar in the middle East, openly and clearly refuting Holocaust denial and other anti-semitic myths on Arab television. Carmon claims that although the anti-semitism continues to exist, this new breed of scholars has become possible due to the the Arab Spring.

Somebody Is Stalking Me and Making Stuff Up

My old buddy Jonathan Mark at the Jewish Week tipped me off this morning that I’m mentioned by name in an on-line Special Bulletin published yesterday (November 2) by Memri, the Middle East Media Research Institute. The bulletin features translated excerpts from a column about J-Street that was published the previous day in Al-Ittihad, a government-owned, Arabic-only daily newspaper in the United Arab Emirates. I was pretty excited to hear about this. There’s nothing a writer likes better than to see his name in print (other than Ben & Jerry’s Chocolate Therapy, of course).