Ehud Barak: Afraid of the Remix

“If the Minister of Defense knows what a remix is, then I can go to bed peacefully at night,” Noy Alooshe commented humorously as he posted the above clip on Facebook yesterday. The video is taken from an interview Ehud Barak gave to Israel’s Channel 10. In it, Barak shows host Guy Lehrer his smart phone and tells him that he is learning Chinese from an online app. When Lehrer asks him to say a sentence in Chinese for him, the Minister of Defense demurs, saying that he’ll sound silly and “they’ll just make one of those remixes out of it.” 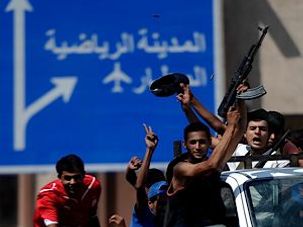 Rebels Sang Israeli's Song as They Advanced on Tripoli

In news today from the “it’s a brave, new, global world” department, Michal Levertov, in a piece for Institute for War & Peace Reporting, wrote that television reports this past week have shown Libyans singing and dancing to “Zenga Zenga” as the rebels advanced on Tripoli.

Some Israelis are suggesting that Ehud Barak’s portfolio be changed from Minister of Defense to Minister of Camera Angles, after he was caught on camera giving stage directions to the commander of the IDF’s Southern Command as he briefed the press on the terrorist attacks earlier today near Eilat.