A new Italian film that attempts to defend wartime Pope Pius XII against accusations he turned a blind eye to the Holocaust has been panned by the Vatican as well as Catholic and Jewish media. 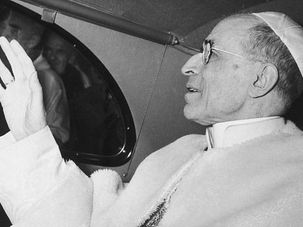 A Jewish leader expressed concern to Pope Francis on Monday over attempts to make a saint of World War Two-era Pope Pius XII, who has been accused of turning a blind eye to the Holocaust.

At the entrance the visitor is greeted by an old clip of Jewish children in the Ukraine singing “Hatikva,” the national anthem. The visit ends with the establishment of the State of Israel.

Yad Vashem is due to unveil a new wall text on Sunday describing the actions of Pope Pius XII during World War II, softening a previous message which stated that the head of the Catholic Church had not protested verbally or in writing to the murder of Jews by the Nazis.