Why Sachlav Is Really Israeli — and Arab Too

Cultural purists are outraged that some call sachlav an Israeli drink. But Lior Zaltzman says the custardy milk quaff belongs to the entire Middle East — and we can all stake a sip. 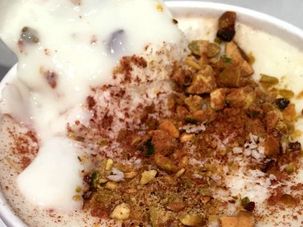 A tiny stall in Union Square is one of the only places in New York you can savor sachlav, the thick milky drink that is Israel’s answer to hot chocolate.

Sachlav: The Hot Chocolate of the Middle East

A mug of warm apple cider, a glass of mulled wine, or a cup of hot chocolate is the perfect thing to take off the chill as the air gets nippy and sometimes coming in from the cold isn’t quite enough to warm us up. But what do Israelis – in a country that historically doesn’t grow cocoa beans and doesn’t cook much with apples or wine – drink when the weather turns (albeit later in the season)?