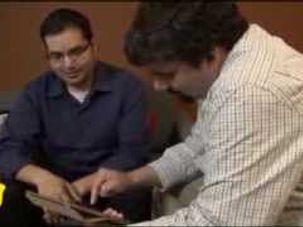 With technology and the internet moving as fast as it is, almost anything is now available at the touch of a button of a click of a mouse. Which is why some companies are now producing apps for phones and other mobile devices that promote Judaism and make it more accessible to anyone where ever they are. Ronnie and Barry Schwartz are at the forefront of Judaism’s digital age. Good at spotting a potential market, they’ve been drawing on their Jewish roots to create apps for cell phones and tablets. The idea, to make Judaism more mobile. From humble beginnings the business has grown considerably. Ronnie started it in his bedroom 15 years ago while he was still in high school. Now they make market-leading apps with hundreds of thousands of users worldwide in the rapidly expanding software sector. This map pinpoints where in the world people are using their programmes at any given time. They’ve made more than 30 Jewish apps, everything from finding a kosher restaurant to learning the Talmud or something more basic like the alphabet for Jewish children. Mayer Pasternak also understands the added value technology can provide. He’s behind Artscroll, which lets users access all 73 volumes of the Talmud through a single app. He thinks mobile technology is not just augmenting traditional learning, it’s actually changing the way people learn. Indeed developers believe apps like these are better than books, as they allow users to see more than just words on a page. But many ultra … 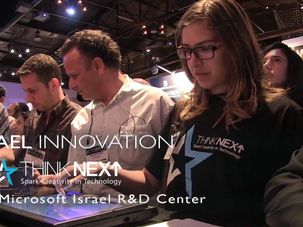 www.israel.org Israeli innovation at ThinkNext, Microsoft Israel R&D center An application that advises on what’s good (or bad) for you to eat, a service which encourages safe driving and an application which reminds you to take your medication on time, are just a few out of many new exciting technologies that were presented at the Israel innovation at Microsoft Israel’s ThinkNext convention. Please credit the MFA of the state of Israel for any use of this video. Visit the MFA’s Social Media Channels: Facebook - www.facebook.com www.facebook.com Twitter - www.twitter.com www.twitter.com Find us on Instagram: @IsraelMFA & @StateOfIsrael

At Yeshiva Tiferes Yisroel, an all-boys yeshiva in the Flatbush section of Brooklyn, everything — food, behavior, clothing — must be kosher. If school officials get their way, they’ll soon be adding one more thing to that list: at-home Internet browsing.

If there’s one thing that Israelis don’t get, it’s sarcasm. Try being sarcastic, whether in English or in Hebrew, and more often than not it falls flat, sometimes leading to embarrassing misunderstandings.