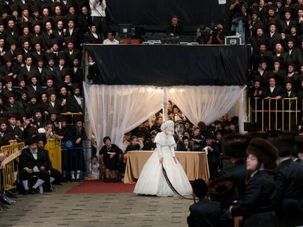 There are hundreds of American agunot, Orthodox women whose husbands refuse to grant them a Jewish divorce. A new book discusses the plight of these ‘chained’ women.

Nearly every month, it seems, there is troubling news relating to the status of women in Israel. Late last year it was women forced to sit at the back of public busses, and then Haredim attacking schoolgirls in Beit Shemesh for being insufficiently modest. In October the leader of Women of the Wall was arrested and allegedly mistreated by police for leading others in prayer at the Kotel. And recently, according to the Jewish Orthodox Feminist Alliance, Knesset candidate Rabbi Eli Ben-Dahan declared that the agunah issue is caused by women’s groups trying to besmirch the rabbinical courts, rather than by husbands who refuse to divorce their estranged wives.

Jewish women’s head covering is once again in the news, a heated topic among rabbinic men who are obviously not afraid of a little invective when it comes to women’s bodies.

Why Do Men's Voices Lend Credibility to Jewish Women's Issues?

As a woman, I sometimes feel like I’m in a catch-22. I want to bring attention to issues concerning women, but I also want men to pay attention. When women are doing all the talking, we run the risk of marginalizing ourselves, of turning our ideas into “women’s stuff.” By inviting men to speak about women’s issues, we may gain credibility and breadth, but we contribute to the problem by having men speak on our behalf, muting our voices once again.