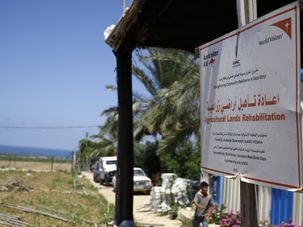 Christian aid group World Vision has laid off about 120 contractors in the Gaza Strip following allegations by Israel that the agency’s operations manager in the territory had diverted funds to the Islamist group Hamas.

Head of Christian Charity Arrested for Funneling Millions to Hamas

JERUSALEM (JTA) — Hamas has infiltrated an American NGO and funneled tens of millions of dollars to the terrorist organization, Israel’s Shin Bet security service said. Mohammed El-Halabi, 32, director of the Gaza branch of the international humanitarian aid organization World Vision, was arrested at the Erez Crossing between Israel and the Gaza Strip on…

An Israeli legal group is threatening to sue an Australian charity unless it stops funding a Palestinian not-for-profit organization alleged to be “an active arm” of a terror group proscribed under Australian law.