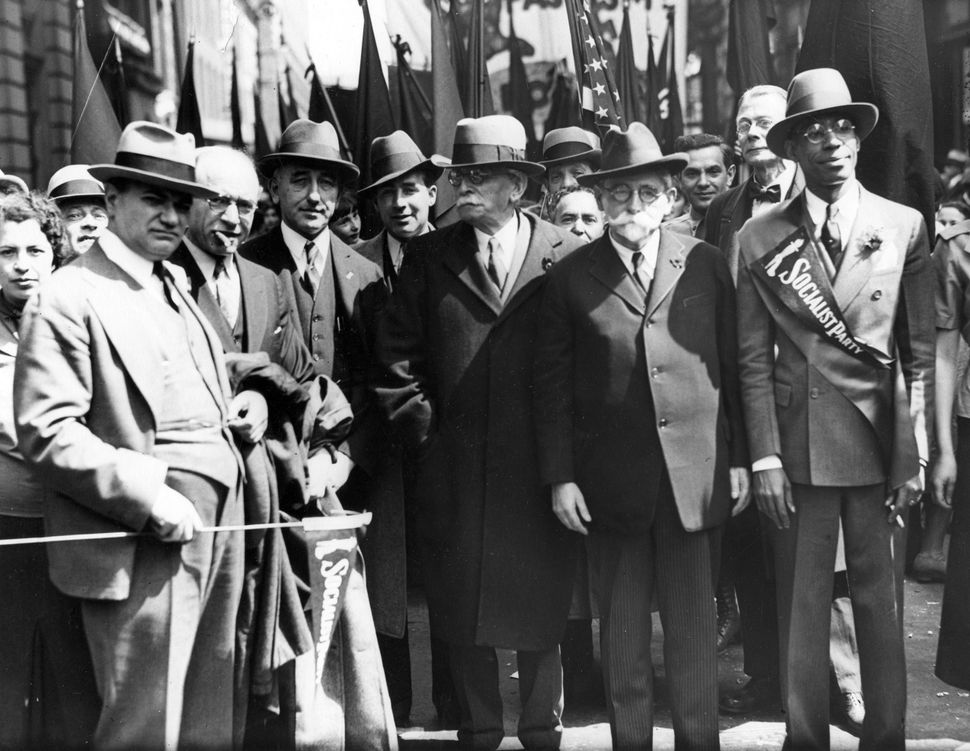 The Forward is one of 57 libraries, museums and city agencies, contributing to a new app called Urban Archive, helping make historical materials engaging and accessible. For Juneteenth, which celebrates the end of slavery in the United States, we highlighted Frank Crosswaith, the founder of the Negro Labor Committee, whose public speaking and political engagement was a regular topic in our pages. Crosswaith’s story is below; for more, check out our Urban Archive collection.

Frank Crosswaith (July 16, 1892 – 1965), one of New York City’s finest Socialist leaders, labor organizers and founder of the Negro Labor Committee, was frequently orating around town. On your average Sunday in January 1939, while The Forward rehearsed its upcoming pageant and ball, Frank Crosswaith debated an attorney named Mann, at St Luke’s Hall on West 130th Street in Harlem on the hot topic of Socialism vs. Capitalism.

While still working as an elevator operator, Crosswaith was awarded a scholarship by the Forward to attend the local East 15th Street Rand School for Social Science, where he also later taught. Only six years after graduating, in 1918, Crosswaith was listed on Eugene Debs’ 1924 gubernatorial slate as the candidate for Secretary of State, and was dubbed ‘the Negro Eugene V. Debs’ after that (other) socialist leader, namesake of The Forward’s own radio station WEVD.

In 1925, Crosswaith went on to become a founder of the Trade Union Committee for Organizing Negro Workers, where he successfully campaigned for several unions to accept black members and organized the racially diverse women into a laundry workers union and equally lent his labors to organizing the Black porters and maids of the Pullman train cars.

Crosswaith can be seen here (far right), in this photo along with The Forward’s founding editor, Ab Cahan (center, looking to his right), marching in the 1934 May Day anti-Fascism demonstration along with former vice-Mayor of Vienna, Austria Dr. Max Winter and over 100,000 other participants. In the same year, Crosswaith founded the Harlem Labor Committee with the mission of organizing black and white workers seeking higher wages, better working conditions and improved benefits.

As an organizer, Crosswaith advocated not only to secure safe and fair working conditions for Black workers, but also for the inclusion of Black people and their concerns within a labor movement still struggling to acknowledge the needs of Black laborers who were not always welcome in the unions.

Crosswaith frequently appeared in The Forward, especially when running for election. Here are just a few of his public appearances captured in the Yiddish Forverts: 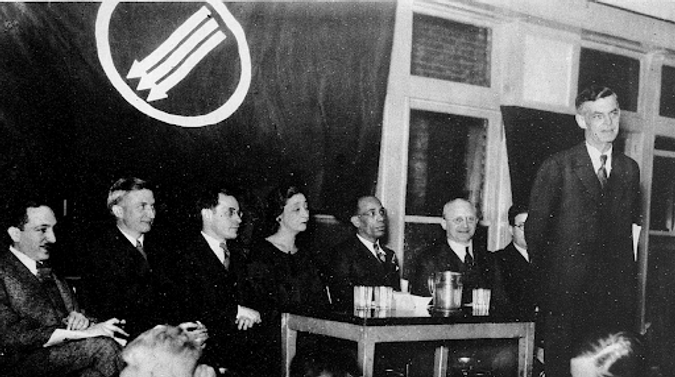 (1933, Bronx, NY), Frank Crosswaith on the dais at the Bronx Socialist Center as America’s first elected Socialist Mayor Jasper McLevy of Bridgeport, Connecticut speaks. (LtoR: Samuel Orr, Arnold Freese, Henry Fruchter, Gertrude Weil Klein, Frank Crosswaith, George Steinhart and Matthew Levy.) They’re photographed sitting in front of a symbol known as the anti-fascist circle, originally designed for German anti-fascists to be painted over Nazi swastikas. The circle has been adopted by many leftist organizations to represent anti-fascism, and is still used today by Antifa supporters. Image by The Forward 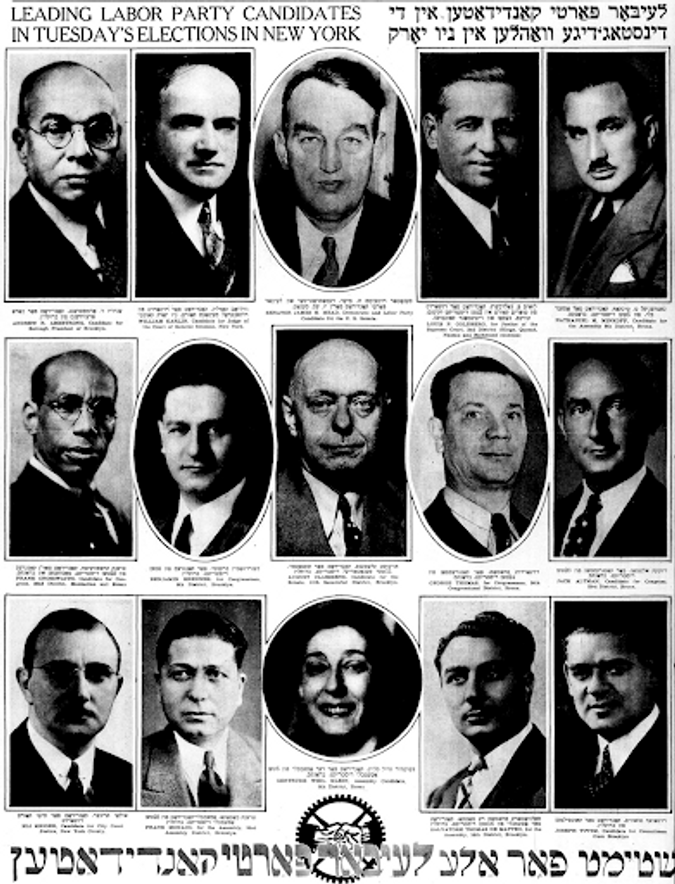 Crosswaith is seen here in 1940, campaigning as Labor Party candidate for Congressional Representative of the 22nd district, Manhattan and the Bronx, along with quite a few of the city’s Jewish socialist candidates including the one woman candidate for the Bronx’s 8th district Assembly, Gertrude Weil Klein. Published in the Forverts, this poster stated in Yiddish: Vote for all the Labor Party candidates. Shtimt far ale leybor parti kandidatn. Image by The Forward

In 1933, (l to r) Forverts Business Manager B.C. Vladeck , H. Laidler (insert), Frank Crosswaith, Charles Solomon and Louis Waldman were all Socialist Party candidates. The Forverts published this image of them as they spoke at the Brooklyn Academy of Music. They ran on an anti-graft better living conditions platform. Image by The Forward

As we celebrate the 155th anniversary of Juneteenth, remnants of the labor rights for Black workers which Frank Crosswaith dedicated his life to can be seen in the increased recognition of the holiday across the country as a day of paid leave, with the Chicago Tribune reporting that Nike, the NFL, Twitter and the New York Times have all designated the day as a paid holiday.

Prescient in running for public office while Black, Crosswaith also intuited the question still haunting the progressive movement today. Here, from a letter to the editor he wrote to W.E.B. DuBois in 1923 is the issue: Is it, or is it not, to the best interest of the race to espouse the cause of socialism and the social revolution; or, will the best interest of the race be served by further aligning ourselves with the Republican and Democratic parties?

This Juneteenth we invite you to pause and remember. And then raise a glass of your favorite strawberry soda, the red symbolizing African American ingenuity and resilience, qualities representing Frank Crosswaith, and wish him a belated L’khayem! Afroamerikaner lebens zenen vikhtik. Read all about it in one of Frank Crosswaith’s favorite papers of record: The Forward.