A 4th of July walk with The Forward 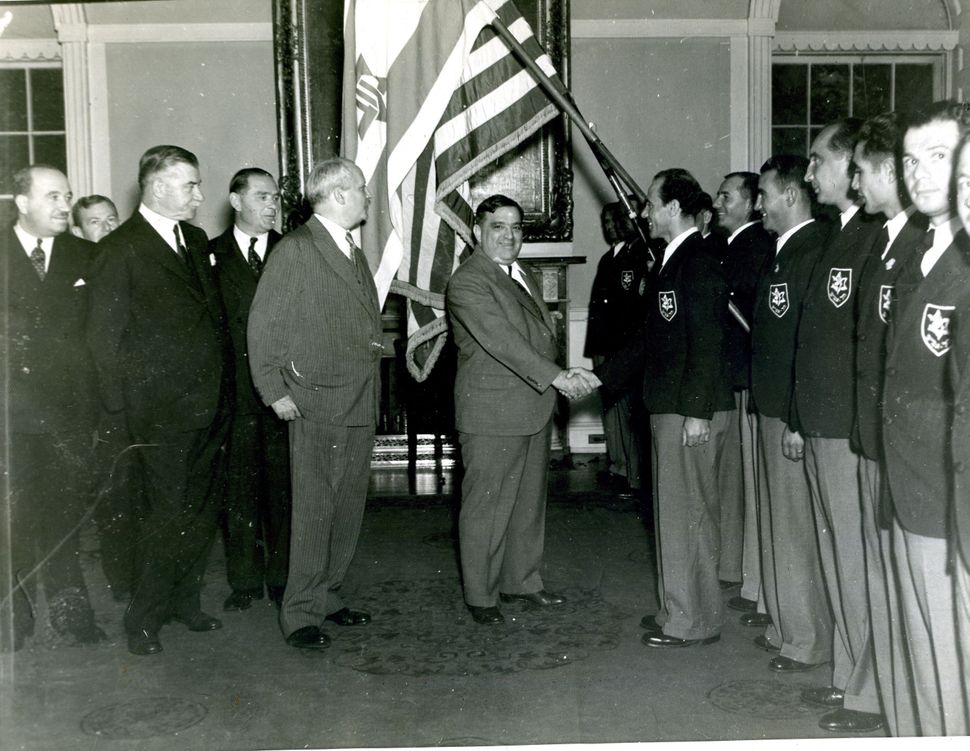 Mayor Fiorello La Guardia meeting members of the Jewish Athletic Organization Maccabi, who are wearing their official uniforms and holding both the American flag and the flag of the Maccabi organization. Image by The Forward

The Forward is one of 57 libraries, museums and city agencies, contributing to a new app called Urban Archive, helping make historical materials engaging and accessible. To celebrate the Fourth of July, we took a look at some of the most American, patriotic Forward photos of New York and arranged them into a walkable story. Read this one on your mobile phone and stop at all the historic spots in the story. For more, check out our Urban Archive collection.

Won’t you join us for a walk through New York City, tracing the steps of early immigrants exploring their new American lives?

Start way downtown in Manhattan, facing the East River with Ellis Island in view. We invite you to wonder about those who arrived here willingly— even desperately — and passed through the immigration hall at the notorious arrival port of Ellis Island, seen in the Forward’s archival image below.

In traditional Jewish lore, to look eastward with devotional intent is to open the heart to Jerusalem and to the source of all illumination. It’s a fitting way to begin our tour. 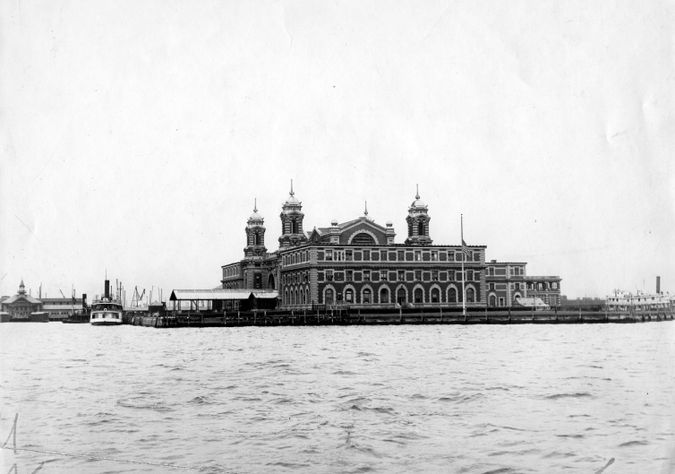 Ellis Island/Castle Garden, from across the river (New York, NY, c. 1930s) Image by The Forward

As early as 1903, a year after The Forward’s fifth anniversary, and a mere two days after Emma Lazarus’s pedestal poem “The New Colossus” was affixed to the Statue of Liberty in New York’s harbor, The Forward’s front page reported the suicide of a Jewish immigrant who had been turned away and forced back to Europe.

For over a century now, reporting on immigration and amplifying immigrant voices and concerns has remained important to the paper.

In the 1930s, after the passage of the restrictive Johnson-Reed immigration restriction act — severely restricting the arrival of ‘undesirables’ from Eastern Europe — the Forward devoted column inches to an advice column on being immigration called: The American Citizen. In it, union activist Henry Fruchter, of the Naturalization Aid League (located in the Forward Building) answered terrified Yiddish readers’ queries on their nascent citizenship rights.

One reader wrote in: I plan on traveling to Canada on vacation. Will they let me back in here when I return?

The Forward answered: You must first get re-entry papers. If you don’t, you’ll be considered a new immigrant and have to fit quota requirements. Come to our office, we’ll help you. 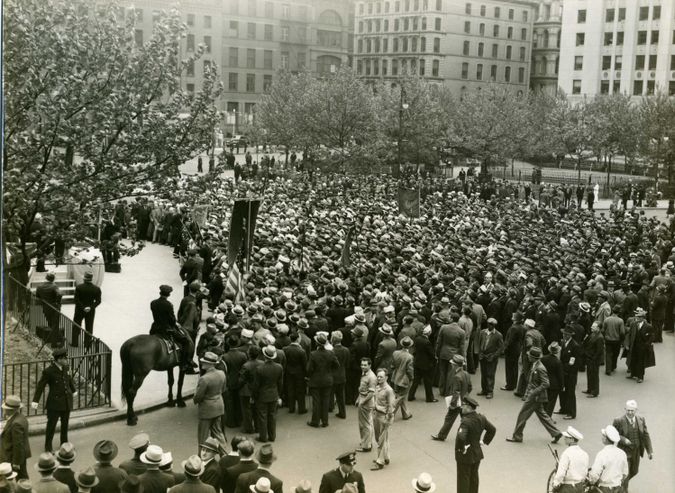 Now, turn your back to Ellis Island and head north, thinking about restrictions and quotas. Make your way to Foley Square, seen here, where so many citizens — newly arrived as well as American-born residents — celebrated their liberty by demanding equal rights as working Americans.

In the Forward’s image above, working folks crowd the heart of city governance in downtown New York City to celebrate labor’s progress with a 1938’s Union Label Parade.

Foley Square is a frequent locale for protest, demonstration and pride. In 2020, NYC’s Queer Liberation March For Black Lives Against Police Brutality stepped out from here towards Washington Square for a Pride rally. Shortly thereafter, they, like so many in history, were met by police violence. 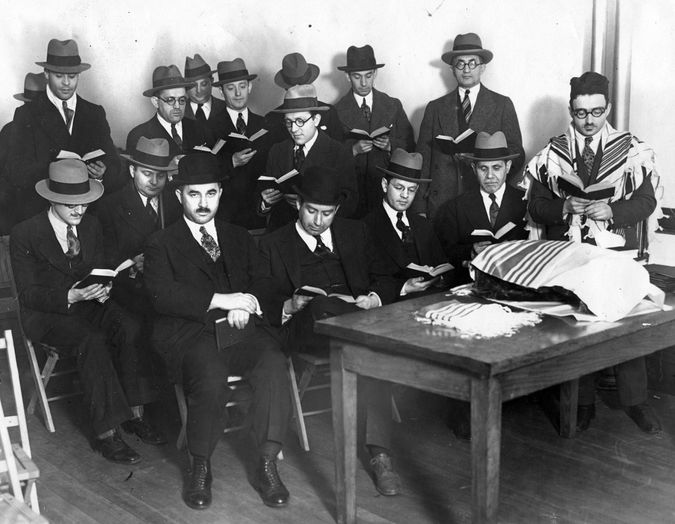 Group portrait of men wearing hats and holding prayer books and some in prayer shawls, with torah covered by prayer shawl on table in foreground. They are praying at the Wall Street synagogue in New York. (Wall St. Synagogue, NY, c. 1930s) Image by The Forward

Head a few blocks further east and a bit south from Foley Square, to Broadway and Duane streets — where the original downtown synagogue was founded. Known as the Wall Street Synagogue, it’s still around, but is located further south now, on Beekman Street.

While it’s handy to have a house of worship available near your work, if that’s your style, nowadays many Jewish workers in the Financial District (FiDi) seeking to pray during their workaday organize in-office Jewish prayer quorums, or ‘minyans,’ with co-religionist co-workers, if available. There’s even an app for that! 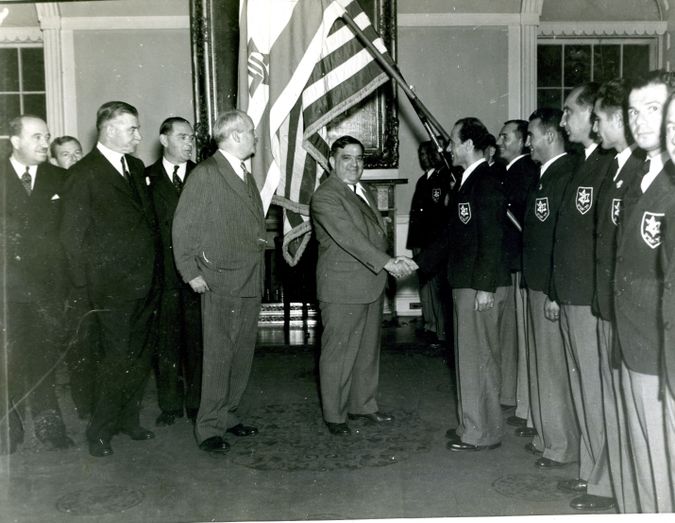 Mayor Fiorello La Guardia meeting members of the Jewish Athletic Organization Maccabi, who are wearing their official uniforms and holding both the American flag and the flag of the Maccabi organization. Image by The Forward

Mayor Fiorello La Guardia, who held the office from 1934-1945, was known as ‘the little flower’ for his Italian name and stature and considered warm and energetic and a uniter of a diverse city. In the image above, he’s seen welcoming the Maccabi Jewish athletic team to city hall when they played in New York City.

With the creep of fascist inclined Europe, and of course the 1936 Berlin Olympics under Hitler’s auspices as Chancellor, Jews were excluded from many sporting events. Independent athletic associations such as Maccabi were formed as a result. It’s still in existence today. 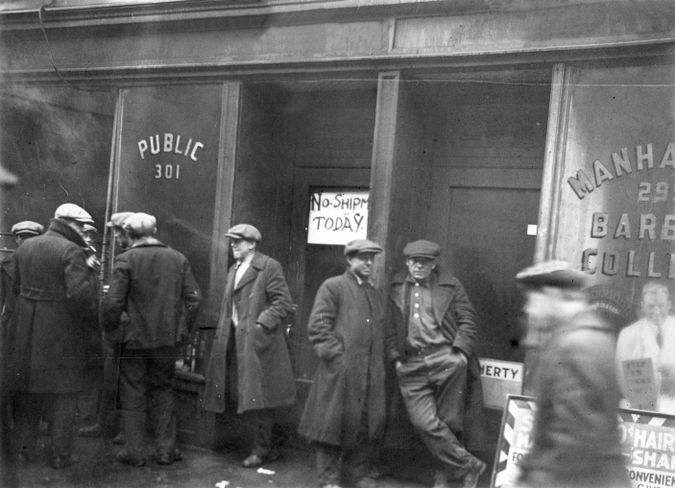 Group of men standing in front of a store window where a sign reads “No shipment today” (Lower East Side, c. 1920s-1930s) Image by The Forward

Head due north up and out of the city’s Financial District, watching the way the downtown neighborhood morphs into the more familiar one as Broadway crosses East Houston. Take a slight jog right until you find 301 Bowery, shown in our image above from the Depression era.

In the 1930s, it wasn’t uncommon for desperate and hungry city folks to gather on the Bowery, seeking jobs and relief from their poverty, a result of the Depression. The other signature feature of early 20th century Bowery is the Barber College seen on the far right.

A favorite passageway of sailors looking for a cut and a shave, the Bowery became home to haircutting schools and tattoo parlors. You can still find some there today. Despite recent gentrification, Bowery Street still features a historic mission for those in need of food and shelter. 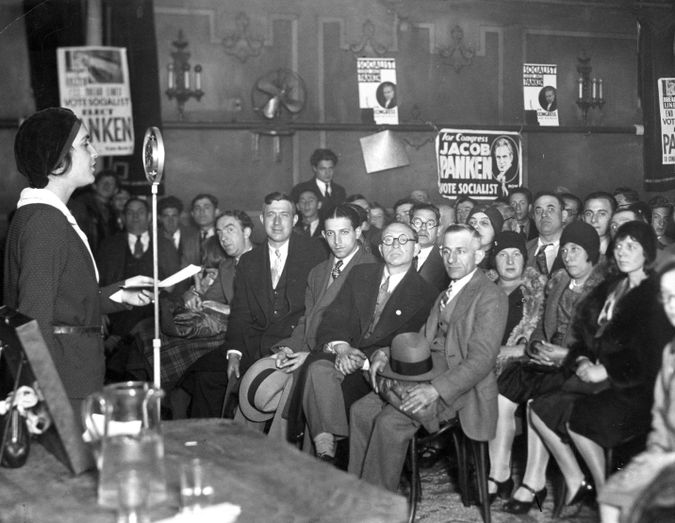 And now that you’ve made it somewhat more uptown (though still below 14th Street), you’re arrived in one of the most activist neighborhoods in the city.

In the Loisaida — Lower East Side and East Village — you’ll find a diverse neighborhood that’s still home to activism and what remains of the city’s affordability. It’s also home to the city’s famed poetry marathon at St. Mark’s Poetry Project.

As you stroll further up Bowery towards 2nd Avenue, head over to 9th Street, where the one-time Stuyvesant Casino housed some gamblers, sure, but also local pols telling folks about the issues of the day.

In this photo, Hemione Panken, daughter of Jewish socialist Judge Jacob Panken, campaigns for her dad’s run for congress. A longtime member of the Forward’s advisory board, Panken was also an immigrant to America. 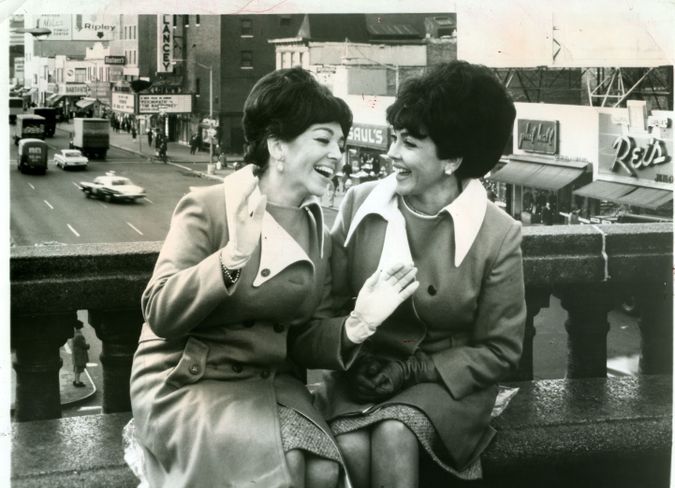 Finally, head southeast and climb the Williamsburg Bridge to take in just how far you and America have come. Like the folks you’ve walked beside in spirit on this journey, imagine a more just society as you gaze over the city. Imagine the Lazarus poem in Yiddish: ikh hoyb oyf mayn lomp iber der goldener tir. “I lift my lamp beside the golden door!”

Ruminate on the past while listening to the Yiddish harmonies of Forward favorites The Barry Sisters, pictured above on the same bridge. Hear their rendition of the classic Yiddish immigrant anthem Di Grine Kuzine, telling the story of a newly arrived immigrant — a ‘greenhorn’ — who, in time, discovers they’re not entirely at peace here despite their earlier enthusiasm.

A 4th of July walk with The Forward