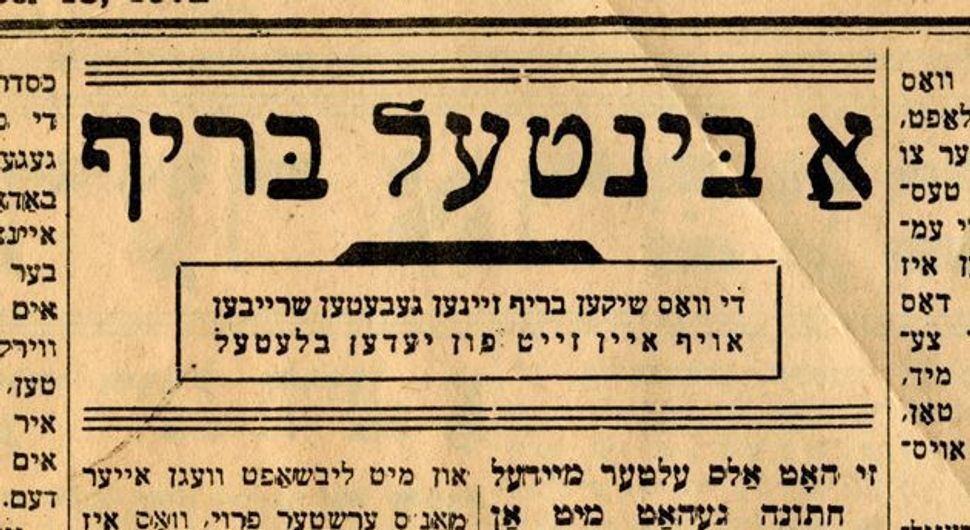 A Classic Column: By this time the Bintel Brief had been offering advice for almost 66 years. In this issue, November 13, 1972, an older woman married to a widower wanted to know how to handle the fact that he constantly compared her to his first wife. Image by FOrWArD ASSOCIATION

The original Bintel Brief column was founded at the Forward in 1906 and ran through the 1980s. Written in Yiddish, letter writers sought advice on heartbreak, poverty, religious quarrels, family disputes, love triangles and more.

Legacy Bintel revisits these original Bintel Brief letters. Many appear here in English for the first time. They have been researched and translated for this column by Chana Pollack.

This Week in Legacy Bintel:

I was drawn to this letter because it asks a question that many American workers are asking today, in this age of coronavirus: When the choice is either income or safety, how can I put my safety above feeding my family? For decades, such questions were at the heart of the Jewish experience in America, and we should take them up now with the same urgency and sorrow they provoked for readers in 1906.

As a daily Bintel Brief reader, I decided to ask you for advice.

I’m an 18-year-old boy. I’ve been in this country for one and a half years. I learned the iron-work trade and earn ten dollars weekly. Something about the trade is bothering me: I work outdoors on fire-escapes and railings and every minute my life is endangered.

Recently, about nine months ago, my uncle fell from the sixth floor staircase he was working on and was killed. He was 24 years old. Yesterday, myself and another man were working in a building on Eighth Street, putting up fire escapes. I made the holes in the walls where the fire escapes were to be hung and I fell from the second floor into the yard — but luckily it turned out well. This time I’d fallen from the second floor, but should I happen to be working on the sixth I could fall and die. That could well happen. One hand is in pain and I can’t really write this letter well.

The iron workers are constantly endangered. Two weeks ago, a man was killed. We had worked together in the same shop. My family won’t permit me to return to the trade, saying I should retrain in a different one, but I don’t know another one to try. I am skilled in this trade and don’t wish to quit it.

What should I do? My family won’t permit me to go back to work. If I try another type of work I’ll only earn four dollars daily. I too would say it’s been enough for me already if i were not sending money home to my mother. My father is here and doesn’t earn much. I’ve got to support them. I’ve sent for a sister who is already on the ship and will arrive penniless shortly. And when the girl arrives, we have to help get her a pair of shoes, a hat, a dress. We can’t step out here in clothes from the old country. What can be done with a mere four or five dollars weekly? Who can be supported with that?

Editor sir, don’t be angry that I write you so much as I can’t write any less. I ask you for your good counsel. Tell me what to do. Should I return to my dangerous trade or get into another line of work?

Angry? The writer could not make us angry. The heart must hurt when reading this letter. One must feel pained not because of its length but over the capitalist murder-system that is still ongoing! A young man who desires to be so brave and good and support his parents and sister must put his life in danger, and go to work daily in the heights from which he’s already fallen. He witnessed his young uncle’s death that way, and must be silent about it! When setting out to work, his heart contracts with fear about having to earn a living, but also suffers fear when thinking about not going to work. This system is cursed.

Who could seek to advise a young person to put his life under the gun? The truth is, if he doesn’t do it, someone else will. But someone with nerves of steel would be better preserved by his confidence, whereas anyone who is already unnerved is in particularly grave danger. We advise the writer not to endanger his life. He can find another occupation in the iron trade. That is our wish for him.