Menu
HomePainting as Prayer in Poland
Image by Yari Wolinsky

This summer I traveled for the first time to Poland, where my grandparents were born, to help recreate an 18th-century wooden synagogue from the town of Gwoździec. This trip was an expression of a deep desire to connect with my own “Polishness.” I wanted to engage in a creative activity in a place often associated only with destruction and loss. I was compelled, also, to make a tangible contribution to Polish life; the Gwoździec replica, which includes a roof structure, a painted dome ceiling and a bimah, will be showcased in the Museum of the History of Polish Jews, opening in Warsaw in 2013.

In July, I joined a group of mainly art students from the United States and a handful of young Poles for a workshop in the town of Szczebrzeszyn hosted by Handshouse Studio, a Massachusetts-based arts organization conducting a decades-long project to rebuild Polish wooden synagogues that were destroyed by the Nazis.

The Handshouse core team, a group of about 15 professional artists, led us in recreating the vibrant ceiling murals of the Gwoździec synagogue. The section we worked on features a griffin and a dragon in a fighting embrace surrounded by a network of vines and stylized flowers. A lower band of the mural depicts several beasts including a leopard, a turkey and a deer.

With awe, I watched the Handshouse team, who had spent years dedicated to remaking the Gwoździec synagogue. Only one of them had Jewish heritage. Among them, I felt both bolstered and weighed down by my background.

Szczebrzeszyn is 113 miles from Lutsk, where my grandfather was born. He was an artist who never realized his dream of attending art school. He escaped the Nazis by fleeing with his father and uncle to the Soviet Union. After the war, he opened an engraving shop in Los Angeles, supporting his family by the work of his fine hands. I inherited his eye, if not his raw talent, and channeled the family business of color and form into a career as a curator and producer.

As the Handshouse team doled out the tasks, someone suggested I help with Hebrew text. But I desperately wanted to paint a flower. My Hebrew name is Vered, or “rose.” It is a reference to my zayde’s sister’s name, Blumeh, which means “flower” in Yiddish. When the men in her family fled, Blumeh followed them but was sent back home to her mother and little brother to wait out the war. Instead, the war came for them. Blumeh was just 15. Among the blossoms on the ceiling would be my quiet tribute — a bloom for Blumeh.

A peculiar flower was assigned to me — a bulbous green pod with curled tips, resting on wide red petals. One of the experienced “painting leaders” patiently instructed me to layer colors and blend them using rabbit skin glue. When the time came to work on the actual panels, my hands trembled and I recalled my initial poetic notion of invoking my zayde’s assured artistry to guide me. But in actuality, it was not easy painting with ghosts at my back.

The Handshouse synagogue project, helmed by sculptors Rick and Laura Brown, is fueled by curiosity and conviction resembling faith. During those two weeks in July, ritual abounded in the shul-turned-studio: Our team rhythmically traced shapes, laid down background colors and ground powder pigments into paint. Instead of talmudic debates, we engaged in a “colorscape chevruta.” Painting leaders argued over the quality of a brushstroke or the details of the color scheme, using archival black-and-white photos of the synagogue and the few remaining pre-1914 color sketches to guide them. The devout and these artists have much in common: patience, dedication, fidelity to tradition and commitment to a legacy. But while they were devoted to artistry, I was yearning for a deeper connection to a place I wanted to claim as my own.

With all our energy focused on the decorated ceiling of the Gwoździec synagogue, we often forgot to “look down” to the space that cannot be recreated: the place where the congregation gathered, where their voices lifted to meet the fanciful forms gracing that ceiling. I wanted to be with those people — to grasp why they built this elaborate house of worship, not just how. But by focusing on the massive devastation brought upon the Jews, it’s easy to overlook the reality that new synagogues are built around the world every year. New Jewish communities continue to rise up, even in Poland.

Between the push-and-pull of doing and discovering, I felt, at any given moment during my time with the Handshouse team, a mixture of pride, frustration, admiration and isolation. Perhaps what I was looking for — a textured experience of a Jewish past and present in my family’s ancestral home — could not actually be found in this art project.

But I did find Blumeh. After carrying her story with me since birth, I finally spent time with her in the form of a funny little flower. And I found a new understanding of my grandfather — of his loss, his resilience, his courage and his pressing impulse to create art.

Evelyn Tauben is an independent curator, producer and writer based in Toronto. Her work is largely focused on new Jewish culture. 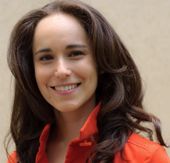 Painting as Prayer in Poland

Painting as Prayer in Poland