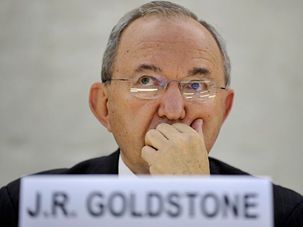 Judge Richard Goldstone’s recent acknowledgement that “civilians were not intentionally targeted as a matter of policy” by Israel during Operation Cast Lead could be a game changer — if Goldstone continues to do the right thing.

No election in recent history has been more important to the future of our constitutional rights than the current presidential contest. Our next president will have enormous influence on the direction of the Supreme Court.

Spitzer Has Sinned, But It's Our Sex Obsession That's Criminal

When Eliot Spitzer was my research assistant in the 1980s, he was a young man of great brilliance, high integrity, conservative demeanor and enormous promise. It pains me deeply to see him brought down so far, and so quickly, by private sexual misconduct.

When it came to basketball, Red Auerbach — architect of the Boston Celtics’ 16 championship teams — was a maven’s maven. He knew more about the game than anyone, and he used his knowledge more effectively than any basketball coach or general manager in history, and led the way in opening up the league to black players and black coaches. He was a fierce competitor who couldn’t stand to lose. And when he was the coach he rarely did, winning a record eight consecutive titles starting in the 1958-59 season.

Terrorism certainly didn’t begin with Yasser Arafat. It has its roots deep in history, from the Jewish Zealots-Sicarii during the Roman occupation, to the Hindu Thugees who strangled their enemies over the centuries, to the medieval Islamic Hashishins who prepared for assassinating political opponents by smoking hashish.But

Intelligence reports about Iran’s capacity to produce nuclear weapons aimed at Israel are becoming ominous. Unless diplomatic pressure causes the Iranian mullahs to stop the project, Iran may be ready to deliver nuclear bombs against Israeli civilian targets within a few short years. Some Iranian leaders, such as former president Hashemi

Israel’s targeted killing of the wheelchair-bound head of Hamas, Sheikh Ahmed Yassin, predictably has drawn a hail of criticism from the international community. British Foreign Secretary Jack Straw characterized the killing of Yassin as “unlawful”; the Vatican said it was “not justified in any state [run by] the rule of law” and

Sticking With the Dems

Jews have historically voted their memories rather than their pocketbooks. The memory of our immigrant status, of our poverty and of the opportunities afforded us by this great nation has always led us to favor candidates who are committed to repairing the world rather than increasing corporate profits, and to distributing justice rather