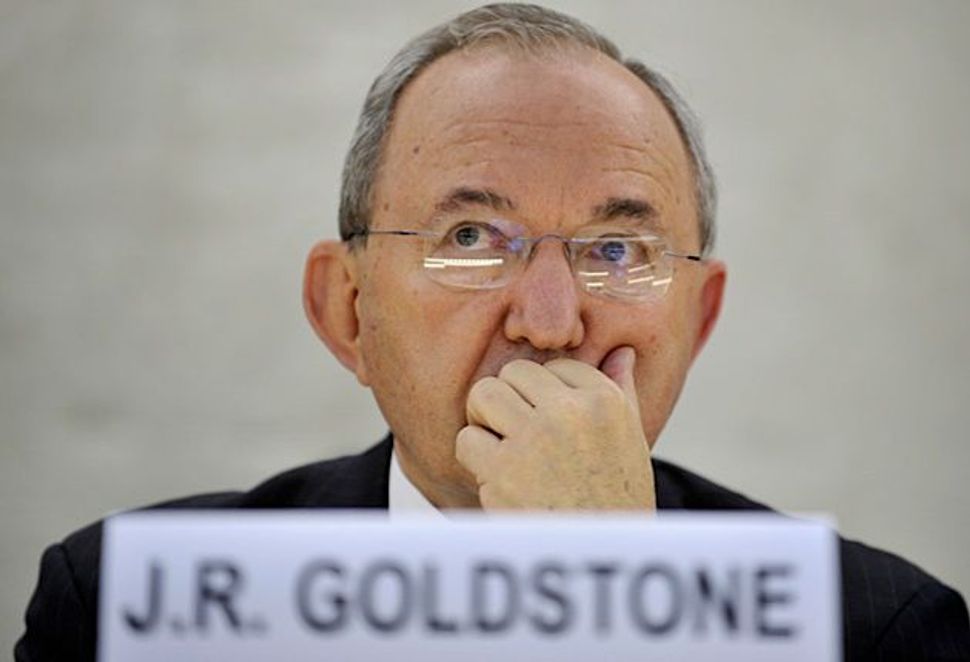 Judge Richard Goldstone’s recent acknowledgement that “civilians were not intentionally targeted as a matter of policy” by Israel during Operation Cast Lead could be a game changer — if Goldstone continues to do the right thing.

Goldstone’s reassessment of the conclusions reached in the Goldstone Report pulls the rug out from under those who are currently using the report as a centerpiece of their efforts to accuse Israel of war crimes, to delegitimize the Jewish state in the court of public opinion, to impose boycotts and to suggest a moral equivalence between the democratic nation of Israel and the terrorist-group-cum-“government” of Hamas.

Citing new evidence and reports, the carefully selected chairman of the United Nations Fact Finding Mission on the Gaza Conflict — picked by the U.N. precisely because he was a Jewish international lawyer of some repute who would lend credibility to the widely discredited U.N. Human Rights Council — has now declared in a Washington Post opinion article that “if I had known then what I know now, the Goldstone report would have been a different document.”

Based on what we know today — as a result of numerous credible investigations by NGOs, individual experts, the media, the Israeli military, even a United Nations task force — there is absolutely no justification for the International Criminal Court or any other organization opening an investigation against Israel or imposing sanctions on the Jewish state. Indeed, it has now become clear that Col. Richard Kemp, the former commander of British forces in Afghanistan and a recognized military expert on terrorists who hide among civilians, was correct when he offered the following testimony, which the Goldstone commission refused to accept:

[F]rom my knowledge of the IDF and from the extent to which I have been following the current operation, I don’t think there has ever been a time in the history of warfare when any army has made more efforts to reduce civilian casualties and deaths of innocent people than the IDF is doing today in Gaza.…

Hamas factor in the uses of the population as a major part of their defensive plan. So even though as I say, Israel, the IDF, has taken enormous steps… to reduce civilian casualties, it is impossible, it is impossible to stop that happening when the enemy has been using civilians as a human shield.

As I demonstrated in a 50-page analysis of the original Goldstone Report, published immediately after it was issued, the commission applied unacceptably different standards of evidence in evaluating Israeli as distinguished from Hamas’s actions and intentions. A careful reading of the original report — an exercise few supporters or critics bothered to engage in — demonstrates both the bias and sloppiness of its authors.

Now its chief author has acknowledged that its central conclusion that Israel deliberately targeted civilians for death is not supported by the evidence. He has also acknowledged that the Israeli government is fully capable of dealing with charges that certain military personnel may have been negligent. If this is true, then the International Criminal Court cannot exercise jurisdiction over Israel in this matter and must drop the case, because the treaty under which the court operates authorizes it to prosecute only countries that are unwilling or unable to conduct their own investigations. Hamas, on the other hand, as Goldstone now notes, has shown a total unwillingness to investigate credible charges that it engaged in repeated war crimes.

Goldstone now has a responsibility to report his new conclusions to the chief prosecutor of the International Criminal Court and to other officials who are considering acting on the basis of the Goldstone Report. Although the report did not purport to make judicial findings of fact, demonizers of Israel, such as Archbishop Desmond Tutu, have used the report as a bludgeon against Israel, demanding boycott, divestment and other forms of delegitimizing sanctions. Goldstone has a moral and legal obligation to tell those who are treating the original report as if its findings were conclusive that even its primary author currently finds them unworthy of belief. It remains to be seen whether Goldstone will carry through on these obligations.

What then is there to say about Goldstone the man? When his report was first issued, I wrote critically not only of it, but of him. I knew Goldstone as a colleague at Harvard, and I was disappointed in him for lending his credibility to so biased and mendacious a report.

I am sure he will say that he was right then and he is right now, because the evidence has changed. Though I disagree with that assessment, I commend Goldstone for his willingness to consider new information and to reassess his conclusions. The Goldstone Report did much harm by lending an aura of credibility to some of the most defamatory and false charges ever made against Israel and its defense forces. But the Jewish tradition of teshuvah, or repentance, demands that we look forward, not backward. It also demands that the person seeking teshuvah do everything in his power to right the wrong he has committed.

I hope that Goldstone will stand up against those who continue to rely on his original, now discredited, conclusions in seeking the delegitimation of Israel through boycotts, divestment and other sanctions. I maintain an open mind. I hope Richard Goldstone does not disappoint me again. I have a feeling he will continue to do the right thing.

Alan M. Dershowitz is the Felix Frankfurter Professor at Harvard Law School and the author of “The Case for Moral Clarity: Israel, Hamas and Gaza” (CAMERA, 2009) and the novel “The Trials of Zion” (Grand Central Publishing, 2010).