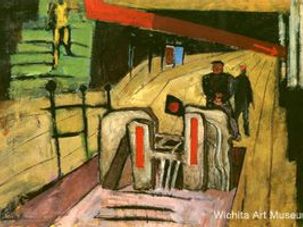 Joseph Solman, one of New York’s best and now nearly legendary painters, turns 98 this year. I don’t know if he still paints. The last thing I read about him was a 1999 New York Times article by Michael Kimmelman, which reported that the then-90-year-old artist was still working away in a “cluttered studio above the Second Avenue Deli in the East Village of Manhattan.” Indeed, as I have been glad to ascertain, the artist’s name does appear in small print on the tenant register of the building’s facade. It’s a humble reference for a fabulously gifted yet woefully underappreciated American master.

There are three distinct, echoing voices in Michael Hafftka’s newly issued book: a writer, a visual artist and a son of Holocaust survivors. Understandably, this trio makes for a complex, even conflicted, aesthetic. And indeed, “Conscious/Unconscious,” interspersing 27 of Hafftka’s drawings with 56 rambling, phantasmagoric tales — has conflict written all over it. “Narrated in the first person,” as the book cover says, and “weaving an inner life made real by paradoxes and conflicted drives,” these whimsical, sketchlike stories surge with bohemian misadventures while remaining, at bottom, immersed in the vast shadow of the Holocaust.